March 19th marked the 5th anniversary of the first African-American President unilaterally, and without provocation, ordering the U.S. “Shock and Awe” bombing the crap out of his African brothers and sisters in the sovereign North African nation of Libya. Not only that, he did so without even bothering to go to Congress and, at least, lie to them like his predecessor President George W. Bush did with his own “Shock and Awe” bombing of Iraq 8 years earlier. Just a few days after the bombing of Libya I spoke about it with Joyce Riley, host of the popular nationally syndicated radio show The Power Hour. See here.

The horrific destruction and loss of life and order in Libya over the 5 years since Obama’s “Shock and Awe”, along with the exporting of its growing destabilizing violence to Syria and Iraq, is pretty clear. However, we also need to recognize … and more importantly, learn the lesson from … how the “anti-war” organizations’ refusal to call for President’s Obama’s impeachment following his blatantly illegal March 19, 2011, bombing of Libya has allowed for Obama to do the same with Syria and Iraq again with even less resistance and with total impunity to the point of risking World War III. 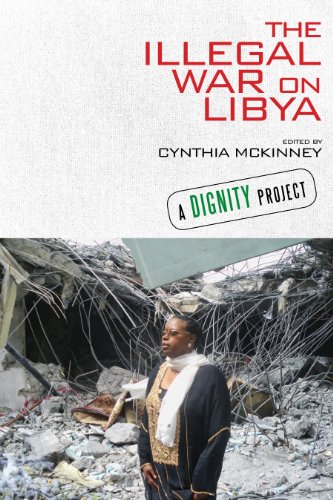 Former U.S. Congresswoman Cynthia McKinney publicly endorsed our Central Florida chapter of Veterans For Peace’s resolution calling for the impeachment of President Obama for war crimes on that very day (March 19, 2011) in a prompt and direct response to my email to her asking for her public endorsement. Dr. McKinney was actually in Libya at the time with a delegation witnessing the U.S./NATO bombing of Libya, as was later documented in the 2012 book The Illegal War on Libya which Cynthia McKinney edited.

International Law Professor Francis Boyle had already endorsed our Impeach Obama for War Crimes resolution in 2010. Later that summer it was voted down for the 2nd year in a row at the Veterans For Peace national convention … however with much more support for it than when it was first presented to us at the 2009 VFP national convention. Following the “Shock and Awe” bombing of March 19, 2011, Professor Boyle was quick to initiate a campaign calling for the impeachment of President Obama over his illegal and unprovoked attack on Libya and made an excellent case for it on the Jack Blood Show a week or so afterwards, on March 30, 2011. See here.

Larry Pinkney, a former Black Panther and 10-year political prisoner, ran the article “Is it time to impeach Obama?” in his “Keeping it Real with Larry Pinkney” column in the Black Commentator on July 21, 2011, calling for President Obama’s impeachment for the same war crimes, and then some, cited in Veterans For Peace’s and other “anti-war” organizations’ prior calls for impeaching President Bush.

It should be noted that Larry Pinkney also promptly and very publicly endorsed our Central Florida chapter of Veterans For Peace resolution calling for the impeachment of President Obama for war crimes; and it was just weeks later that the rank and file membership of Veterans For Peace passed the resolution at its national convention on the 3rd year in a row that it had been up for a vote. However, the national leadership of Veterans For Peace refused to send the same official letter to the members of Congress calling for impeachment proceedings of the Democrat President Barack Obama, let alone alert the media and make a public call for it, as they had so strongly done for their earlier resolution to impeach Republican President George W. Bush. See the timeline here.

I’m firmly convinced that the “anti-war” organizations totally blew a fantastic opportunity to actually have slowed, if not stopped, the 9/11 Wars with their refusal to apply to the Democrat War Criminal President Obama the same standard they had set with their prior case for impeaching the Republican War Criminal President George W. Bush followed by a strong public call for it. Of course in our 2-party political structure, the so-called “left” calling for the impeachment of a Republican President would not likely lead to an actual removal of the Republican President from office unless members of Congress from the same party would significantly join in the call for his impeachment. Not surprisingly, that turned out to be the case in the antiwar left’s strong and just public call for impeaching Republican President George W. Bush.

Again, the so-called “anti-war” organizations after having spent years making the clear and compelling case for impeachment of the Republican President George W. Bush for his illegal invasions and wars of aggression (the 9/11 Wars) now had the opportunity of a lifetime to finally rein in the position of the U.S. President’s ability to wage such illegal wars with impunity simply by applying the same standard of the same public call for impeachment to the Democrat President Obama for his own command over and continuation of those same illegal wars … not to mention his initiating even more of his own illegal wars, invasions and related war crimes. See “Impeach Now or Forever Hold Up Peace” from June 27, 2011. Instead, the national leadership of Veterans For Peace, along with other organizations from the “antiwar” left, not only chose not to call for Obama’s impeachment but actively suppressed such calls from its rank and file.

If the so-called “antiwar” left had called for impeaching the Democrat War Criminal President Obama for the same crimes cited in its prior call for impeaching the Republican War Criminal President Bush, there would be nowhere to pass the political football, the partisanship would be out the window, the people’s remedy of impeachment would have teeth again and the office of the President of the United States would actually have to face accountability for its illegal actions. As a result, of the “left cover” provided the Democrat War Criminal President Obama over the past 7+ years, the ability of anyone … Democrat, Republican or whatever … occupying the office of President of the United States to bomb and kill whomever, wherever, and whenever he wants with total impunity has been firmly established in practice.

I can’t help but think of all the Gold Star Mothers, and mothers “over there”, who have been added to the ranks since our Central Florida chapter of Veterans For Peace’s first call for impeachment of the Democrat War Criminal Obama following the publication of former CFVFP member Tom Santoni’s “IMPEACH OBAMA!” article written February 2, 2009 in response to President Obama’s unilateral, illegal … and without provocation … deadly drone-bombing of unsuspecting targets in Pakistan. I can’t help but wonder if the “antiwar” movement had put adherence to principle above loyalty to political party and ideology and joined our legitimate call for impeaching President Obama at that time, would the widespread practice … and to a troubling extent, acceptance … of drone bombing anyone, anywhere and at anytime simply because the President of the United States or one of his underlings says so be what it is today.

The harm is done by the stubborn partisanship of the “anti-war” left … both in the death and destruction abroad and in the neutralizing of the “power of the people” here at home, in particular, the people’s constitutional remedy of impeachment … needs to be acknowledged and widely discussed.

For those interested in hearing more of my commentaries regarding this issue, please take a listen to the following clips.

Re-Invading Iraq and the Failure of Antiwar Orgs (6:55 min)

VFP Calls to Impeach Obama for his War Crimes (8:42 min)

Philip Restino [send him mail] Port Orange, FL is spokesperson for the Central Florida chapter of the national peace, truth and justice organization We Are Change. For more information, please visit https://www.facebook.com/WeAreChangeCFL or call (386) 788-2918.