The Magic of Mushrooms

There is, perhaps, no other food source surrounded by such mystery and magic as mushrooms. In the videos above, leading mycologist Paul Stamets gives a glimpse into some of the roles medicinal mushrooms play in health, such as activating your immune system and potentially fighting cancer.

Mushrooms may even help to save the world by:

Mushrooms are actually the fruit of mycelium, which is a “filamentous, cobweb-like cellular network.” As Stamets explained:1

“The cobwebby mycelium exudes enormous suites of enzymes, antimicrobial agents, antiviral compounds, as it grows in the ground beneath our feet and in the forests around us. Mycelium is the cellular foundation of our food webs, creating the rich soils so necessary for life.

Mycelium is a digestive membrane that also destroys many environmental toxic wastes, and has spawned a new science — called “Mycoremediation” … Partnering with mycelium improves environmental health — outside and inside our body.”

When mycelium produces its fruits, the resulting mushrooms last only a few days, which adds to the excitement for wild mushroom hunters.

Mushroom Hunting Is Not for the Faint Hearted

Writing in The New York Times, University of Cambridge professor Helen Macdonald explains some of the magic – and danger — one may feel when out hunting for mushrooms:2

“When you collect edible fungi, your expertise in identification is all that keeps you from death or serious illness. There’s a daredevil side to it, a sense of repeatedly staking your life against terrifying possibilities.

Today’s vogue for wild foods, spurred in part by famous foraging chefs and a nostalgic desire to reconnect with the natural world, has resulted in some popular guides that feature a selection of edible and poisonous species.

Nick [emeritus professor of the history of science and amateur mycologist] thinks they are irresponsible, even dangerous. ”They don’t explain the full range of things you might be running into,” he warns.

Many toxic fungi closely resemble edible ones, and differentiating each from each requires careful examination, dogged determination and the inspection of spores stained and measured under a microscope slide.”

Mushrooms are incredibly diverse in shape, color and texture, even among members of the same species. Adding to their mystery, of the 140,000 species of mushroom-forming fungi, science is familiar with only 10 percent, according to Stamets.

Mushrooms are nature’s recycling system. If it weren’t for mushrooms, we wouldn’t have plants, because mushrooms (and their “parent” mycelium) break down rocks and organic matter, turning them into soil that provides the framework to nourish plants.

They even help to make it rain (watch the video above to find out how). When two compatible mycelia combine, the resulting mycelium occasionally forms fruiting bodies called mushrooms.

The mushrooms make spores, which fly away to make new mycelial colonies, and the lifecycle is complete. Mycelial mats can be too small to see or cover vast areas of ground.

Their extreme tenacity makes the soil spongy and able to support 30,000 times its weight. A single cubic inch of soil can contain 8 miles of mycelium cells. The largest living organism on Earth is a mycelium in Eastern Oregon that covers 2,200 acres, is one cell wall thick and 2,000 years old.

Stamets believes fungal mycelia and the intricate, branching network they form to function as “the Earth’s Internet,” a complex communication highway that is sort of Mother Nature’s neural net. In some ways, mycelia are “sentient” and seem to demonstrate learning.

If one pathway is broken, it develops an alternate path. According to Stamets, when you step on it, it knows you’re there and “leaps up” in the aftermath of your footstep, trying to grab debris. The mycelia—not just the mushrooms—contain many of the healing agents for which mushrooms are revered.

Some supplements offer the added boon of including the mycelia of the mushroom for its added health benefits, including potentially enhancing energy production and focus.

Can Mushrooms Fight or Prevent Cancer?

About 100 species of mushrooms are being studied for their health-promoting benefits. Of those 100, about a half dozen really stand out for their ability to deliver a tremendous boost to your immune system, which might, in turn, help fight or prevent cancer.

Long chain polysaccharides, particularly alpha and beta glucan molecules, are primarily responsible for mushrooms’ beneficial effect on your immune system. In one study, adding one or two servings of dried shiitake mushrooms was found to have a beneficial, modulating effect on immune system function.3

One particularly unique mushroom, Cordyceps, also called caterpillar fungus or Tochukasu, has anti-tumor properties. This parasitic mushroom is unique because, in the wild, it grows out of an insect host instead of a plant host. It has long been used in both traditional Chinese and Tibetan medicine.

Scientists at The University of Nottingham have been studying cordycepin, one of the active medicinal compounds found in these fungi, as a potential cancer drug.4 A protein extract from turkey tail mushrooms is also being used to boost cancer patients’ immune function in countries including Japan.5 Mushrooms may also have direct anti-cancer effects. For instance:

Ganoderma lucidum is a medicinal mushroom commonly known as lingzhi in China and reishi in Japan. One of its more useful compounds is ganoderic acid (a triterpenoid), which is being used to treat lung cancer, leukemia and other cancers.11

However, it also shows promise for helping to reduce obesity. Mice fed an unhealthy diet reached 42 grams in weight after two months. However, when the mice were also fed a high dose of the mushroom extract, they only reached 35 grams. Levels of inflammation and insulin resistance were also reduced.12

It’s thought the reishi mushroom extract reduces obesity in mice by modulating the composition of their gut microbiota. The mushroom acts as a form of prebiotics that encourages the growth of beneficial microbes. According to Stamets:13

“Mycelium’s selection of bacteria, in the creation of guilds of microbes, is essential for the mycelium’s survival. The mycelium chooses suites of bacteria that not only helps it digest food, and stave off predators, but also helps the plant communities that give rise to the ecosystems in which the mycelium resides, so fruits (mushrooms) can be produced.

Recent research now shows the consumption of Reishi and Turkey Tail mushrooms not only boost the immune system, but also balance the microbiome in favor of these beneficial bacteria, resulting in better digestion, and, amazingly, potential weight loss!”

Most mushrooms are about 90 percent water by weight, but what makes up the remaining 10 percent is nothing short of amazing. Mushrooms contain protein, fiber and a small amount of fat, along with vitamins and minerals including potassium, calcium, phosphorus, magnesium, selenium, and zinc.

They also contain many bioactive molecules, including terpenoids, steroids, phenols, and all of the essential amino acids (they’re especially good sources of lysine and leucine). Mushrooms also contain polysaccharides, which have a variety of beneficial properties, including:

It’s easy to understand why mushrooms have been valued for their medicinal properties for centuries. In ancient Egypt, for instance, mushrooms were thought to bring long life, and today we know that this may be due to the many beneficial phytochemicals and other compounds they contain.

According to Herbal Medicine: Biomolecular and Clinical Aspects in regard to reishi mushrooms, for example:14 ” … there are data that support its positive health benefits, including anticancer effects; blood glucose regulation; antioxidant, antibacterial, and antiviral effects; and protection against liver and gastric injury.”

There are even antioxidants that are unique to mushrooms. One such antioxidant is ergothioneine, which scientists are now beginning to recognize as a ‘master antioxidant.’ Mushrooms also provide valuable nutrients than many are deficient in, including B vitamins like riboflavin, niacin, and pantothenic acid.

One dietary analysis found that mushroom consumption was associated with better diet quality and improved nutrition.15 The beta-glucan in mushrooms even plays a role in fat metabolism and may help support healthy cholesterol levels. For more information, check out the infographic below. 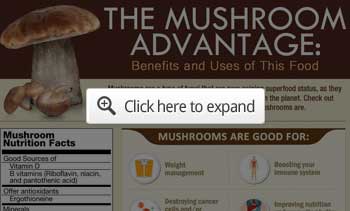 Choose Organic Mushrooms or Grow Your Own

Mushrooms are a wonderful, healthy addition to your diet but do make sure they’re organically grown, as their flesh easily absorbs air and soil contaminants. Also, avoid picking mushrooms in the wild unless you are absolutely sure you know what you’re picking.

There are a number of toxic mushrooms, and it’s easy to get them confused unless you have a lot of experience and know what to look for. Growing your own is an excellent option and a far safer alternative to picking wild mushrooms.

America’s Other Drinking Problem What Became of Atlantis?