Empire of Chaos Preparing for More Fireworks in 2016

In his seminal ‘Fall of Rome: And the End of Civilization,’ Bryan Ward-Perkins writes, “Romans before the fall were as certain as we are today that their world would continue forever… They were wrong. We would be wise not to repeat their complacency.”

The Empire of Chaos, today, is not about complacency. It’s about hubris – and fear. Ever since the start of the Cold War the crucial question has been who would control the great trading networks of Eurasia – or the “heartland”, according to Sir Halford John Mackinder (1861–1947), the father of geopolitics. 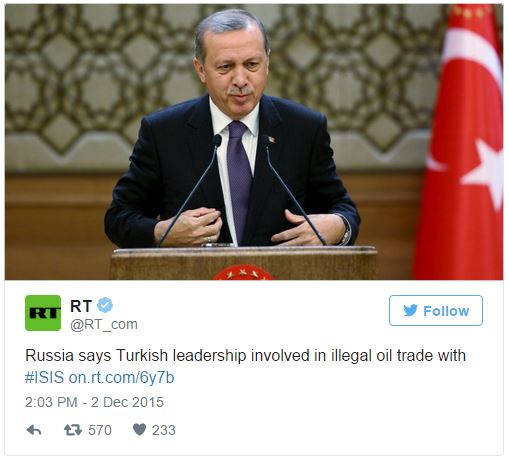 We could say that for the Empire of Chaos, the game really started with the CIA-backed coup in Iran in 1953, when the US finally encountered, face to face, that famed Eurasia crisscrossed for centuries by the Silk Road(s), and set out to conquer them all.

Only six decades later, it’s clear there won’t be an American Silk Road in the 21st century, but rather, just like its ancient predecessor, a Chinese one. Beijing’s push for what it calls “One Belt, One Road” is inbuilt in the 21st-century conflict between the declining empire and Eurasia integration. Key subplots include perennial NATO expansion and the empire’s obsession in creating a war zone out of the South China Sea.

As the Beijing-Moscow strategic partnership analyses it, the oligarchic elites who really run the Empire of Chaos are bent on the encirclement of Eurasia – considering they may be largely excluded from an integration process based on trade, commerce and advanced communication links.

Beijing and Moscow clearly identify provocation after provocation, coupled with relentless demonization. But they won’t be trapped, as they’re both playing a very long game.

It’s only a thread away

France’s Hollande met Obama. But then Hollande met Putin. Erdogan was under the illusion he fabricated the perfect pretext for a NATO war, to be launched following Article 5 of the NATO Charter. Not by accident failed state Ukraine was the only country to endorse – in haste – the downing of the Su-24. Yet NATO itself recoiled – somewhat in horror; the empire was not ready for nuclear war.

At least not yet. Napoleon knew history turns on a slender thread. As much as Cold War 2.0 remains in effect we were, and will remain, just a thread away from nuclear war.

Whatever happens in the so-called Syrian peace process the proxy war between Washington and Moscow will continue. Hubristic US Think-Tank Land  can’t see it any other way.

Russia literally bombed all these elaborate plans to ashes because the next step after partition would feature Ankara, Riyadh – and a “leading from behind” Washington – pushing a Jihadi Highway all the way north to the Caucasus as well as Central Asia and Xinjiang (there are already at least 300 Uyghurs fighting for ISIS/ISIL/Daesh.) When all else fails, nothing like a Jihadi Highway plunged as a dagger in the body of Eurasia integration.

In the Chinese front, whatever “creative” provocations the Empire of Chaos may come up with, they won’t derail Beijing’s aims in the South China Sea – that vast basin crammed with unexplored oil and gas wealth and prime naval highway to and from China. Beijing is inevitably configuring itself by 2020 as a formidable haiyang qiangguo – a naval power.

Washington may supply $250 million in military “aid” to Vietnam, Philippines, Indonesia and Malaysia for the next two years, but that’s mostly irrelevant. Whatever “creative” imperial ideas would have to take into account, for instance, the DF-21D “carrier killer” ballistic missile, with a 2,500 km range and capable of carrying a nuclear warhead.

On the economic front, Washington-Beijing will remain prime proxy war territory. Washington pushes the TPP – or NATO on trade pivoting to Asia? It’s still a Sisyphean task, because the 12 member nations need to ratify it, not least the US featuring an extremely hostile Congress.

Against this American one-trick pony, Xi Jinping, for his part, is deploying a complex three-pronged strategy; China’s own counterpunch to the TPP, the Free Trade Area of the Asia-Pacific (FTAAP); the immensely ambitious “One Belt, One Road”; and the means to finance a tsunami of projects, the Asian Infrastructure Investment Bank (AIIB) – the Chinese counter-punch to the World Bank and the US-Japan-controlled Asian Development Bank (ADB).

For Southeast Asia, for instance, the numbers tell the story. Last year, China was the top ASEAN partner, to the tune of $367 billion. This will grow exponentially with One Belt, One Road – which will absorb $200 billion in Chinese investment up to 2018.

Prospects for Europe are nothing but bleak. French-Iranian researcher Farhad Khosrokhavar has been one of the few who identified the crux of the problem. A jihadi reserve army across Europe will continue to feed on batallions of excluded youth in poor inner cities. There is no evidence EU neoliberalcons will be fostering sound socio-economic policies to extract these alienated masses from the ghettos, employing new forms of socialization.

So the escape route will continue to be a virus-like version of Salafi-jihadism, sold by wily, PR-savvy profiteers as a symbol of resistance; the only counter-ideology available on the market. Khosrokhavar defined it as the neo-umma – an “effervescent community that never existed historically”, but now openly inviting any young European, Muslim or otherwise, afflicted by an identity crisis.

In parallel, on our way into a full 15 years of the endless neocon war against independent states in the Middle East, the Pentagon will be turbo-charging an unlimited expansion of some of its existing bases – from Djibouti in the Horn of Africa to Irbil in Iraqi Kurdistan – into “hubs”.

From sub-Saharan Africa to Southwest Asia, expect a hub boom, all of them merrily hosting Special Forces; the operation was described by Pentagon supremo Ash “Empire of Whining” Carter as “essential”; “Because we cannot predict the future, these regional nodes – from Moron, Spain to Jalalabad, Afghanistan – will provide forward presence to respond to a range of crises, terrorist and other kinds. These will enable unilateral crisis response, counter-terror operations, or strikes on high-value targets.”

It’s all here: unilateral Exceptionalistan in action against anyone who dares to defy imperial diktats.

From Ukraine to Syria, and all across MENA (Middle East and North Africa), the proxy war between Washington and Moscow, with higher and higher stakes, won’t abate. Imperial despair over the irreversible Chinese ascent also won’t abate. As the New Great Game picks up speed, and Russia supplies Eurasian powers Iran, China and India with missile defense systems beyond anything the West has, get used to the new normal; Cold War 2.0 between Washington and Beijing-Moscow.

I leave you with Joseph Conrad, writing in Heart of Darkness: “There is a taint of death, a flavor or mortality in lies….To tear treasure out of the bowels of the land was their desire, with no more moral purpose at the back of it than there is in burglars breaking into a safe….We could not understand because we were too far and could not remember, because we were traveling in the night of first ages, of those ages that are gone, leaving hardly a sign – and no memories…”

Un-PC and Fascinating You’re About To Get Monkey-Hammered