The War Against the Cowboys

The Oregon stand off and US imperialism

As our old republic fades into history, replaced by a voracious global Empire, the division between foreign policy and domestic policy is erased. A conquistador treats his helots on the home front with the same contempt he has for his subjects abroad. In both cases, conquest and subjugation is the goal – and rebellion is the inevitable result.

Just as the people of Iraq rose up and finally threw out the American occupiers, so the people in the American West are rising up against their federal overlords. This is the reason for the occupation of a federal facility in Burns, Oregon, where hundreds of protesters rallied against the jailing of ranchers Dwight Hammond and his son Steve.

The Hammond case has become a cause celebre West of the Mississippi, where federal control of huge swathes of real estate has become a life and death issue for ranchers and others who make their living off the land. As the feds encroach on their livelihood, they are pushing back, and nothing illustrates this better than the Hammond case.

In 2001, the Hammonds started a controlled burn on their own land to eliminate invasive junipers from ruining grazing for cattle: the fire spread to neighboring federal lands. As the Tri-State Livestock News reports:

“The first fire, in 2001, was a planned burn on Hammonds’ own property to reduce juniper trees that have become invasive in that part of the country. That fire burned outside the Hammonds’ private property line and took in 138 acres of unfenced BLM land before the Hammonds got it put out. No BLM firefighters were needed to help extinguish the fire and no fences were damaged.

“’They called and got permission to light the fire,’ Dwight’s wife, Susan, said, adding that was customary for ranchers conducting range management burns – a common practice in the area.

“’We usually called the interagency fire outfit – a main dispatch – to be sure someone wasn’t in the way or that weather wouldn’t be a problem.’ Susan said her son Steven was told that the BLM was conducting a burn of their own somewhere in the region the same day, and that they believed there would be no problem with the Hammonds going ahead with their planned fire. The court transcript includes a recording from that phone conversation.”

There was a second fire in 2006, started by Steven Hammond to counteract the lightning fires that threatened to envelope their land and their home. The Bureau of Land Management says that a single acre of federal land was affected by the fire –  and they pressed charges, even though lightning fires were raging all over the area and there was no way to determine which fires were burning what land.

The Hammonds were originally charged under the Antiterrorism and Effective Death Penalty Act of 1996 with nine counts – including starting several other fires — but the jury saw otherwise and acquitted them of all but two counts: starting the fires they admitted to in the first place. The judge sentenced them to less than the federal mandatory, stating that what the government was asking – five years – was “disproportionate” and if imposed would’ve “shocked my conscience.”

The government wasn’t satisfied with that, and they appealed the decision. Judge Ann Aiken – the same judge who ruled that the prison system has a right to keep its safety standards confidential, even though a prisoner had died under dicey circumstances – agreed with the Justice Department, and the Hammonds must now serve full five-year sentences, minus time already served. They have agreed to turn themselves in, in spite of the protests on their behalf.

What is clear is that the government is out to make an example of the Hammonds. Their case represents the resistance of rural ranchers and farmers to the aggressive tactics of the government and the radical “environmentalist” movement, which aim at eliminating the few private landowners remaining in the region. The Hammonds are the last holdouts in an area that has seen the Bureau of Land Management revoke permits, block water usage, and use every means to harass them and force them to move out. 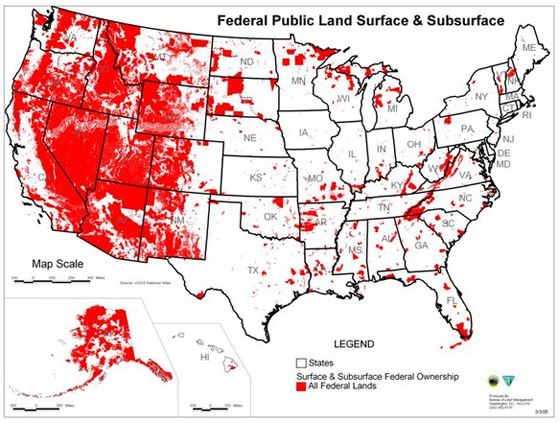 Take a look at this map showing the extent of federal control of Western lands. This maps the conquest of the region by faceless bureaucrats in Washington – in the same way that the post-9/11 rampage of US imperialism maps the conquest of the Middle East. And it’s the same gang at work. No wonder ranchers and their families and supporters are taking up arms against the federal government – this is no more surprising than the Iraqi resistance to the US army of occupation.