The holidays brought a slight twinkle of hope to the scourge that is America’s 100-year drug war. No, the ex-hippies, now that they’re in charge haven’t reverted back to their peace-loving consciousness-expanding selves. It’s a money issue. The ridiculously named Department of Justice can’t, for the time being, make payments under the “equitable-sharing” asset forfeiture program, due to budget cuts.

The war on drugs has turned into policing for profit by giving police the option of prosecuting asset forfeiture cases under federal instead of state law. “Federal forfeiture policies are more permissive than many state policies, allowing police to keep up to 80 percent of assets they seize — even if the people they took from are never charged with a crime,” the Washington Post reported a couple days before Christmas.

Of course, law enforcement was not happy with the suspension and fired off a letter to the President and his Attorney General, squealing, “This shortsighted decision by Congress will have a significant and immediate impact on the ability of law enforcement agencies throughout the nation to protect their communities and provide their citizens with the services they expect and deserve.” 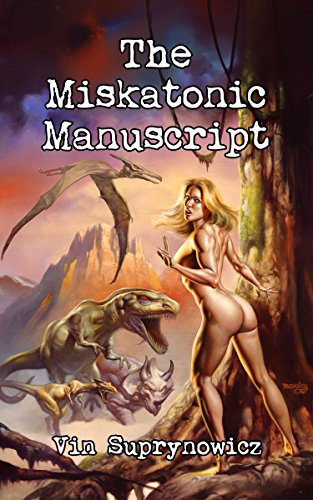 Protect communities and provide services? That service being the barring of individuals from controlling their own consciousnesses. It isn’t enough that we physically toil an ever greater part of each year for the state, but it demands our minds as well?  What if after decades of this persecution someone fought back? That’s the question Vin Suprynowicz explores in his latest novel The Miskatonic Manuscript, the second installment of the book sleuthing adventures of Matthew Hunter and his comely companion, the sharp-shooting and sharp-tongued Chantal Brothers.

For those who enjoyed The Testament of James,  Miskatonic starts in the same sleepy “Books on Benefit” Providence, Rhode Island bookstore. However, Suprynowicz kicks up the genre from mystery to science fiction leaving the store’s cats, Mr. Cuddles and Tabbyhunter, to mind the store while Chantel and Matthew fight for their lives in another dimension against flesh craving dinosaurs and giant spiders.

The author challenges readers to amp their imaginations up to his level: the drug war to dinosaurs and back, with a few naked warrior goddesses thrown in to keep all your senses stimulated. And if that’s not enough, Suprynowicz drops in a Murray Rothbard and Austrian Business Cycle mention.

All of this happens between just two covers, one of which, the front, was censored by one puritanical Miskatonic reviewer.

In Suprynowicz’s tale, Windsor Annesley, the leader of the Church of Cthulhu, is on trial for how he and his church use mind-enhancing plants and chemicals as sacraments. We’re not talking stale wafers and grape juice. The Cthulhu psychedelic sacraments take their followers places they never imagined and just happen to be classified as narcotics by the nation’s drug warriors.

We don’t hear much about turning on, tuning in, and dropping out these days. However, there was a time when acid was dropped by the rich and powerful. America had a chance to harness the power of mind-expanding drugs in the 60’s when a few wives on Capitol Hill were turning on with the idea an expanded mind is a peaceful one. In Mary’s Mosaic, Peter Janney tells the story of how John F. Kennedy paramour Mary Pinchot Meyer introduced JFK to LSD who wanted to explore the use of drugs for promoting world peace.

Of course these days continuous Drug War propaganda has the booboisie scared to death of psychedelics. For instance, this Graham Hancock Ted Talk was banned.  Suprynowicz offers a number of long quotes from Terence McKenna and others on the freedom of conscious, including this from Thomas Szasz’s The Second Sin, If you talk to god, “that’s prayer. If God talks to you, that’s schizophrenia.”

Upon sentencing, Reverend Annesley isn’t worried about rotting in jail, but instead is relishing the opportunity to start a revolution. And with the use of the mind-expanding sacraments and some electronic wizardry his followers push back with the only thing the state understands, violence. Suprynowicz knows his weaponry and describes what it can do with enthusiastic detail, whether the targets are Pterodactyls or arrogant judges and cops.

Hancock makes the point that we enjoy numerous freedoms denied our ancestors, making it “exceedingly strange that Western civilization in the twenty-first century enjoys no real freedom of consciousness.”

As he always does, Suprynowicz, in The Miskatonic Manuscript, takes the reader on a journey that challenges our sensibilities and forces us to think, and decide, are we willing to fight for total freedom?