When The End Of The Bubble Begins

They are going to layer their post-meeting statement with a steaming pile of if, ands & buts. It will exude an abundance of caution and a dearth of clarity.

Having judged that a 25 bps pinprick is warranted, the FOMC will then plant itself firmly in front of the great flickering dashboard in the Eccles Building. There it will repose to a regimen of “watchful waiting”, scouring the entrails of the “incoming data” to divine its next move.

Perhaps the waiting won’t be so watchful as all that, however. What is actually coming down the pike is something that may put the reader, at least those who have already been invited to join AARP, more in mind of that once a year hour-long special broadcast by Saturday morning TV back in the days of yesteryear; it explained how the Lone Ranger got his mask.

Memory fails, but either 12 or 19 Texas Rangers rode high in the saddle into a box canyon, confident they knew what was around the bend. Soon there was a lot of gunfire and then there was just one, and that was only because Tonto’s pony needed to stop for a drink.

Yellen and her posse better pray for a monetary Tonto because they are riding headlong into an ambush in the canyons of Wall Street. To wit, they cannot possibly raise money market interest rates—-even by 75 bps—-without massively draining liquidity from the casino.

Don’t they know what happened to the $3.5 trillion of central bank credit they have digitally printed since September 2008? Do they really think that fully $2.6 trillion of it just recycled right back to the New York Fed as excess bank reserves?

That is, no harm, no foul and no inflation? The monetary equivalent of a tree falling in an empty forest?

To the contrary, how about recognizing the letter “f” for fungibility. What all that “excess” is about is collateral, not idle money.

The $2.6 trillion needed an accounting domicile—so “excess reserves” was as good as any.  But from a financial point of view it amounted to a Big Fat Bid for existing inventories of stocks and bonds.

Stated more directly, Wall Street margined the Fed’s gift of collateral, and did so over and over in an endless chain of rehypothecation.

So that’s why December 16th will be the beginning of the end of the bubble. If the Fed were to actually raise money market rates the honest way, and in the manner employed by central banks for a century or two, it would have to drain cash from the system; and it would have to do so in the trillions in order to levitate the vast sea of money it has pinned to the zero bound.

Yet actually raising money market rates the honest way would amount to the opposite of what has gone before. That is, it would become the Big Fat Offer, triggering a selling stampede in the casino.

The front-running smart money of the bubble’s inflation phase would become a bow-wave of retreat; and the hypothecated chains of collateral would morph into a monetary black hole of margin calls and liquidations.

So the Keynesian monetary plumbers of the Eccles Building will try something truly stupid. That is, they will try to levitate the entire sea of money-like liabilities they have conjured over the last two decades, but especially since September 2008, mainly by paying higher rates of interest to banks on those $2.6 trillion of so-called excess reserves.

Well now. Will higher IOER (interest on excess reserves) cause money market funds to pay more to their long-suffering investors; or cause the repo rate on trillions of government and other fixed income securities to rise in sympathy; or lift the rate on short-term CP and the multiple other forms of wholesale money?

No it won’t. The Fed is fixing to call a rate rise but its preferred tool is powerless to make it happen. The so-called IOER scheme has always been a pointless crony capitalist sop to the Fed’s banking system constituency, anyway.

After all, we do not (yet) pay prisoners to stay in jail, but paying banks on idle reserves amounts to the same thing. Just where were they going?

The truth is, IOER payments were designed to compensate the banks for the regulatory cost of capital required to be set-aside against these assets under the new rules. So the banks got their capital costs subsidized and Wall Street got more fungible collateral in the bargain.

Yet wait until the cowboys on Capitol Hill figure this out. In not too many months down the road, the $100 billion per year of so-called “profit” which the Fed remits to the US Treasury will largely disappear, leaving one of many gapping holes in the Federal deficit that are lurking just around the corner.

That’s because even 100 basis points of IOER would cost upwards of $30 billion a year. On top of that there is also the mega-risk that prices of the $4.4 trillion of Treasury and GSE debt owned by the Fed will keep heading south, requiring it to carve out “reserves” from its earnings to offset the balance sheet losses.

The whole maneuver is a world class scam anyway, and indicative of the lunacy which passes for national policy. The Fed’s $98.7 billion of “profits” last year was generated by the $116 billion of interest paid to it by the US treasury and the GSE’s——less a goodly rake-off for system expenses and salaries and for funding contract research by say 85% of the monetary economists in the US who don’t already work for Wall Street. 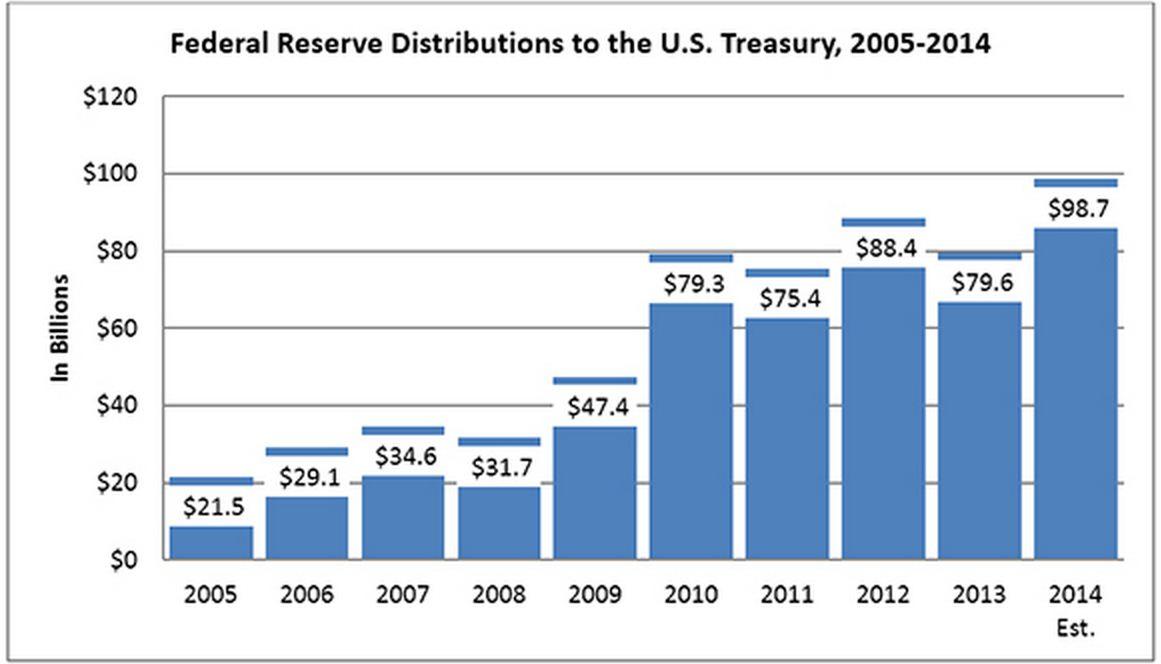 In any event, Congress will surely blow its top if the Fed uses up this $100 billion “deficit reducer” by paying IOER or other forms of bribes aimed at make pretend interest rate raising.

For instance, another so-called tool to effectuate rate normalization is the TDF or term deposit facility. Under that particular gem, banks may offer cash to the Fed for seven days in return for an interest rate that would presumably be above the money market rate or say 30 bps after Wednesday.

Now isn’t that brilliant! The regulated banks are drowning in excess liquidity—-so sopping up cash seven days at a time will not constrain their ability to lend in the slightest.

Nor would it elevate the money market rate of interest unless the Fed issues a humungous open-ended tender to the banking system to take any and all deposits offered. Exactly thereupon, however, the number of histrionics-filled hearings on Capitol Hill would be limited only be the number of TV crews available to cover them.

It would be perceived as, and in fact would be, a massive subsidy to the banking system. That is, a reward for not lending to main street America.

At the end of the day, the Fed will not be able to bribe the money market higher in a manner that is politically feasible. So it will be forced to repair to the old fashioned recipe——-draining cash from the Wall Street dealer markets.

Even on this matter, however, these Keynesian fools can’t manage to be honest about what they will be doing. They will offer up another tool called RRP or reverse repo; it will be described as an instrument to manage market liquidity in a manner consistent with its measured journey toward normalization.

Folks, RRP is nothing more than selling bonds with your fingers crossed.

Once they get started down this path in earnest, they will either keep rolling the RRPs, which is the same thing as selling down their $4.5 trillion inventory of treasury bonds and GSEs, or they will relent and admit the whole interest rate raising gambit had been a blithering failure.

When the US economy joins the worldwide slide into deflationary recession some time next year, this will all be academic anyway. But in the interim you haven’t seen nothing yet in terms of Fedspeak gibberish and cacophony.

Within no time the hapless 19 Federal Reserve Rangers will be debating about whether they have actually tightened in the first place; and whether any actual liquidity that they drain from Wall Street via TDF or RRP is meant to be permanent or just a short-term market “smoothing” maneuver.

This much can’t be gainsaid. The combination of encroaching recession and even moderate liquidity draining moves will be enough to trigger Wall Street fainting spells, like those of this past week, and with increasing amplitude and frequency.

The fact, that the junk bond market is already falling apart and CCC yields have soared back to 17% is not just due to an isolated bust in the shale patch; its a warning that the hunt for yield that massive central bank financial repression triggered in the financial markets is about ready to become a stampede for the exists.

So get ready for the monetary gong show which starts next week.

Today’s Commerce Department report on total business sales and inventories further confirmed that the inventory to sales ratio is now decidedly in the recession red zone. This means that the Fed’s liquidity draining moves will join hands with rising risks of recession.

Can the third great bubble of this century survive a Fed that finally wants to get off the zero bound after its way too late, but can’t do it anyway without a massive crash inducing cash drain from Wall Street? And in the teeth of the next recession to boot?

Yes, the end of the bubble does begin on December 16th.

Previous article by David Stockman: A Riot Is Coming

Against EqualityRescuers or Death Squad?