“Statin Nation II: What Really Causes Heart Disease?” is the sequel to the documentary “Statin Nation: The Great Cholesterol Cover-up.” However, it stands well on its own, even if you didn’t see the original film.

For many decades, the idea that saturated fats caused heart disease reigned supreme, and diets shifted sharply away from saturated animal fats such as butter and lard, toward partially hydrogenated vegetable oils and margarine.

However, as people abandoned saturated fats and replaced them with trans fats, rates of heart disease continued on a steady upward climb. And, the more aggressive the recommendations for low-fat diets, the worse this trend became.

Last year, butter consumption in the US reached a 40-year peak, and the resurgence of butter has been attributed to a shift in consumer preferences away from processed foods and back toward natural foods.

This is a positive trend, showing that the old myth claiming that saturated fat is bad for you is finally starting to crumble. People are also starting to recognize that refined sugar is far worse for your heart than dietary fat was, and processed low-fat foods are typically loaded with sugar.

According to the film, the long held view that saturated fats and cholesterol caused heart disease came under closer scrutiny in the 1990s, when researchers like Kurt Ellison with the Boston University started taking notice of what became known as the French Paradox.

The French eat a lot more fat than many other nations, yet they don’t have higher rates of heart disease.

Icelanders also consume higher amounts of saturated fat — on average 14.6 percent, but their rate of heart disease deaths is also lower than the UK, just 34 per 100,000.

The film reviews a number of statistics from other countries, including Denmark, Lithuania, and Portugal, which defy the idea that saturated fat consumption is associated with heart disease. The data simply doesn’t bear this out.

Here’s another startling example. The American Heart Association recommends keeping your saturated fat consumption below seven percent of your total calories, ideally around 5 or 6 percent.

Lithuania is very close to being on target, with a saturated fat consumption rate of 7.7 percent of total calories, yet Lithuania has one of the highest heart disease mortality rates in the world — 122 per 100,000.

Cholesterol Is Not a Major Factor in Heart Disease

Like saturated fat, cholesterol has also been wrongly demonized despite the fact that 60 years’ worth of research has utterly failed to demonstrate any correlation between high cholesterol and heart disease.

Fortunately, limitations for cholesterol will likely be removed from the 2015 edition of Dietary Guidelines for Americans, which would be a welcomed change.

Cholesterol is actually one of the most important molecules in your body; indispensable for the building of cells and for producing stress and sex hormones, as well as vitamin D.

It’s also important for brain health, and helps with the formation of your memories. Low levels of HDL cholesterol have been linked to memory loss and Alzheimer’s disease, and may also increase your risk of depression, stroke, violent behavior, and suicide.

What You Need to Understand About HDL and LDL Cholesterol

While cholesterol is typically divided into HDL/”good” and LDL/”bad” cholesterol,” there’s really only one kind of cholesterol. The division into HDL and LDL is based on how the cholesterol combines with protein particles.

LDL and HDL are lipoproteins, meaning fats combined with proteins. Cholesterol is fat-soluble, and blood is mostly water, so for it to be transported in your blood, cholesterol needs to be carried by a lipoprotein, which is classified by density.

Large LDL particles are not harmful. Only small dense LDL particles can potentially be a problem, as they can squeeze through the lining of your arteries. If they oxidize, they can cause damage and inflammation.

Thus, it would be more accurate to say that there are “good” and “bad” lipoproteins (opposed to good and bad cholesterol). Dr. Stephen Sinatra, a board certified cardiologist, and Chris Kresser, L.Ac., an integrative medicine clinician, have both addressed this issue in previous interviews.

Some groups, such as the National Lipid Association, are now starting to shift the focus toward LDL particle number instead of total and LDL cholesterol, in order to better assess your heart disease risk. But this approach has not yet spread into the mainstream.

Statins Are Prescribed Based on an Incorrect Hypothesis

Since the cholesterol hypothesis is false, this also means that the recommended therapies — low-fat, low-cholesterol diet, and cholesterol lowering medications — are doing more harm than good. Statin treatment, for example, is largely harmful, costly, and has transformed millions of people into patients whose health is being adversely impacted by the drug. As previously noted by Dr. Frank Lipman:1

“[T]he medical profession is obsessed with lowering your cholesterol because of misguided theories about cholesterol and heart disease. Why would we want to lower it when the research2 actually shows that three-quarters of people having a first heart attack, have normal cholesterol levels, and when data over 30 years from the well-known Framingham Heart Study3 showed that in most age groups, high cholesterol wasn’t associated with more deaths?

In fact, for older people, deaths were more common with low cholesterol. The research is clear – statins are being prescribed based on an incorrect hypothesis, and they are not harmless.”

Statins Can Wreck Your Health in a Number of Ways

The film points out that research shows statins promote calcification of your arteries, and even though arterial calcificationincreases heart disease, these studies seem to be largely ignored by mainstream health professionals. Sherif Sultan, a professor of Vascular and Endovascular surgery who is featured in the film, notes that many people have in fact improved their health by getting off statins.

That certainly doesn’t surprise me, considering the fact that studies have discovered a wide variety of problems associated with statin use, and virtually all of these problems are being downplayed or ignored altogether by conventional medicine.

Odds are actually very high — greater than 100 to one — that if you’re currently taking a statin, you probably don’t need it. Based on my own review of the evidence, the ONLY subgroup that might benefit from statins are those born with a genetic defect called familial hypercholesterolemia. Dr. Sinatra believes males with obstructions in their left anterior descending coronary artery might also benefit. For all others, statins are more likely to do you harm than good.

For example, research shows that statins: 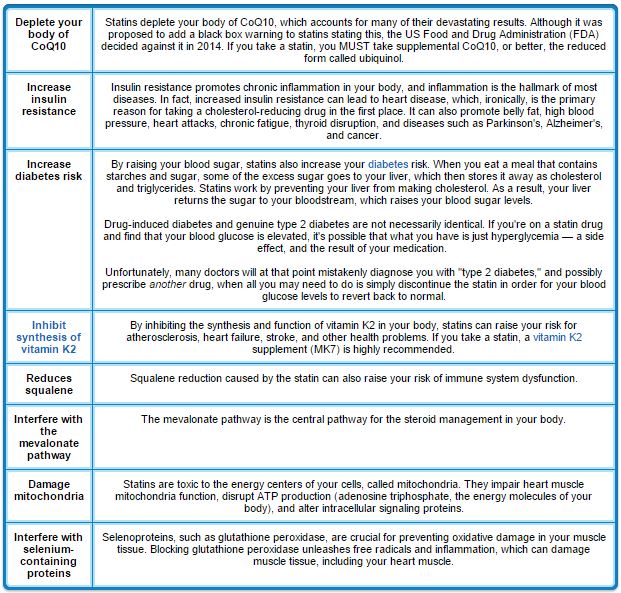 Statins really have nothing to do with reducing your heart disease risk. In fact, this class of drugs can actually increase your risk for heart problems — especially if you do not take ubiquinol (CoQ10) along with it to mitigate the depletion of CoQ10 caused by the drug. Taking extra vitamin K2 is also advisable.

Statins decrease CoQ10 for the identical reason they lower cholesterol, they impair the pathway your liver uses to make both of them. I believe this is probably its greatest toxicity as CoQ10 is absolutely essential for mitochondrial health. My new passion is understanding this at a fine molecular level as I’m convinced it is the core for the treatment and prevention of most cancers and the slowing down of the aging process. So if you are concerned about these issues, then I couldn’t warn you more strongly to avoid statins.

Knowing that saturated fat and cholesterol have nothing to do with heart disease finally frees you to take a serious look at what does cause this potentially lethal condition. While the film focuses on how things such as cortisol, stress, and telomeres can influence heart disease, for most people heart disease is a result of poor lifestyle choices; some of the most important of which include the following. All of these things are well within your control, and don’t cost much (if any) money to address. 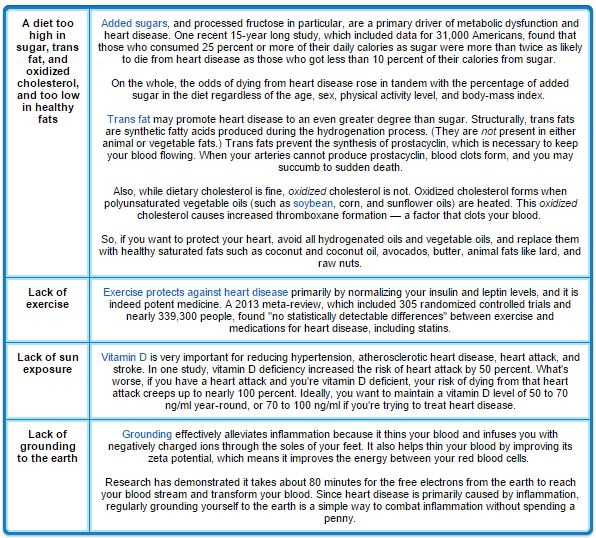 If you want to understand what causes heart disease, you have to look at what causes damage to your artery walls, interferes in disease processes, and causes blood clotting. When the endothelial wall is damaged, repair mechanisms are set into motion, creating a “scab.” To prevent this scab from dislodging, the endothelial wall grows over it, causing the area to become thickened. This is what is called atherosclerosis.

There’s no fat (cholesterol) “clogging the pipe” at all; rather the arterial wall is thickened as a result of your body’s natural repair process. So what causes damage to your arteries?

One of the primary culprits is sugar and fructose in particular. So eating a high sugar diet is a sure-fire way to put heart disease on your list of potential health problems. Meanwhile, total cholesterol will tell you virtually nothing about your disease risk, unless it’s exceptionally elevated (above 330 or so, which would be suggestive of familial hypercholesterolemia, which, in my view, would be about the only time a cholesterol-reducing drug would be appropriate).

Two ratios that are far better indicators of heart disease risk are:

The Father of Modern SurgeryWhat To Be Thankful for