Ron Paul vs. The Lincoln Cult

On October 10 the online History News Network expressed its disapproval (yet again) of a statement that Ron Paul made several years ago regarding the American “Civil War.”  In a television interview Ron Paul expressed disagreement with the new, politically-correct legend that slavery was the one and only cause of the Civil War.  The long-simmering conflict over states’ rights versus consolidation and nationalism was the main problem, he said.  So the History News Network highlighted an article by one Dale Schlundt, an adjunct professor at Northwest Vista College, on “Why People Like Ron Paul Falsely Believe Slavery Wasn’t the Cause of the Civil War.”  Schlundt is very upset that someone with such a large audience and who allegedly “did not study the Civil War in depth” would say such a thing.  He says that he starts each semester of his history class with a video of Ron Paul’s television interview on the subject, and then spends considerable class time belly-aching about it.

Of course, the reason why “people like Ron Paul” believe that there were multiple causes of the “Civil War,” as with all other wars in human history, is that they have studied the subject in depth, unlike Dale Schlundt, and do not rely simply on the latest politically-correct platitudes.  For example, they are familiar with the book, The Causes of the Civil War by Kenneth Stampp, a former president of the American Historical Association. This widely-used 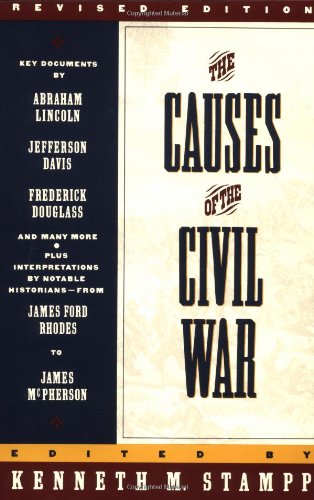 university-level textbook discusses dozens of causes of the war, which is why the title of the book includes the word “Causes,” not “Cause.”  Dale Schlundt is apparently oblivious to this scholarship.

“People like Ron Paul” are also aware of the fact Abraham Lincoln and the U.S. Congress very clearly stated that ending slavery was not the purpose of the war.  The U.S. Congress, which was almost totally comprised of Northerners in July of 1861, issued its “War Aims Resolution” that stated:

That this war is not waged upon our part in any spirit of oppression, nor for any purpose of conquest or subjugation, nor for the purpose of overthrowing or interfering with the rights or institutions of the States [meaning slavery], but to defend and maintain the supremacy of the Constitution and to preserve the Union.

In his first inaugural address Lincoln assured the world that “I have no purpose, directly or indirectly, to interfere with the institution of slavery in the States where it exists.  I believe I have no lawful right to do so, and I have no inclination to do so.”  He then quoted the Republican Party Platform of 1860, which also pledged the Party’s everlasting support of Southern slavery:  “Resolved, That the maintenance inviolate of the rights of the States, and especially the right of each State to order and control its own domestic institutions [i.e., slavery] according to its own judgment exclusively, is essential to that balance of power on which the perfection and endurance of our political fabric depend . . .”  Dale Schlundt is also apparently oblivious to the words of Lincoln’s first inaugural address, unlike “people like Ron Paul.”

Also in his first inaugural address, near the end, Lincoln expressed the strongest support for the Corwin Amendment to the Constitution, which had just passed the Northern-controlled House and Senate, which stated that “No Amendment shall be made to the Constitution which will authorize or give to Congress the power to abolish or interfere, within any State, with the domestic institutions thereof [i.e., slavery], including that of persons held to labor or service [i.e., slaves] by the laws of said State.”  Ohio, Maryland, and Illinois ratified the Corwin Amendment before the war broke out.

In the same speech in which Lincoln advocated the enshrinement of slavery explicitly in the Constitution, he threatened “invasion” and “bloodshed” (his exact words) in any state that refused to collect the new Morrill Tariff, which more than doubled the rate of federal taxation just two days earlier in legislation signed by President James Buchanan.  “There will be no invasion of any state,” he said, as long as they pay up.  They did not, so Lincoln did what he threatened to do and waged total war on his own country over tax collection.

In his article Schlundt does not say that Lincoln waged war on his own citizens to free the slaves; he says that the sole cause of the war was the dispute over the extension of slavery into the new territories.  Lincoln and the Republican Party were indeed opposed to that, citing two reasons:  1) They wanted to preserve the territories as the exclusive domain of “free white labor” to use Lincoln’s exact words; and 2) to reduce the congressional representation of the Democratic Party, since at that time every five slaves counted as three persons in the census for the purpose of determining how many congressional representatives each state would have.  Even so, the salient point here is that by seceding from the union the Southern states abandoned any possibility of bringing slaves into the territories of the now-foreign government of the United States.  So Dale Schlundt’s slavery-as-the-sole-cause-of-the-Civil-War theory comes down to this:  The South wanted to bring slaves into the new territories, so their strategy to achieve that goal was to secede, after which it would have been impossible to bring slaves into the U.S. government’s territories.  This, he says, is what should be taught to college students about the war, not the words and actions of Lincoln and the rest of the U.S. government at the time.

“People like Ron Paul” also know that, early in the war, when two of Lincoln’s military commanders unilaterally issued local emancipation proclamations Lincoln rescinded them and reprimanded the commanders.  They know that the Emancipation Proclamation only applied to “rebel territory,” where the U.S. government had no ability whatsoever to free anyone, while explicitly exempting parts of the South such as much of Louisiana, where the U.S. Army was in control.  The slave states of Maryland, Delaware, Kentucky, and West Virginia, all a part of the Northern Union, were also exempted.

“People like Ron Paul” also know that Lincoln called the Emancipation Proclamation a “war measure” that he hoped would lead to slave insurrections, although it did not, and that it would have become void had the war ended at

that time.  People like Dale Schlundt, on the other hand, are either ignorant of these plain historical facts, or they dishonestly hide them from their students.

“People like Ron Paul” also understand that secession does not necessitate war.  The issue of why the Southern states seceded is entirely separate from the question of why there was a war.  Lincoln himself was very clear on why there was a war:  By his actions he proved that his war aim was to destroy the voluntary union of the founding fathers and replace it with a coerced, Soviet-style union held together by mass murder, mayhem, the bombing and burning of entire cities, the rape, pillage, and plunder of the civilian population, and everlasting threats of doing the same should any state in the future contemplate leaving Lincoln’s “mystical” union.

When people like Ron Paul cite the decades-long conflict over states’ rights versus nationalism as a cause of the war, they are saying that the Southern states, like the New England Federalists before them, believed that the union was voluntary and that they had a right of freedom of association and of secession.  The Republican Party, on the other hand, insisted that the union was never voluntary, and was a one-way venus flytrap from which no state, and no citizen, could ever escape for any reason. Lincoln’s regime “proved” its theory of the union to be “correct” at the cost of as many as 850,000 dead Americans according to the latest research.

Previous article by Thomas DiLorenzo: The Infantilization of College Students