The Prison State Of America: More Jails Than Colleges

As we recently noted, The Prison State of America is alive and well as our prison-industrial complex, which holds 2.3 million prisoners, or 25 percent of the world’s prison population, makes money by keeping prisons full. While the statistics are mind-boggling, we thought it particularly ironic that on the day when President Obama officially launched his “free community-college for all” plan, that we point out there are more jails than colleges in America… and here’s where they live…

It’s often been remarked that our national incarceration rate of 707 adults per every 100,000 residents is the highest in the world, by a huge margin.

We tend to focus less on where we’re putting all those people. But the 2010 Census tallied the location of every adult and juvenile prisoner in the United States. If we were to put them all on a map, this is what they would look like:

To put these figures in context, we have slightly more jails and prisons in the U.S. — 5,000 plus — than we do degree-granting colleges and universities. In many parts of America, particularly the South, there are more people living in prisons than on college campuses. 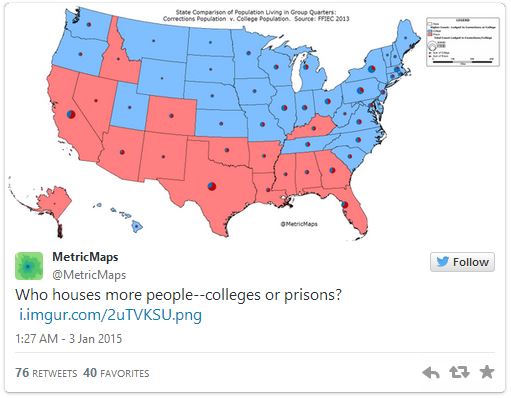 As you can see in the map, states differ in the extent to which they spread their correctional populations out geographically. Florida, Arizona and California stand out as states with sizeable corrections populations in just about every county.

The rise of what Marie Gottschalk, the author of “Caught: The Prison State and the Lockdown of American Politics,” calls “the carceral state” is ominous. It will not be reformed through elections or by appealing to political elites or the courts. Prisons are not, finally, about race, although poor people of color suffer the most. They are not even about being poor. They are prototypes for the future. They are emblematic of the disempowerment and exploitation that corporations seek to inflict on all workers. If corporate power continues to disembowel the country, if it is not impeded by mass protests and revolt, life outside prison will soon resemble life in prison.

The Empire Is Hated All Around the World10 Classic Books