Why They Raped, Pillaged, and Plundered: General Sherman’s Professed Hatred of Self Government

November and December of this year mark the 150th anniversary of General William Tecumseh Sherman’s famous “march to the sea” at the end of the War to Prevent Southern Independence.  The Lincoln cult – especially its hyper-warmongering neocon branch – has been holding conferences, celebrations, and commemorations while continuing to rewrite history to suit its statist biases.  Business as usual, in other words.  But they are not the only ones writing about the event.  Historian Karen Stokes has published South Carolina Civilians in Sherman’s Path: Stories of Courage Amid Civil War Destruction that contains a great deal of very telling information about Sherman’s motivation in waging total war on the civilian population of South Carolina.

Stokes begins by quoting a letter that Sherman wrote to General Henry Halleck shortly before invading all-but-defenseless South Carolina:  “[T]he whole army is burning with an insatiable desire to wreak vengeance upon South Carolina.”  In another message a few weeks later, Sherman reiterated to Halleck that “The whole army is crazy to be turned loose in [South] Carolina.” 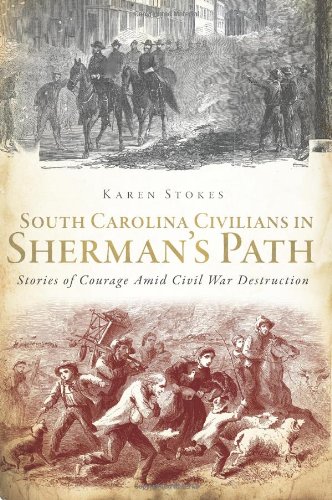 A New York newspaperman who was “embedded” with Sherman’s army (to use a contemporary term) wrote that “There can be no denial of the assertion that the feeling among the troops was one of extreme bitterness towards the people of the State of South Carolina.”  The Philadelphia Inquirer cheered on as Sherman’s army raped, pillaged, burned, and plundered through the state, calling South Carolina “that accursed hotbed of treason.”

In a January 31, 1864 letter to Major R.M. Sawyer, Sherman explained the reason why he hated the South in general, and South Carolina in particular, so much.  The war, he said “was the result of a false political doctrine that any and every people have a right to self-government.”  In the same letter Sherman referred to states’ rights, freedom of conscience, and freedom of the press as “trash” that had “deluded the Southern people into war.”

Sherman’s subordinates expressed similar opinions.  In 1865 Major George W. Nichols published a book about his exploits during Sherman’s “march” in which he describing South Carolinians as “the scum, the lower dregs of civilization” who are “not Americans; they are merely South Carolinians.”  General Carl Schurz is quoted by Stokes as remarking that “South Carolina – the state which was looked upon by the Northern soldier as the principal instigator” of the war was “deserving of special punishment.”

All of this is so telling because it reveals that neither Sherman, nor his subordinate officers, nor the average “soldier” in his army, were motivated by anything having to do with slavery.  South Carolina suffered more than any other state at the hands of Sherman’s raping, looting, plundering, murdering, and house-burning army because that is where the secession movement started.  It was NOT because there were more slaves there than in other states, or because of anything else related to slavery.  It was because South Carolinians, even more than other Southerners, did not believe in uncompromising obedience to the central state.

Shortly after the war ended some prominent Northerners began to pour into South Carolina to revel in the scenes of destruction (and to steal whatever they could).  The goofy Brooklyn, New York, Reverend Henry Ward Beecher went on one such excursion and gave a speech while standing under a giant U.S. flag in Charleston in which he declared:

“Let no man misread the meaning of this unfolding flag!  It says, ‘GOVERNMENT hath returned hither.’  It proclaims in the name of vindicated government, peace and protection to loyalty; humiliations and pains to traitors.

This is the flag of sovereignty.  The nation, not the States, is sovereign.  Restored to authority, this flag commands, not supplicates . . . .  There may be pardon [for former Confederates], but no concession . . . .  The only condition of submission is to submit!”

In other words, the purpose of the war was to “prove” once and for all the false nationalist theory that the states were never sovereign; they did not ratify the Constitution, as explained in Article 7; the constitution created them; that the states never delegated certain powers to the central government in the Constitution (Article 1, Section 8); and that the central government is to have unlimited “supremacy” over all individuals and institutions.

This was the nationalist superstition about the American founding, first fabricated by Alexander Hamilton and repeated by successive generations of nationalist/consolodationist/mercantilist despots such as John Marshall, Joseph Story, Daniel Webster, and Abraham Lincoln.

This is why Sherman and his army reveled so much in their brutalization of defenseless South Carolinian women and children and the looting and destruction of their property.  And they bragged about it for the rest of their lives.  Much of the boasting is catalogued in South Carolina Civilians in Sherman’s Path. Stokes quotes a General Charles Van Wyck as writing that “nearly every house on our line of march has been destroyed.”  An “embedded” New York reporter named David P. Conyngham is quoted as described one South Carolina town after observing “the smoking ruins of the town, to tall, black chimneys looking down upon it like funeral mutes” with “old women and children, hopeless, helpless, almost frenzied, wandering amidst the desolation.” The book contains dozens of other eye-witness accounts by Union Army soldiers and Southern civilians of the burning down of entire cities and towns, rape, robbery, and wanton destruction of all varieties of private property, all of it occurring after the Confederate Army had vacated.  All to prove once and for all, to South Carolinians and all other Americans, North and South, that federalism and self-government was a “delusion,” to quote General Sherman himself.