The disgusting poll of the week by the Washington Post shows From moderate Democrats to White Evangelicals, Nearly Every Demographic Group Believes Torture Can Be Justified.

The Post says “nearly” but they are being generous. Close scrutiny shows “every” group supports torture.

Here’s the question at hand: “Looking ahead, do you feel that torture of suspected terrorists can often be justified, sometimes justified, rarely justified, or never justified.” 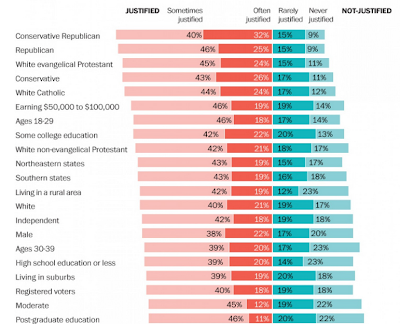 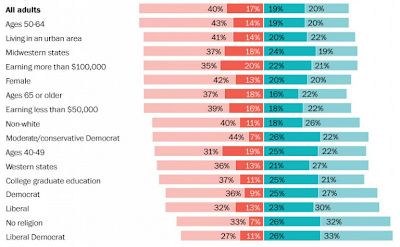 There is not a single group in any age, in any race, in any party, or in any religious affiliation where a majority says torture is always wrong.

Only by adding “rarely justified” to “never justified” can one find any majority disapprovals.

In that combined group, only the Democrats, Liberals, No Religion, and Liberal Democrats take a generally opposing stance.

Torture Approved at Every Level

It’s no wonder the CIA tortures. They have support at every level.

No one objects until it’s done to them or their families. But then it’s too late. When it happens to them no one will care.

Torture in the Name of Jesus

Do it in the name of Jesus, you can justify it in the end. Of course ISIS feels exactly the same way.

Link if video does not play: “Do it in the Name of Jesus“

I am thoroughly sickened by these results, but I have an explanation: People have been totally brainwashed by fearmongering and phony “time bomb analogies” they believe torture will produce results.

The fact of the matter is torture never has and never will produce the desired results.

Torture is 100% without a doubt counterproductive. It never works and is never justified. I can prove it, and will do so later today.

I am proud to take a moral stand on this issue while Evangelical Protestants, and “alleged” Conservatives lead the way in moral corruption.

Previous article by Michael Shedlock: A Small Price To Pay?

The Christmas Truce of 1914 Who’s the Central Banker of the Year?