George Orwell, novelist, essayist, journalist and critic, was born 111 years ago on June 25th. His novel 1984, a disturbing reminder of the dangers of excessive state power, remains gripping and popular, as does his allegorical novella Animal Farm, a creative and devastating critique of Stalinism.

Before long, however, Orwell’s fiction may cease to shock as surveillance states across the globe turn his dystopian Oceania and nightmarish Big Brother into horrible realities.

For starters, the federal government has been stockpiling weapons and ammunitions to control the market in these products so that ordinary citizens will be unable to arm themselves or defend their homes and families from invasion or worse. The FBI has subjected gun-sellers to heightened scrutiny by sending its agents into gun shops to interrogate employees about the behavior of purchasers—for instance, whether particular purchasers complained about the size of the American government while they were in the shop.

Meanwhile, the Federal Deposit Insurance Corporation, an agency established by Congress, has been pressuring banks and financial institutions to dissolve their relations with gun retailers regardless of whether those retailers maintained good credit and legitimate licensing.

Not to be outdone, the Department of Justice has cooked up “Operation Choke Point,” a program allegedly designed to target risky businesses involving pornography, online gambling, and drug paraphernalia, but which the DOJ has treated as a pretext for shutting down firearms companies by regulating how banks deal with the entire firearms industry.

The U.S. Bureau of Land Management (BLM) recently organized an armed standoff against cattle ranchers in Nevada over disputed cattle grazing rights. BLM agents trained sniper rifles on the citizen ranchers. In response, members of the Oklahoma militia readied themselves to join the Nevada ranchers and to take arms against the federal government. The armed BLM threat led former congressman Ron Paul to suggest that “a government that continually violates our rights of property and contract can fairly be described as authoritarian.”

Paul himself has been targeted by the federal government. The politicized Internal Revenue Service has fined him and his nonprofit Campaign for Liberty for failing to turn over their donor list to the agency. The IRS continues to demand the list. This same IRS has audited at least 10% of tea party donors. The percentage is probably higher, but we cannot know for sure because certain donor lists have been destroyed.

By 2015, the Federal Bureau of Investigation will have stored facial recognition data, fingerprints, retina scans, and palm prints for a third of all Americans, not just for criminals.

The Federal Housing Finance Agency and the Consumer Financial Protection Bureau plan to require 227 million Americans to disclose sensitive financial information such as mortgage and credit card data as well as social security numbers for a national database to be maintained and monitored by corporations. Federal lawmakers have also proposed a national database to track school and health records for college students—purportedly to understand the effects of socioeconomic background on student performance in higher education.

Since a 2009 Department of Homeland Security (DHS) intelligence report labeled military veterans as likely domestic terrorists, police departments in major cities have begun to militarize their operations to combat the perceived threat, according to one Indiana Police Sergeant. Other homegrown terror threats according to DHS include libertarians, Christians, and those who proclaim a favorable view of the American founders.

The DHS labels as “extreme right wing” anyone who is “suspicious of centralized federal authority” and “reverent of individual liberty.” It is as if the State is turning American signifiers on their head by reversing their import and association. The liberal model of freedom and liberty has become the model of right-wing extremism. Deconstructionists refer to such reversals as “flipping the binaries,” a semantic tactic whereby a privileged term becomes devalued in favor of its opposite.

The case of the DHS is particularly insidious as young men and women are shipped off to fight the State’s wars only to return home disgraced and distrusted. The State turns these young men and women into trained killers and then, having finished with them, releases them back into civilian life, but not before stigmatizing them with harmful DHS labels. Veterans are not likely to take comfort in the fact that the military now engineers brain chips to treat post-traumatic stress disorder.

Lawmakers and policy wonks have called for more federal government entanglement with the banking industry under the ruse of “regulation.” Despite continued public outcry about the federal government’s subsidizing of failing and failed companies, including and especially banks, people seem to believe that more regulations will reverse the traditional blurring of the lines between regulators and bankers.

The predictable result of increased government regulation in banking will be more federal participation in allegedly private activity and perhaps future bailouts, handouts, and privileges for those companies most willing to share employees with the federal government and to pander to politicians and bureaucrats. More regulations will ensure job security and higher salaries for the federal regulators themselves, who earn more each year than the bank executives. Even the secretaries of the regulators at the Office of the Comptroller of the Currency earn on average $79,182 annually. 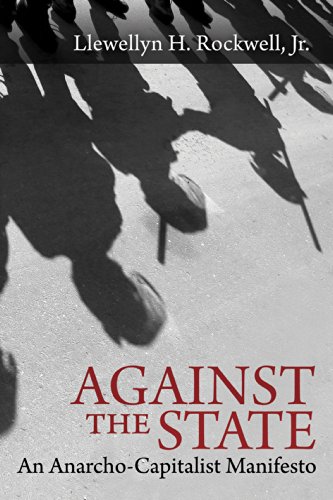 Against the State: An ... Llewellyn Rockwell Check Amazon for Pricing.

Chancellor Angela Merkel of Germany and President Dilma Rousseff of Brazil. The NSA breached the private servers of companies and executed a massive malware infective program while gathering millions of text messages and call records for internal review.

If all this weren’t frightening enough, the NSA has been intercepting images of people to harvest on a database that uses facial recognition technologies.

Thanks to you, Mr. Orwell, there are still many Americans who grow suspicious when totalitarianism creeps up on us slowly and by gradual degrees. Happy birthday. You weren’t a model capitalist, but it’s largely because of you and your cautionary stories that we aren’t in worse shape.

The Best of Allen Mendenhall

Allen Mendenhall is associate dean at Faulkner University Thomas Goode Jones School of law and executive director of the Blackstone & Burke Center for Law & Liberty. Visit his website at AllenMendenhall.com.