The Federal Rules of Criminal Procedure: One of the Most Evil Books in Print

I recently obtained the latest edition of West's Criminal Code and Rules, the book containing the rules you need to know if you are ever accused of a federal criminal offense. The book is updated every year, and each new edition supersedes the prior edition. It gets worse every year.

The West's edition now runs to more than 1600 pages, with abridgments and supplements. In addition to the Rules of Criminal Procedure, the book contains selected federal criminal statutes, the Federal Rules of Evidence, the Federal Rules of Appellate Procedure, and the Rules of the Supreme Court of the United States. On virtually every page are mechanisms to hurt, humiliate, control and enslave people to the government's will — all presented within a framework of procedural rules. 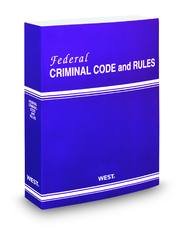 In theory, these rules provide an accused with avenues to defend himself. But one can judge a scheme of procedural rules by its fruits, and the codification, growth and expansion of the Federal Rules of Procedure (of which most state procedural codes are virtual copies), have produced the world's highest incarceration rate — and probably the highest incarceration rate ever registered in any society in human history. Even more significantly, the Federal Criminal Code and its procedural rules and guidelines have almost eliminated criminal trials in many jurisdictions, because most defendants are unable to defend themselves effectively under the rules and simply plead guilty. Such is the lopsided nature of the Federal Rules that they produce untold mountains of printed accusations and claims against individual Americans, while facilitating no more than a few sentences (generally at sentencing hearings) in rebuttal in most cases.

Footnotes are found on virtually every page of the Federal Rules, tracing dates of amendments and the steady progression of punishments over time. In general, Congress has ratcheted up sentences, expanded the limitation periods in statutes of limitations, expanded rewards for those who cooperate with the government, and limited or eliminated avenues for people to challenge government accusations and court judgments. One is hard pressed to find crimes described in the book as misdemeanors, even if they were misdemeanors long ago. Today, most federal crimes are felonies, and conviction brings more or less automatic prison time.

Altering or removing motor vehicle identification numbers? Up to 5 years in Federal prison. Using the telephone to incite or to "organize, promote," or even encourage a riot? Up to 5 years. Attempting to coerce any federal employee into "any political activity"? Up to 3 years. Removing or affixing a U.S. Customs seal on any merchandise without government permission? Up to 10 years in prison. Transporting "terrorists" on your boat? Up to life in prison. Engaging in "street gang" activity? An additional 10 years may be added to your sentence. Knowingly using a misleading domain name on the Internet in order to attract viewers to online porn? Up to two years in prison. Sending a letter in the mail urging insurrection? Up to 10 years. Trading with known pirates on the high seas? Up to 3 years.

The book seems to provide dozens of separate laws exposing unwary Americans to federal prison for simply filling out paperwork wrong. (Note that these provisions are almost never applied to people in government, who regularly fill out paperwork incorrectly.) There are provisions subjecting Americans to life in prison for cocaine possession. There are open-ended provisions which may (or may not) criminalize pouring a cup of coffee on the ground (and thus violating the Clean Water Act) or accidentally catching certain breeds of fish from the oceans. It remains only for a savvy prosecutor to fill in the blanks and add to the list of crimes that Congress may (or may not) have created.

Few people are aware that the Federal Rules (not just of criminal procedure but of civil procedure, appellate procedure, bankruptcy procedure and Supreme Court procedure) are riddled with provisions that grant more time to the government to file and respond to pleadings and briefs, greater privileges of appearance, and greater ease of prosecuting and defending litigation than individuals in the private sector. The governing advisory committees that produce these rules of procedure have offered no explanation for these filing requirement disparities.

There are also provisions of the Rules that grant the government greater privileges with regard to the filing of amicus curiae briefs in support of government positions:

When compounded over time and federal jurisdictions since the 1930s (when the feds began codifying rules of court procedure), these differing deadlines for drafting briefs and pleadings have translated into millions of hours of extra time for Justice Department lawyers to research and prepare litigation documents. The disparities have almost certainly contributed to profound inequalities exhibited between Americans of different social, income and political strata in the past several decades.

FILING FEES: $350 FOR NON-GOVERNMENT PARTIES, FREE FOR THE GOVERNMENT

Americans seeking to access the federal courts independently will find that the filing fees are substantial. It now costs $350 to file a petition or a lawsuit in federal court. That is, unless you are a government lawyer, and then there are no filing fees whatsoever. Filing an appeal? Another $450 for parties in the private sector. Again, free for the government. In recent years there have been repeated arguments that certain politically marginalized individuals (incarcerated prisoners, for example) file too many "frivolous" lawsuits. Congress responded by drastically limiting the rights of such people to file suits in federal court. Not so for the greatest single source of truly frivolous cases — the U.S. Justice Department — whose access to the courts remains limitless. This entity alone is responsible for thousands of false accusations against innocent Americans, many of whom have languished in prisons over the decades.

When neoconservatives gripe that federal courts coddle defendants (or would coddle "terrorists"), they are depicting a fictional court system that exists only in their imaginations. In practice, the federal courts overwhelmingly favor the government, and the rules of procedure are loaded with tricks and traps for the poor and the unwary. Anyone who faces the federal government in court knows that these "protections" are elusive, far-fetched, and in some cases illusionary.

Most so-called defense lawyers shiver in fear at the thought of trying to actually "defend" a client from a federal prosecution. Most begin their "defense" by seeking a plea bargain. Here is an interesting article describing the exodus of criminal defense lawyers from the field due to the increasingly lopsided rules of procedure. Criminal defense is not only unrewarding financially; it can be downright dangerous. Many of the most high profile defense lawyers of the past century — including Clarence Darrow, William Kunstler, F. Lee Bailey, Bruce Cutler, Lynne Stewart, Geoffrey Fieger (and doubtless many others) — have been subjected to criminal prosecution themselves after defending clients too zealously.

A recurring trick in federal court occurs when "defense" lawyers convince their clients to plead guilty to what a defendant believes is a minor count of a large indictment, in exchange for the government dropping other counts. After the guilty plea, a sentencing investigation is conducted by the U.S. Probation office (which is theoretically neutral but which in practice works closely with the prosecution). The Probation Office's "presentence investigation report" invariably recommends a sentence consistent with conviction on all the counts that were "dropped" by the government in the plea deal, and the defendant is then sentenced according to the worst allegations of the prosecution (without any ability to challenge such allegations at a trial). The lawbooks are literally filled with appeals of such sentences. I have read many dozens of these cases. There are probably hundreds. Here is a thoughtful dissent by a federal judge regarding this shameful practice.

What makes the Federal Criminal Code truly despicable is its disguise as a code of fair and equal procedural protections. Indeed, this deception makes West's Federal Criminal Code and Rules worthy of inclusion among other infamously cruel books of human history. It deserves a place on the shelves next to the Communist Manifesto, Mein Kampf, and Keynes' General Theory of Employment, Interest, and Money. The Federal Criminal Code documents the advancement of coordinated, systematic scheme of state tyrannical control — with a procedural overlay.

Previous article by Roger I. Roots, J.D., Ph.D.: The Long Forgotten Obligation to Resist the State on Behalf of Others

Ghost of Kyoto: Government Control By Any Means The Case for Discrimination