The power of every state ultimately depends on a statist ideology that glorifies the state and its functionaries while denigrating and attacking the civil society, private property, and private enterprise. This is as true of democracy as it is of totalitarian socialism. For as Murray Rothbard pointed out, every state is managed by a relatively few individuals who are greatly outnumbered by the masses, who can overthrow the rulers at any time. The state can use violence and terror to keep the masses in line, as was the case with socialism all throughout the twentieth century, but propaganda and brainwashing can be more cost-effective. Thus, the state and its army of court historians endlessly glorify its "heroes" such as Abe Lincoln and Teddy and Franklin Roosevelt, while attacking, smearing, distorting, vilifying, or ignoring the more effective champions of a free society.

For more than two hundred years, Thomas Jefferson has been considered to be America’s prophet of liberty. He was the author of the Declaration of Independence; of the Kentucky Resolve of 1798; the Virginia Statute of Religious Liberty; and countless speeches and letters that articulated his view that that government is best which governs least. He opposed central banking, corporate welfare, protectionist tariffs, and the Hamiltonian subversion of the Constitution with its theories of "implied powers" and its expansive interpretations of the plain language of the General Welfare and Commerce Clauses. 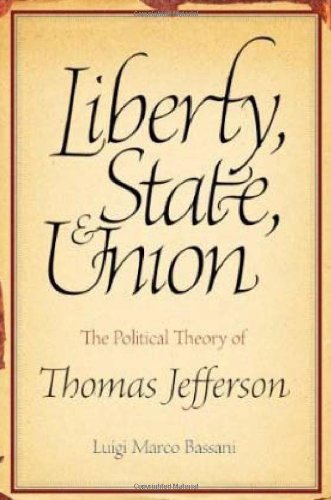 All of this is why, for decades, leftist academics have grossly misrepresented Jefferson’s views in their writings, so much so that entire books have been written arguing that he was a precursor of Marx and Engels! If they are not distorting Jefferson’s libertarian philosophy they are blowing the reputations of his critics, such as Hamilton, way out of proportion. If that doesn’t work, then they resort to personal, ad hominem attacks in hopes that such attacks will encourage younger Americans who have not yet educated themselves in the ideas of the founders will ignore Jefferson completely. He was a Southerner and a slave owner, after all (as opposed to the benighted Hamilton, the Northern slave owner).

Thankfully for the advocates of a free society, Luigi Marco Bassani has just published a wonderful new book on Jefferson entitled Liberty, State, & Union: The Political Theory of Thomas Jefferson, that sets the record straight. Bassani names names and documents how certain leftist academics have ridiculously portrayed Jefferson as "a nonindividualistic, antiproperty Jefferson, with possible communitarian if not even protosocialist overtones." There are even some, Bassani writes, "who have presented the third president as a forerunner of Karl Marx and Fredrich Engels."

Because of his well-known affinity for French culture, Jefferson’s enemies, during his time and ours, have accused him of having favored the violent, revolutionary ideology of the French Jacobins, based on the ideas of the French philosopher Jean-Jacques Rousseau. But as Bassani, an American-born professor of political philosophy at the University of Milan, proves: "In fact, there is no reference at all to the political thought of Jean-Jacques Rousseau" in Jefferson’s voluminous writings, "not even during Thomas Jefferson’s French years" when he was the American Minister to France.

It is well known that Jefferson thought very highly of the philosopher John Locke, an important figure in the history of classical liberal thought. He famously stated that, during his time, the three greatest men that civilization had produced were Locke, Francis Bacon, and Isaac Newton. (Hamilton responded by saying Julius Caesar would be his pick for "greatest human"). Despite the well-documented fact of Locke’s influence on Jefferson, especially on the issue of private property, leftist academics such as Garry Wills "have devoted much time and effort trying to prove that Jefferson was not a Lockean." Bassani explains why Wills’ book on the subject should have been entitled "Inventing Jefferson."

Another way in which leftist academics have perverted Jefferson’s writings is to banish Christianity from them. The purpose here is to attack the idea that human rights are natural rights granted to us by God, and not by any government. According to this view, as Bassani explains, "[M]an is a brute beast bereft of individual rights who can only be saved by the state . . . " Believing otherwise (i.e., agreeing with Jefferson) is like believing in witches and unicorns according to one Alasdair MacIntyre.

In his third chapter, which contains 156 footnotes, Bassani destroys the nutty idea that Jefferson was some kind of communistic opponent of private property rights, as some of the more absurd leftist academics have argued. In his chapter on Jefferson’s constitutionalism Bassani expertly presents Jefferson’s states’ rights vision of the federal government serving as the agent of the free, independent, and sovereign states, almost exclusively for foreign policy purposes. As Jefferson stated during his 1800 presidential campaign, "The true theory of our constitution is surely the wisest and best, that the States are independent as to everything within themselves, and united as to everything respecting foreign nations. " Twenty-four years later, Jefferson reiterated this view in a letter in which he said, "the best general key for the solution of questions of power between our governments, is the fact that every foreign and federal power is given to the federal government, and to the States every power purely domestic . . . . The federal is, in truth, our foreign government, which department alone is taken from the sovereignty of the separate States."

Another myth about Jefferson that Bassani disproves is the myth that he had an antipathy toward trade, banks, and commerce. "There is in Jefferson no political bias against trade and commerce or finance," he writes. What Jefferson opposed was the oppressive policy of government in taxing American farmers in order to subsidize politically-connected businesses. He opposed Hamiltonian mercantilism, in other words, while championing Smithian capitalism. "He who is against domestic manufacture," Jefferson once said, "must be for reducing us either to dependence on that foreign nation [England], or to be clothed in skins, and to live like wild beasts in dens and caverns. I am not one of these."

Bassani also does an admirable job of explaining how Jefferson smoked out the true intentions of his nemesis, Alexander Hamilton, who essentially wanted to import the corrupt system of British Mercantilism to America. This is the very system that the Revolution was fought in opposition to. Jefferson and his followers believed it would be an outrage and destructive of liberty and prosperity to adopt such a system. Jefferson formed this opinion because he was well educated in the economics of his day, especially the writings of Adam Smith and the French physiocrats. Hamilton, by contrast, was somewhat of an economic ignoramus who articulated all of the propagandistic superstitions that had been employed to prop up British mercantilism.

The most important chapter of Liberty, State, & Union is Chapter 6, "The Nature of the American Union: Jefferson and States’ Rights." The core of Jefferson’s idea here is what Jefferson wrote in the Kentucky Resolve of 1798, which explained why the state of Kentucky was nullifying the federal Sedition Act, which effectively outlawed free political speech in America. Jefferson defined political tyranny as "the consolidation of power in a single center" and, consequently, he believed that under the American system of government, it was essential that the citizens of the states be acknowledged as the true sovereigns, and as having such rights as nullification and secession as means of asserting that sovereignty and defending themselves against a consolidated tyranny. As Bassani writes, "Jefferson asserted that the states, inasmuch as they were sovereign parties entering into the constitutional compact, had created the federal government simply as their agent, subordinate to their own power, and designed to carry our limited and well-defined functions. As a result, the federal government had no right to expand its own sphere of authority without the agreement of the contracting parties." 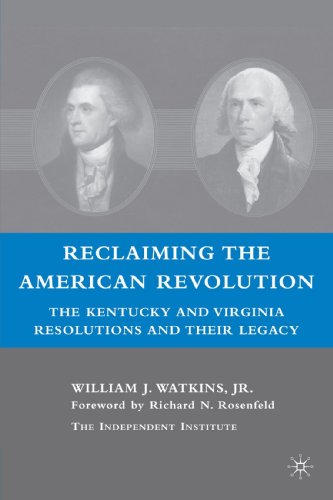 Unlike Lincoln, who espoused a totally false theory of the American founding (that the federal union created the states, not the other way around), "the author of the Declaration of Independence no more valued union for its own sake than he did government. He judged it . . . by the ends it served. For Jefferson, as for many political thinkers of the period prior to the Civil War, the union was an experiment in liberty and in no way constituted an end in its own right."

This, and other parts of Liberty, State, & Union, gives the lie to another bizarre reinvention of American history — the false notion peddled by Harry Jaffa and his fellow Straussians that Lincoln was a Jeffersonian. Nothing could be further from the truth. As Bassani shows, it was power-hungry nationalist politicians like Daniel Webster, Joseph Story, and Abraham Lincoln who created and perpetuated the ridiculous myth that the "whole people" of America somehow created the federal union in some kind of national plebiscite, and that the union therefore had some sort of "mystical" value (Lincoln’s word). These men did this as part of their political crusade for consolidated and monopolistic political power vested in the central government. The purveyors of this myth today are the Straussian Lincoln cultists on the "right," who favor a powerful central government than act as the world’s policeman militarily, along with leftist Lincoln cultists such as Garry Wills and most other "Lincoln scholars" who favor a powerful central government that can enlarge the welfare state if not adopt full-blown socialism.

The Jeffersonian view of the Constitution was all but whitewashed out of existence after the conclusion of the War to Prevent Southern Independence. It was a hundred years before another book would be written about the Kentucky and Virginia Resolves of 1798, for example (William J. Watkins, Reclaiming the American Revolution). The Kentucky Resolve is the best illustration of Jefferson’s thinking about constitutionalism.

American history was rewritten by the victorious and newly-dominant New England Yankees, just as Russian history was rewritten by the Soviets after their revolution. That is why public schools, which had primarily existed only in the North prior to the war, were imposed on the Southern states during Reconstruction and in the succeeding decades. Liberty, State, & Union is the best book on Jefferson’s political thought to be published in the past half century. It is essential reading for anyone who wants to understand why it is that Americans continue to be enslaved by a monstrously bloated, monopolistic government that plunders every productive person in the society mostly for the benefit of the state’s corporate benefactors and its supportive welfare state parasites.

Previous article by Thomas DiLorenzo: Was There a 'Culture of Violence' in the Old West?