Danger in Numbers: The Decline of Paper Currency

I waited until I had sobered up to re-read Agora Financial’s 5-Minute Forecast, where it reported that “Bill Clinton shocked us the other day when he came out and suggested the financial crisis would never have happened if the dollar was still tethered to gold.”

Notice that they used the word “shocked,” because that was when I realized that I was too blotto to be likewise “shocked” at such an admission, but was obviously too plastered to feel shock, much less have any sensation left in my lips or even feel myself drooling into my lap.

And speaking of shocking, Jim Willie CB of GoldenJackass.com wrote an essay titled “Shock Events & Gold Breakout” in a thorough, connected way, but without screaming his guts out in anger and fear, perhaps because his lips are also numb from trying to drown his outrage and fear with alcoholic excess, although he doesn’t admit it, he does admit that “public disgust and anger is growing fast” a fact to which he ascribes the notion that “The Tea Party movement has gained acceptance and vigor at the grassroots level” which is certainly true enough about me! 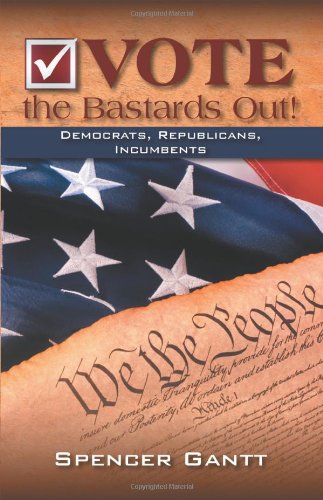 Vote the Bastards Out!... Gantt, Spencer Check Amazon for Pricing.

But, wait! Perhaps it IS about that, as Mr. Willie says, “We are witnessing the end convulsions of the fiat paper monetary system. The currencies are all dying.”

As a result, he says, “Gold will rise until given proper recognition, then it will rise even more” a taste of which will be when gold reaches “$2000 in price within the next two years time” which comes out to a tidy 30% gain per year.

And it looks like other people have also come to the same conclusion, as a gold-buying fever is reported to be sweeping the world. Agora Financial’s 5-Minute Forecast reports that “The Austrian Mint has sold more Philharmonic coins in the last two weeks than it did in the entire first quarter of 2010” which seems entirely apropos for Austria, since the only true economic theory is called the Austrian school of economics!

Coincidence? Maybe. Gold going up in price, in a dead-bang certainty, for years and years to come? You betcha!

Perhaps Atimes.com put it best when summarizing one of my columns: “…when the idiots at the European Central Bank and the US Federal Reserve can press a button and produce a trillion dollars from thin air, who needs math? All you need is gold, and lots of it.”

And since nothing could be easier than buying gold, silver and oil when they are so absurdly cheap in an era of continual, catastrophic, crazy creation of more and more money, what can you say except, “Whee! This investing stuff is easy!”?

Previous article by Richard Daughty: Dumbing Down the Econ Curriculum