Portions of this article were subject to deletions by the Israeli Military Censor.

The United States Embassy in Tel Aviv, in a prime beachfront location at 71 HaYarkon Street, is six stories tall, not including the mysteries on its roof. Israeli intelligence operatives and journalists have for many years suspected that atop the embassy and perhaps in its basement are sophisticated surveillance systems that keep a close electronic eye on the Jewish state. Certainly, as is standard in most any U.S. Embassy, there is a suite of offices comprising the CIA station, its staffers given diplomatic titles such as “second secretary.” No attempt is made to hide their identity from Israeli authorities because this host government is considered friendly.

Friendship between nations, especially in the volatile Middle East, is not naïve. The Mossad and other Israeli security agencies, as well as top politicians, assume that the United States routinely listens to their phone conversations, copies fax messages, and intercepts email messages – data known in the spy business as comint (communications intelligence) – and also gathers sigint (signals intelligence), which involves analyzing data transmitted on various wavelengths by Israeli military units, aviation manufacturers, space launch sites, labs suspected of doing nuclear work: any defense-related facility that puts out signals. This assumption is strengthened by the fact that more than 20 years ago, embassy officials approached Israeli authorities with a request to rent office space in the Mandarin Hotel, on the beach north of Tel Aviv. Permission was denied, because that location is on a precise east-west line barely a mile from Mossad headquarters (inland at the Gelilot highway intersection) and a bit farther from the equally secretive military intelligence codebreaking and high-tech surveillance Unit 8200. 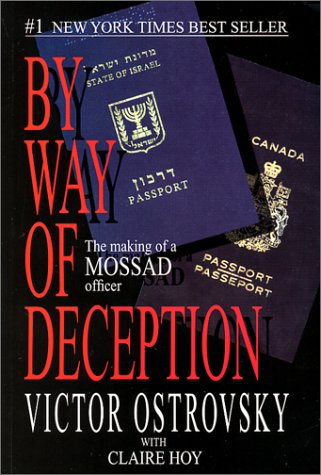 If Israeli counterintelligence – the spy-catchers at Shin Bet (the domestic security service known to Israelis as Shabak) – really wanted to check the roof or the basement on HaYarkon Street, perhaps they could break in to the building. In 1954, U.S. security officials at the embassy found microphones concealed in the ambassador’s office. In 1956, bugs were found attached to two telephones in the home of an American military attaché. Shin Bet also made crude attempts to use women and money to seduce the U.S. Marines who guarded the embassy. However, in the view of top Israeli intelligence insiders, the mystery of the roof – even though they have noticed that some antennae and equipment are covered – is closer to an urban espionage myth. The United States can easily park signals-intercepting ships in the Mediterranean near the Israeli coast; the U.S. National Security Agency controls plenty of spy-in-the-sky satellites and can watch and listen to most anything on the NSA’s agenda.

Indeed, there is no doubt the Americans regularly listen in to the private communications of the Israeli government and military. Hebrew linguists are trained and sought after by the NSA. The clearest case of such U.S. spying on Israel came to light in 1967, when the U.S. Navy’s ship Liberty was attacked by Israel’s air force during the Six Day War. Thirty-four American sailors were killed, and many of the survivors say their mission was to gather comint and sigint about Israeli and Egyptian military moves and plans. Most of them think the attack was intentional, to blind and deafen that particular NSA intelligence operation, but Israel firmly denies it.

Being in the business of collecting information, intelligence agencies know very well that everyone does it, friend or foe. Certainly the CIA station, based in the embassy, busies itself with clipping newspapers, harvesting web articles, recording radio and TV broadcasts, talking with Israelis, analyzing the results, and reading between the lines. Yet our image of espionage usually means running agents: recruiting people to betray their country for money or other motives. “In my 21 years in the agency, I never saw any official request for us to go recruit Israeli citizens,” says Robert Baer, a longtime case officer in the Near East Division of the CIA’s Directorate of Operations. “They don’t have to,” said a former head of the Mossad who asked not to be identified by name. “They can get – and probably do get – whatever they want, because we Israelis don’t know how to keep secrets. We are talkative, and the CIA has great access to all levels of the Israeli government.”

While the CIA and Israel’s intelligence community have enjoyed close liaison in recent decades, cooperation has not always been the norm. From its founding in 1948 as a socialist country led by immigrants from Russia and Eastern Europe, the State of Israel was perceived by the CIA as part of the hostile Soviet sphere of influence. In 1951, David Ben Gurion toured the United States, met with General Walter Bedell Smith, Truman’s director of central intelligence, and convinced U.S. intelligence to give Israel a try. A highly personal relationship between the intelligence communities was forged, and James Jesus Angleton, who would become legendary for his obsessively suspicious counter-spy campaigns, was put in charge of the U.S. side. Israeli intelligence assigned Amos Manor and Teddy Kollek, who later would enjoy decades as mayor of Jerusalem, as his counterparts.

“It wasn’t easy to persuade the anti-communist Angleton that we could be friends,” Manor told us before his death two and a half years ago. “Even I was suspected by him, that I was a Soviet spy.” Manor, an Auschwitz survivor, had emigrated to Israel from Romania, which became a communist country after World War II. Over sleepless nights at Manor’s apartment on Pinsker Street in Tel Aviv, the Israeli did his best to keep up with Angleton at whiskey-sipping and chatting about the world. The two men became close friends, laying the foundation for CIA-Mossad intelligence cooperation as Manor proved to Angleton that what had been considered an Israeli disadvantage could be turned into a great advantage: Israel’s population of immigrants from the Soviet Union and its East European satellites made the country an indispensible source about everything that interested the CIA at the height of the Cold War, from the cost of potatoes behind the Iron Curtain to plans for new aircraft and ships there. The great turning point was the secret speech in Moscow in 1956 by Soviet leader Nikita Khrushchev denouncing Stalin’s crimes. A Jewish journalist in Poland procured the much-sought-after text and gave it to Israeli intelligence in Warsaw. It was quickly delivered to the CIA. 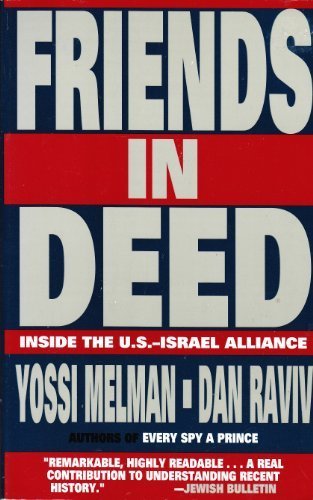 Still, while cooperating in anti-Soviet operations, the two countries had some conflicting interests. Desperate to have a qualitative military edge over its Arab neighbors, Israel ordered agents to steal U.S. technology. From the 1960s until the late 1980s, American law enforcement busted several conspiracies run by Israelis to procure defense and high-tech secrets and even components for Israel’s suspected nuclear arsenal. This clandestine work was not done by the Mossad but by military officers and by a small Defense Ministry unit known as Lakam (Lishka le-Kishrei Mada, the “science liaison bureau”), which also ran Jonathan Pollard, who is now serving a life sentence for espionage.

In the late 1950s, the prime target of American suspicion in Israel was the Negev Nuclear Research Center near Dimona, which was constructed by the French as part of a secret deal linked with the Israeli-French-British invasion of Suez, Egypt, in 1956 that took President Dwight Eisenhower by surprise and greatly angered him. The CIA was assigned to find out what the Israelis were up to in the Negev Desert. The station chief in Tel Aviv in the 1960s, John Hadden, told us he would make a point of driving as close as he could to the nuclear reactor and occasionally stopped his car to collect soil samples for radioactive analysis. Shin Bet was obviously tailing him, and an Israeli helicopter once landed near his automobile to stop it. Security personnel demanded to see identification, and after flashing his U.S. diplomatic passport Hadden drove off, with little doubt there were big doings at Dimona.

When Americans were permitted to enter the Dimona facility as part of a deal with President John F. Kennedy, “it cost us a hell of a lot of money to arrange it so their inspectors wouldn’t find out what was going on,” the late Israeli Foreign Minister Abba Eban told us, as quoted in our book Friends In Deed. False walls were erected, doorways and elevators were hidden, and dummy installations were built to show to the visitors, who found no evidence of the weapons program secreted underground. [Sentence deleted by the Israeli Military Censor.]

Nuclear gamesmanship did not spoil the progress of friendly connections between the two intelligence communities. John Hadden set the pattern for all future CIA station chiefs in Tel Aviv by spending most of his time in open liaison activities, cultivating ties with Israeli officials in all fields. Hadden remembers attending a diplomatic dinner in 1963, when he was well aware that Israel, then an austere nation, saw Americans as hard-drinking and garrulous. Usually keeping his CIA-taught language skills to himself, he heard the hostess say hopefully to an Israeli colonel that if Hadden kept imbibing perhaps he would talk too much. The puckish spy smiled and surprised his hosts with his decent Hebrew: “Nichnas yayin, yotzeh sod!” which means “Wine goes in, a secret comes out!”

The next two decades would see gradual growth in mutual confidence, as U.S. interests in the Middle East increasingly matched Israel’s concern with Arab radicalism and Palestinian terrorism. Yet in 1985, when Jonathan Pollard was arrested at the gates of the Israeli Embassy in Washington, by coincidence the CIA was assessing a “walk in”: an Israeli officer, Major Yossi Amit, who had served in a secretive military intelligence unit. As far as we know, Major Amit was the closest the CIA got to recruiting an Israeli as an agent. In his hometown of Haifa, Amit met a U.S. Navy officer who introduced him to the CIA. Amit offered his services as an experienced case officer who had run Syrian and Lebanese networks. He flew to Germany and spent time with CIA operatives and a psychologist, who used a polygraph and other tests to judge his credibility. This evaluation was handled well away from the CIA’s Tel Aviv station, though a counter-terrorism officer stationed in Tel Aviv was part of the team in Germany.

Amit claims that he did not intend to betray or spy on Israel, but he might have been willing to help the CIA in various Arab countries. He was arrested by Israeli authorities, tried in secret, and served seven years in prison.

In the 1990s, with an Israeli-Jordanian peace treaty and Israeli-Palestinian negotiations brokered by the United States, the CIA’s involvement in the region leapt forward. The Tel Aviv station was enlarged and given duties far beyond liaison with counterparts in the Mossad. The CIA’s new assignment was to turn Yasser Arafat’s secret police and commando units into a professional entity that would be pro-peace, pro-American, and in effect agents of influence for the CIA.

George Tenet, as deputy CIA director before getting the agency’s top job, was given the task in 1996. As Tenet wrote in his memoirs, At the Center of the Storm, he was reluctant, but it was an order from President Bill Clinton and he understood: “Security was the key. You can talk about sovereignty, borders, elections, territory, and the rest all day long; but unless the two sides feel safe, nothing else matters.”

The Sociopathic Dance of PoliticsEaster Sunday: A Syrian Bid to Resurrect Aramaic, the Language of Jesus Christ