Punishment Park is a movie done in pseudo-documentary style, directed and written by Peter Watkins.

The year is 1971. The Viet Nam war is at its height, and social tensions run even higher. Doing its best job of imitating the communist governments we are supposedly at war with, the US Government is rounding up political dissenters, seditionists, accused communist sympathizers, and general ne'er-do-wells. Some are being held incommunicado without bail for days, others for months. All the accused eventually come before a citizens' tribunal; all are declared guilty, and few are given a chance to speak in their own defense. Those that make unapproved statements or exhibit anger at their detention and incarceration are restrained, beaten and gagged. Lengthy prison sentences are handed out like so much candy. A choice is given to the guilty: Serve out your sentence is a federal prison, or subject yourself to Punishment Park. 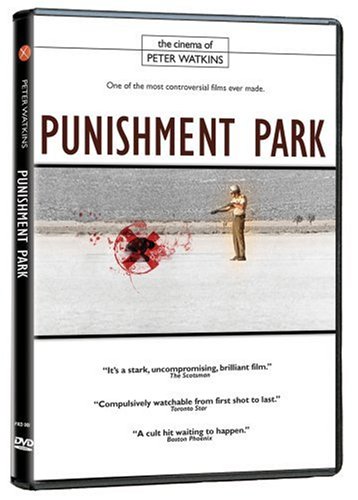 This apparent way out is not exactly a cakewalk – it's a three-day, 53-mile forced march through the Southern California desert, in the middle of a heat wave, with no food or water. They are given a several hour head start on armed California troopers and National Guardsmen. The goal is to make it to an American Flag at the end of the 53-mile trek, but if you're apprehended anywhere before then, you're re-arrested and sent to serve out your intended prison sentence; resist in any way, and you'll be shot on sight. Things can, and do, go horribly awry for the prisoners — the authorities have a couple surprises in store for them.

The movie is shot in the style of a network news team's coverage of the proceedings, with a shaky, sometimes unfocused hand-held camera that made movies like The Blair Witch Project and Cloverfield all the rage. The real-life conditions in the California Desert where it was made seem to have had an effect on many of the actors participating, as there are more than a few scenes where tempers look like they're running pretty high.

The most interesting to me was that in the almost 40 years since the movie was made not much has changed. Pretty much all of the issues at hand in the movie are relevant to today — race, the meanings of freedom and liberty, patriotism, The Constitution, civilian/police interactions. You can almost interchange the word "communist" with "terrorist" throughout the film and the movie might as well have been made last week.

With indefinite and preventative detention (a pair of terms actually used in the film), secret tribunals, presumption of guilt without a chance or even a way to prove innocence against spurious charges, Punishment Park shows us a world where the rule of law has become a rule of men. Poets and songwriters are just as guilty as the Black Power advocates and accused Communists. There's even one man who is there because he is unemployed and is seeking to flee to Canada to avoid the draft because he is a pacifist. All are brought before the same tribunal to have their patriotism questioned, and found lacking, punished accordingly.

The people who make up the Tribunal Boards are, for the most part, ordinary, every-day Americans — a US Senator, a housewife, a union worker. They seem more interested in proving that they are "more American" than the prisoners than in getting at any truth that might be found in the proceedings. The union worker metes out insults more than any of the others, though the housewife does get into a particularly visceral exchange with a convicted poet (think about that one for a minute). The prisoners do have an appointed defense attorney present, but his motions and objections are overruled, often without explanation. He gives it his best shot, and towards the end makes a short but powerful speech, which is summarily ignored by the tribunal in the extra-Constitutional proceedings.

All in all, Punishment Park gave me a window into a chaotic world that was a few years before my birth, and it gives me an eerily similar view into the world I now have before me. Most striking is the view of the LEOs and tribunal board members that they are somehow better than those they stand in judgment of.  Their blind patriotism and "America — right or wrong" attitude strongly parallels the rhetoric of today's neocons and neolibs. While it is fiction, Punishment Park does offer us a glimpse of what the State has and is continually erecting around us, and gives us a view into the mindset of the people who worship the State and actively participate in the persecution of their fellow citizens, without regard to the fact that they are only one election away from being on the other side of the tribunal when the opposite head of the War Party comes into power. There's no doubt in my mind that people such as this exist today on both the right and the left, and would jump at the chance to pass their judgment on any of us in a similar fashion.

There are a number of memorable quotes in the movie, but my favorite has to be this one: A black man, a member of a group known as The Peoples' Army, is brought before the tribunal because of his alleged plans to violently overthrow the government. This man, as opposed to a number of the other prisoners, is intelligent and well spoken. When asked about his and his groups objectives, the union worker condemns him as a purveyor of violence and writer of seditious material — why, if he so loves his country, would he plan to engage in violence to achieve his goals. His answer is one that will stick with me:

"You talk as if this is some great, non-violent, civilized place, and it ain't. America is as psychotic as it is powerful, and violence is the only God-damned thing that will command your attention."