How Jeffrey Tucker and LRC (Literally) Saved My Skin

Almost four years ago on a morning on which we were preparing to take our children to the zoo in Washington, D.C. (that is, the real zoo with lions and tigers and bears, not Capitol Hill and 1600 Pennsylvania Avenue), I read an article that changed my life and saved my skin. Jeffrey Tucker had a piece on LRC in which he claimed shaving cream is a u201Cracket,u201D and that we need to liberate ourselves from it.

I always have found Jeffrey’s articles to be enlightening and entertaining. There is his piece on the tyranny of the government toilet, his series on the folly of u201Cintellectual property,u201D and his classic piece on a u201Cman’s greatest fear.u201D Indeed, if there is a man dispensing advice that is good advice, unlike the bad advice our statist masters give us, it is Jeff Tucker.

Thus, I read his shaving cream article with interest and trepidation. Here was a guy who claimed that throwing away the shaving cream — my shaving cream! — would liberate my skin and still allow me to run that razor over my face and remove the stubble (or what pretends to be stubble), and still let me have a close shave. How was this possible? Yet, Jeff said it could be done. 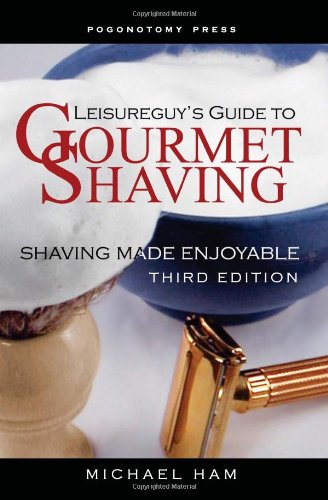 Here are some of his own words, lest people forget this classic:

People think: oh I need a new razor! So they go out and buy ever more fancy brands, with multiple blades, pivoting heads, strange lubricants, and push-out tools to deposit the hair remains in the sink.

They don’t consider that it might be the shaving cream that is the source of the trouble.

Why don’t people imagine this possibility? Because shaving cream seems so frothy and innocent, the glorious barrier that stands as a guard or shield between your skin and the sharp blade. The cream is our valiant protector, so surely that is not the source of the problem!

In fact, it is not our protector. Shaving cream is destroying your skin, turning it into a whining, pathetic, dependent, beaten, insipid layer of pasty pulp. Your skin has become the fatted calf that has been killed, the lamb slain on the altar, the virgin sacrificed in some ancient cannibalistic ritual of an uncivilized people.

That was me! For months, my face felt as though it had gone through the flames, as though shaving were an exercise in purifying my very soul. Shaving? Waterboarding? I’ll take the latter!

Yet, I did not want to grow a pathetic beard as an antidote to this daily routine of torture. (Actually, my wife did not want me to grow a beard, as she understood that not only would it look ridiculous, but would feel ridiculous, at least to her.)

So, I saw where for starters Jeff recommended that I use mineral oil. Since we had nothing like that in our house, I got some Canola oil (yeah, that’s right, cooking oil) and tried it, and it seemed to work. Later, I purchased mineral oil and used that for a few months until someone suggested I take the plunge: warm water!

So, in the summer of 2006, I stepped into the Great Unknown and shaved using only warm water and no lubricants at all. Voila! It worked! Furthermore, my face felt fine. Since that time, shaving cream has not polluted my home and I receive a shave that was closer and more comfortable than I could have imagined when Gillette Foamy covered my face. In fact, the other morning I was unable to access hot water and did it with…cold water. No, my face did not hurt, the stubble disappeared into the drain, and I still did not need to splash on aftershave, just more cold water.

So, four years later, the burn is gone. (Maybe the shaving cream commercials should channel the u201CFeel the Burnu201D slogan of gyms.) Furthermore, shaving takes less than a minute and no longer is a daily routine that reminds one of an unwanted trip to Lubyanka Prison during the days of Stalin. And you thought the value of reading LRC was limited to exposing government!

Previous article by William L. Anderson: Another Clueless Columnist From the NY Times

Who Is a Jew? DNA Can Hold the Key Alcohol, Tobacco, Firearms