Naomi Wolf Thinks the Tea Parties Help Fight Fascism – Is She Onto Something or in Fantasy Land?

In her bestselling End of America, Naomi Wolf outlines the 10 warning signs that America is headed toward a fascist takeover. Using historical precedents, she explains how our government is mimicking those of Mussolini, Hitler and Stalin through practices like surveillance of ordinary citizens, restricting the press, developing paramilitary forces and arbitrarily detaining people.

The book was lauded by liberals under Bush: the Independent Publishers gave it the Freedom Fighter Award; John Nichols at the Nation named it the most valuable political book of 2007. Now, under President Obama, Wolf’s book is providing ammunition for the Tea Partiers, Patriots, Ron Paul supporters and Oath Keepers, who also warn of impending tyrannical government. Even when the book first came out pre-Obama, Alex Jones, Michael Savage and Fox News invited her on their shows, and agreed with her.

It’s not just her message. She speaks their language, referring to the Founding Fathers and American Revolution as models, admitting to a profound sense of fear, warning of tyranny, fascism, Nazism and martial law. When Glenn Beck warns of these things we laugh. When Wolf draws those same connections, we listen. How can both sides be speaking the same language, yet see things so differently? Or are we just not listening to each other? I telephoned Wolf to ask her what it means when your book ends up bolstering policies you oppose. 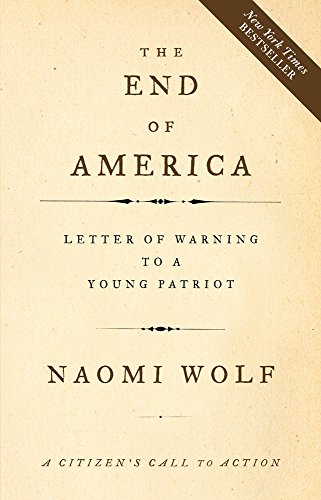 Justine Sharrock: First off, is your book still relevant under Obama?

Naomi Wolf: Unfortunately it is more relevant. Bush legalized torture, but Obama is legalizing impunity. He promised to roll stuff back, but he is institutionalizing these things forever. It is terrifying and the left doesn’t seem to recognize it.

JS: Did you realize that your book is being lauded within the Tea Party and patriot movements? 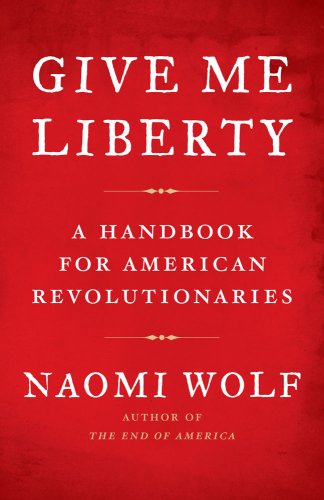 NW: Since I wrote Give Me Liberty, I have had a new audience that looks different than the average Smith girl. There is a giant libertarian component. I have had a lot of dialogue with the Ron Paul community. There are [Tea Partiers] writing to me on my Facebook page, but I figured they were self-selective libertarians and not arch conservatives. I am utterly stunned that I have a following in the patriot movement and I wasn’t aware that specific Tea Partiers were reading it. They haven’t invited me to speak. They invited Sarah Palin.

JS: If they did invite you, would you speak at a Tea Party?

NW: I would go in a heartbeat. I’ll go anywhere to talk about the Constitution. I believe in trans-partisan organizing around these issues. When I went on Fox News people asked me why I was going on those shows. Are you kidding? You have to go, especially to people you don’t agree with. We need to get back into grappling with people we disagree with if we want to restore the Republic.

I was invited by the Ron Paul supporters to their rally in Washington last summer and I loved it. I met a lot of people I respected, a lot of “ordinary” people, as in not privileged. They were stepping up to the plate, when my own liberal privileged fellow demographic habituates were lying around whining. It was a wake-up call to the libertarians that there’s a progressive who cares so much about the same issues. Their views of liberals are just as distorted as ours are of conservatives.

JS: Why do you think the sides don’t understand each other?

NW: Frankly, liberals are out of the habit of communicating with anyone outside their own in cohort. We have a cultural problem with self-righteousness and elitism. Liberals roll their eyes about going on "Oprah" to reach a mass audience by using language that anyone can understand even if you majored in semiotics at Yale. We look down on people we don’t agree with. It doesn’t serve us well.

There is also a deliberate building up of two camps that benefits from whipping up home team spirit and demonizing the opposition. With the Internet there is even more fractioning since we are in echo chambers. With so much propaganda it is hard to calm down enough to listen.

JS: What do you think is the biggest misconception about the Tea Parties?

NW: The Tea Party is not monolithic. There is a battle between people who care about liberty and the Constitution and the Republican Establishment who is trying to take ownership of it and redirect it for its own purposes.

JS: In your essay, “Tea Time in America” you said that some of the Tea Party’s proposals are “ahead of their time.” What are some examples?

NW: I used to think “End the Fed people” were crackpots. The media paints them as deranged. But it turned out we had good reason to have more oversight. Or take their platform about states’ rights. Demographically, I’m a hippie from San Francisco and I’m not culturally inclined to be sympathetic to states’ rights. My cultural heritage is FDR and Medicare and federal government solutions. But if you think through the analysis, strengthening state rights is a good corrective of the aggregation of an over-reaching federal power. Take California’s challenge of the Patriot Act or states like Vermont leading the way with addressing the corruption of the voting system. It’s a good example of the Tea Party thinking out of the box on how to address a problem.

It's Official – America Now Enforces Capital Controls Opposed to Obamacare? Then You Must Be a Racist