Have you ever seen a bureaucracy beg more tirelessly for abolition than the Transportation Security Administration (TSA)? For a month now, its spectacular ineptitude has hogged headlines, from the agency’s posting of its classified nonsense on the internet to its welcoming the Underwear Bomber aboard his plane.

You might think the latter especially would result in something a bit less tepid than the usual calls for reform. After all, the TSA is supposedly in charge of "protect[ing] the Nation’s transportation systems to ensure freedom of movement for people and commerce." Taxpayers footing its $7-billion annual bill construe that very narrowly: they expect screeners to find boneheads such as Umar Farouk Abdullmutallab and hustle him off to jail rather than down the jetway, sans passport. They haven’t yet realized that the agency interprets its "mission" far more broadly, e.g., to ferret out potheads and pornographers, teach serfs who still think they’re citizens their place, forcibly unionize screeners to produce 50,000 Democratic voters, and reward corporations that bribe — sorry, contribute to politicians with multi-million dollar contracts.

Meanwhile, the TSA doesn’t just fail to detect guys dressed in explosives. It’s been up to its usual antics the last few weeks, even if its stunt with Umar overshadowed all else. I present the following incidents solely for their entertainment-value: it’s unlikely that the bungling, pathology, and all-around nuttiness they highlight will convince anyone to abolish the TSA if Umar hasn’t.

We go first to Meadows Field Airport near Bakersfield, California, where "A passenger’s suitcase tested positive for TNT… during a routine swabbing of the bag’s exterior, Kern County Sheriff Donny Youngblood said. When Transportation Security Administration officials opened the bag, they found bottles filled with an amber liquid…"

That’s honey to those of us who work for a living rather than hiring on with paranoid Leviathan. Yes, honey. Which sickened two of the TSA’s malingerers: when "agents opened one of the bottles and tested the contents, the resulting fumes nauseated them, Youngblood said." My parents would have told me to quit pretending, then scolded me that that’s what I get for sticking my nose where it doesn’t belong. Not the TSA: its busybodies "were treated and released at a local hospital" while "Federal officials suspended flights Tuesday to and from Bakersfield airport[,] … closed down the airport around 8:20 a.m. [and] call[ed] in a hazardous material crew. A bomb squad also was dispatched to the airport as a precaution."

This despite "the bag’s owner, Francisco Ramirez, 31, [telling] TSA officers that the bottles were filled with honey, Youngblood said. He added that u2018it gives every appearance of being honey.’" Ah, but you know how tricky sticky stuff is, especially when it lurks in bottles minding their own business inside a suitcase. I mean, it’s not as though poor Ramirez tried to entice these bozos to sample his sweet. No, they ransacked his bag and then figured him for a terrorist trying to blow them sky-high. 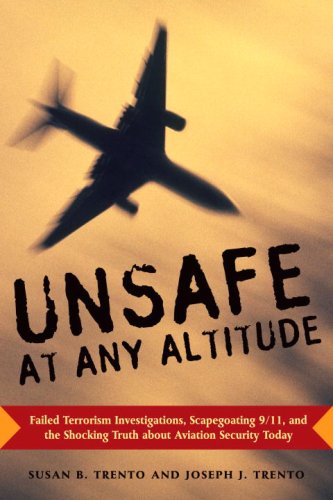 Mr. Ramizez was "detained for questioning" but "not arrested." Our Rulers distinguish between these, whatever trouble we subjects have seeing the difference. "Authorities initially questioned his immigration status"; Immigration and Customs Enforcement confirmed — reluctantly, I’m sure — "that Ramirez is a legal permanent resident of the U.S." So passengers who have complied minutely with the TSA’s rules ("If you need larger amounts of liquids, gels and aerosols…, please place them in your luggage and check them with your airline") can still count on intimidation and abuse.

Meanwhile, Sheriff Donny "The Pinhead" Youngblood wants to know “Why in this day and age would someone take a chance carrying honey in Gatorade bottles? … That itself is an alarm. It’s hard to understand.”

Yeah, but Pinhead, everything’s hard for you to understand, isn’t it?

We next head to Philadelphia, where the TSA’s canine force has proved as maladroit as its human one: "three security dogs assigned to Philadelphia International Airport…failed recent bomb-sniffing tests." Incompetent staff is a problem with which the TSA has enormous, endless experience, so its reaction is honed: the dogs "are currently in training," just as their human counterparts would be (no idiot is ever too stupid to retain his post at the TSA), while the agency denies any effect on its operation: “We can assure travelers that Philadelphia has ample canine resource to meet security requirements,” says TSA propagandist Ann Davis.

Another pooch bombed out at Minneapolis-St. Paul’s airport when he "indicated there was something suspicious about a piece of luggage." It’s a toss-up whether Rover or Our Rulers are dumber: the latter "call[ed] a bomb squad and clear[ed] parts of the airport for more than an hour" though the suitcase "was only a placeholder airline employees put on the luggage carousel to signal to other employees that all the bags have been unloaded from a flight."

The TSA grabs any excuse to shut down airports. At Newark’s blasphemously misnamed Liberty International, "a man took advantage of a [TSA] guard’s absence to sneak past … [a] security checkpoint Sunday evening and walk arm-in-arm with a woman into a secure area." He remained for about 20 minutes, no doubt plotting murder and mayhem while canoodling. A passenger so bothersome the TSA ought to hire him snitched on Romeo, and yup, the TSA closed the terminal, "delay[ing] flights across the globe and call[ing] into question just how secure the nation’s airports really are." Or so the Associated Press breathlessly editorialized. Actually, only the media’s morons and Our Masters wonder how safe airports are: the rest of us know.

This allowed the TSA to indulge in its usual histrionics: the pettier the "security breach," the more abjectly these buffoons apologize. They have yet to acknowledge any responsibility for the Underwear Bomber (whose name doesn’t even appear on their website), but let a guy cozy up to his gal, and the TSA’s heart breaks over its failure to secure aviation: “The surveillance video from Newark Liberty Airport clearly shows that a TSA officer’s actions led to the Sunday incident,” the agency mourned. “We will use this hard lesson to reinforce the sharp focus and tight discipline" — easy, there, or you’ll break a rib laughing — "at all our stations across the country and ensure we maintain the public trust.”

Psst, scuzzballs: there’s no public trust to maintain. Your own blog testifies to how much passengers hate you.

Then, too, the pettier the breach, the more vengeance the agency wreaks on those who show it for a fool. Romeo "has not been identified or located, but a TSA spokeswoman said he would face criminal charges if he is found." Well, heck, that oughta vanquish Al Qaeda.

Astonishing, the unshakeable faith Americans still place in Leviathan. Despite meaningless but ballyhooed "breaches" and Umar’s breeches, few folks — and none of our elected criminals — are demanding even now that we send the TSA packing. Why disband a totally unconstitutional, completely incompetent bureaucracy when we can reform it into even greater unconstitutionality and incompetence?

Our final stop on the security circus is at Los Angeles International. "A TSA agent was arrested on January 3rd in Terminal One…. He had just gotten off duty and was behaving erratically, saying, u2018I am god, I’m in charge.’"

Anarchy in the UK (and US, Too)?Paying Your Mortgage