I got a lot of work done on Sunday and Monday, so I took advantage of the beautiful weather today to drive to the Library of Virginia in Richmond. This is the 200th anniversary year of Edgar Allan Poe’s birth, and all year they have had a major exhibit on Poe. It is ending this week, so I wanted to catch it before it closed. I took the curator’s tour – the curator of this exhibit was Chris Semtner, who is also curator of the Poe Museum in Richmond. He was very knowledgeable.

As a long-time fan of Poe, I knew, of course, that he is the father of the detective story – that’s why the Mystery Writers of America call their annual awards “Edgars,” which physically are small busts of Poe. But I learned that he also invented science fiction, having great influence on Jules Verne, who then went on to write some pioneering science fiction himself. Poe loved to have fun with his readers – to see what he could get away with. He wrote a story for a New York newspaper about a man crossing the Atlantic Ocean in a hot-air balloon. People believed it, and the newspaper sold out, so they repeated the story the next day. I don’t know when (if ever) readers learned that this was fiction. Calling Orson Welles!

One exhibit exclaimed that “Poe was the first American writer to earn his living by writing.” I took that as a cautionary tale, since Poe was impoverished most of his life. 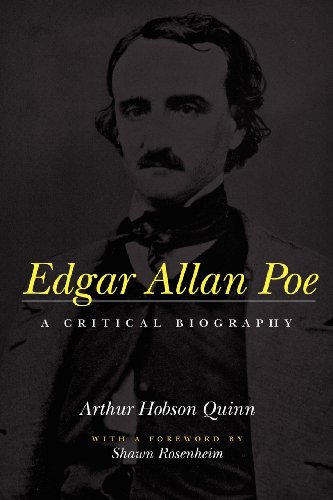 There was also a lot of bragging, claiming that Poe was the first American writer to win international fame, or something to that effect. What about Washington Irving, I asked. “We’re talking about INFLUENCE,” Chris answered. Irving, he claimed, echoing Poe, really wrote in the English style, merely substituting American locales. Poe, on the other hand, established new writing genres and styles that had great influence on literature not only in America but throughout Europe. As just one example, he broke with the Gothic horror tradition of having a moralistic lesson and ending on a happy note of virtue triumphant. Poe had no morality lessons in his tales, and often it was just the opposite, which infuriated the leading Yankee writers. There was no love lost between Poe and the Yankee scribes – both excoriated the other in print. (I’m getting to like Poe more and more.)

Poe was quite a character. In addition to being broke most of the time, he was also a drunk, of course. He was quite a ladies’ man, and there were some interesting stories about the lasting impact he had on a number of ladies before and after he married his 13-year-old cousin, who died tragically of tuberculosis at, I think, age 24. (That decade was probably the only happy time in his life – they really enjoyed life together.) He would write one of his romantic love poems, and change the name of the woman in the poem to whomever he was courting at the time. He unabashedly lied about his bio, too – saying he graduated with honors from the University of Virginia (not!) and that he fought in the Greek War for Independence (he never got close to it). Fact and fiction had a way of blurring and merging with Poe.

Interesting tidbit: Manet illustrated one of Poe’s books before going on to become one of the leading French artists.

I asked Chris for his recommendation as the best biography of Poe, and he said Edgar Allan Poe: A Critical Biography, by Arthur Hobson Quinn. It’s a fairly old book, but you can get it on Amazon.com.

The Tip of the Sandy Iceberg Prefabricated Fascists