My conspiracy theory for this report is that we never went to the moon. The whole dang thing was faked. When I had first heard of this idea, I though to my self that it was a load of rubbish. "Of course we went to the moon" Kept going through my mind. 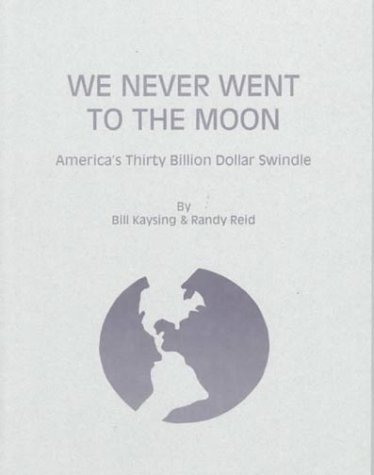 I had first heard of this Idea from a local Radio Talk Show, Ground Zero, which plays every Sunday night on KBER 101.1. They had brought up some interesting points, but I was not quite sure that I believed them, so I have taken this opportunity to study this Idea further. I am now convinced that we never landed on the moon, and it is my hope, that I can make you question it yourself. One thing that I would like to call to attention, is that I am not an expert on anything that is written in this report. I don’t know much about camera’s, or non-atmospheric conditions, or physics or anything. I am just a senior in high school, and about the only thing that I know professionally is how to run movie projectors. I challenge all that read this page to find something wrong with it, and tell me about it, so I can more accurately disprove one of the most historical events of the century….. The Landing on the Moon.

Lets Start off with the pictures

Lets face it, there isn’t really a heapload of evidence that we didn’t go to the moon. Why would there be? NASA doesn’t WANT evidence that we went to the moon. NASA wants people not to ask questions, and keep living their happy little lives. But here is some evidence that you cannot argue with. My theory is that the moon landing were set on a sound stage, not in space. (Perhaps an Air Force base near San Bernardino, called Norton Air Force Base, where they have the world’s largest sound stages under tremendously efficient security).

On the moon, there is only one light source, the sun. This is a shot of Buzz Aldrin and Neal Armstrong planting the US flag on the moon. If the sun is the only light source used by NASA on the moon, Aldrins shadow A shadows should not be so much longer than Armstrong’s.

This is a famous picture labeled "Man on the Moon" I have a poster of this picture hanging on my wall in my room, and it always gives me a chuckle.

If you will look at area B you will notice a shadow cast across Buzz Aldrin’s space suit. Once again, if the Sun is the only light source used on the moon, this shadow would have been MUCH darker.

Looking at area C you will notice that the surface of the moon fades off into the distance, then is met with the moon’s horizon. In a no-atmosphere environment, the ground shouldn’t have faded out, but stayed crystal sharp unto the moon’s horizon.

Looking at area D you can plainly see some type of structure reflected through Aldrins helmet. I do not know what it is, but it is there.

In this picture, taken from the LEM, you can see at least two abnormalities. In section E you see an abnormal shadow on the moon’s surface. NASA claims that this shadow is the shadow cast by the Lunar Module, but on earth, even when aircraft is flying low to the ground, it does not produce such a clearly defined shadow.

OK, here’s the kicker… if you will look at section 3 you will notice there are no stars in the sky. In fact, you will never see any stars in any NASA Moon photographs, or hear an astronaut mention anything about the glorious stars that are visible when out of the earths atmosphere.

If you look in areas 6 and J , you will again see no stars. In area K you will notice that one side of the LEM in covered in shadow, but somehow the symbol of the US flag in illuminated. This very well could have been a touch up job.

Preparing for Uncertain Times – a Simple Guide to Getting Ready, by Mr. and Mrs. Joe Patriot The Real Climate Change Catastrophe