Almost everyone believes in an accused person’s right to a trial by jury — it’s in the Constitution, after all — but almost everyone also dreads receiving a jury summons in the mail. It’s conscription, but into the justice system instead of the military, and it could mean anything from one wasted day to a lengthy sequestration. The prospective juror is helpless before the long arm of the law.

This past Tuesday I had my first experience with jury duty in nearly 20 years of eligibility, almost 15 of them spent in the same county. Had I any doubts about the viability or necessity of private courts before this week, that experience has surely banished them forever. In fact, the entire day I kept saying to myself, "No private court would ever operate like this. It would go bankrupt in no time flat." I even managed to convince a fellow prospective juror over lunch that private courts would be superior to government courts; our shared experience, however, did most of the convincing.

I was summoned to serve as a juror for Allegheny County, Pennsylvania, which includes the city of Pittsburgh, where the courthouse is located. I received the summons several weeks prior to my mandated appearance. The summons, though, did not specify that I would definitely have to appear on September 8, only that I must appear if so ordered. I had to wait until after 4:00 PM on the business day prior to my scheduled appearance to find out if I actually had to show up. Unfortunately, I did.

On the morning of September 8 I had to leave my productive employment behind and make my way to a parking garage in downtown Pittsburgh during rush hour, then walk from there to the courthouse.

Upon arrival at 8:30 I had to turn in my summons and listen to the woman in charge drone through a long list of instructions and explanations. Among the explanations was the fact that when we arrived she had no idea how many cases requiring a jury would come up that day, or even if any would. Furthermore, some cases on the day’s docket that at first had requested a jury might turn out not to need one after all. In other words, we could potentially have been sitting there all day for absolutely nothing.

A judge entered the room and read through another list of instructions. 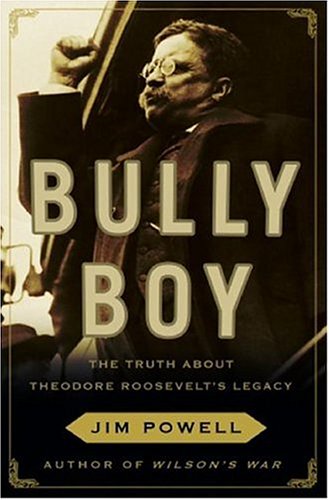 For the rest of the morning we just sat there in a hot room. Some people read; some chatted with their neighbors; other stared at the walls until they fell asleep. I read Jim Powell’s excellent book Bully Boy: The Truth About Theodore Roosevelt’s Legacy.

Around 11:50, the woman returned and told us there was a case coming up at 1:30, so we should leave for lunch and return by then. When we returned from lunch, having already wasted five hours of the day, we resumed our morning activities.

Finally, around 2:30, they began selection of the first jury. Thirty-five people were randomly selected and moved to chairs in the front of the room. The case was reviewed, and the 35 selected jurors were asked a series of questions to determine if they would bring any biases to the case. Then each juror was questioned individually by the prosecutor and the defense attorney. Ultimately 14 people — 12 regular jurors plus 2 alternates — would be selected from the 35.

While the attorneys were interviewing the prospective jurors, another group of those who hadn’t been selected for the first jury were called to another room. I couldn’t determine whether they were being sent home for the day or called for another jury, but the number seemed about right for another jury. The rest of us, a dozen or so, were sent down to the county treasurer’s office to pick up our pay — nine dollars plus mileage — and dismissed shortly after 3:00.

Even the casual observer can spot all the waste and inefficiency in such a process.

Begin with the monetary cost. First there’s the cost of administration, always high when run by the government. The visible costs, however, include the cost of mailing every summons, the pay for each juror, and the cost of mailing thank-you letters from the judge (yes, I got one a couple days later) to everyone who shows up. (Those who don’t show up get a much less friendly notice.)

There were about 80 to 85 prospective jurors on September 8; let’s use 85 as our average daily attendance. Let’s assume that on an average day two juries are selected, each consisting of 14 people. That leaves 57 people who are not needed. Those 57 still get paid, however; it probably averages to $10 per person, and quite possibly higher. That means on an average day the county is paying out $570 for exactly nothing. Multiply that by 5 days a week and 52 weeks in a year (we’ll ignore all the government’s holidays), and that means the county is disbursing a whopping $148,200 a year for people to sit around all day.

Now imagine how long a private court would last if it poured money down the drain like that! Its owners, after all, would not have the luxury of simply extorting more money from people in the surrounding area to cover those costs.

In fact, in a system of private courts, there would likely be a variety of approaches taken to settling disputes. Some courts might have each case heard by a single judge; others might have a small panel; still others might opt for a full jury. Those that opted for jury trials would then have more than one way of selecting jurors. Some might rely on volunteers, while others might have paid, professional jurors on staff or call upon a pool of jurors acting as independent contractors. Not one, I think it safe to say, would herd 100 or so people into a room every day without first knowing whether those people would be needed.

Would a private court force prospective jurors to wait until the day before their scheduled appearance to find out if they were actually needed? Some might, but prospective jurors would know that and agree to that condition in advance; such on-call jurors might well command a higher wage than those on a regular schedule.

Would a private court be so completely in the dark about how many juries it would need to select on a given day at the beginning of that very day? One suspects not. More likely the court would have settled on the need for a jury ahead of time and would have scheduled the necessary jurors for the date when they would be needed. It certainly couldn’t afford to pay so many people to twiddle their thumbs all day, especially at market rates, with the strong potential of their not being needed at all. Trials might even be scheduled around when jurors were available, rather than the reverse, as is the case with government courts.

Furthermore, would a private court really want rank amateurs, who don’t understand the intricacies of law and court precedents, to act as jurors? The current system tends to select the most uninformed individuals, those who have no knowledge of what’s going on in the world and have no opinions on anything of significance. Professional jurors would have to be knowledgeable and, probably, opinionated. This does not mean that they would let their biases influence their judgment — on the contrary, a biased juror would soon find himself out of work — but that they would have definite opinions about justice and apply those opinions to the cases they decide. We would not find many professional jurors who use their positions to "send a message" to people they dislike, as jurors did in the Martha Stewart case, for example. They would be hired and retained on the basis of their evenhandedness.

Neither can one imagine a private court hiring security guards who treat visitors as unkindly as the cops at government courts. I had to pass through a metal detector to enter the courthouse, of course. In the morning the cop didn’t really say anything; she just waited for me to empty my pockets and put my belongings on the conveyor belt. When I returned from lunch and entered through a different door, the cop at that door asked, "Are you wearing a belt?" I very politely replied, "Yes, but I went through this morning with it on." I should say I tried to reply that way, for the state’s minion cut me off in midsentence and barked, "I said, u2018Are you wearing a belt?!’" The implication was clear: submit or be cited for "disorderly conduct" or, worse, be electrocuted by a "non-lethal" weapon. No private court would treat its customers as bugs to be squashed.

Finally, there’s the perennial issue of the seen versus the unseen. The average American, having read this, might say, "At least the current system does provide us with jurors to conduct trials, even if it does waste a lot of time and money doing so. What’s the big deal of having to take a day off work for such an important duty?" This ignores the fact that every day all across the country thousands of people are forced to spend all day more or less locked in a room on the off chance that they might be selected for a jury, and of those thousands probably two thirds or more will have spent the entire day in that room in vain. While we can see the people who were selected for juries, we cannot see all the productivity lost to the private sector because so many people were compelled to waste a whole day in a courthouse; and those who are selected will lose even more productive time.

Few object to the idea of trial by jury, and no one, to my knowledge, objects to having some system for arbitrating disputes. The question is, should this function be handled by the government, which will invariably perform it in the most costly, wasteful, inefficient manner and almost certainly fail to accomplish the objective of administering true justice; or should it be handled by private courts, which will perform it much more cheaply and efficiently and must administer true justice or go out of business? After one day of jury duty, my verdict is clear: get the government out of the justice business.

The Best of Michael Tennant