The Bounce Phase of the Economic Depression

“It looks like things are finally turning around,” said a friend at Saturday night’s dinner.

The stock market crashed in ’29. The market then bounced. After a few months almost everyone was persuaded that the “worst was over.” But the worst was just beginning. It wasn’t until 1932 that the stock market finally hit bottom. By then, it was beginning to seem like a depression…and only years later did economic historians tag it as a u201Cgreatu201D depression.

This depression is still wet behind the ears… We’re still in the bounce phase. On Friday, the Dow went 113 points higher. And as the bounce continues, more and more investors will come to believe that stocks are in a new bull market and that the economy is back in growth mode.

Neither will be true.

The stock market is in a bear market rally, not a genuine bull market. The economy is entering a long depression…possibly a u201Cgreatu201D one.

How can we be so sure? Well, we’re not sure of anything. But all the signs point in that direction. Household debt as a percentage of disposable income hit a low of about 2% just at the end of WWII. It’s been going up ever since. By 2005 it nudged against 15% — seven times higher than it had been 60 years earlier. Household debt represents spending that has been taken from the future. But you can’t take an infinite amount from future earnings. You reach a point when the future can’t handle it. As more and more future earnings are absorbed by past consumption, pretty soon there’s not enough left to live on. At some point, so much of earnings are devoted to paying the interest and principle on past borrowings that the poor householder cannot to pay his expenses. And imagine what happens if his disposable income goes down.

Guess how many jobs the US private sector has added over the last 10 years? Almost none. Private sector employment is back to levels of 1999. There are more jobs in restaurants and health care…but many fewer in manufacturing. Net gain: zero.

The only job gains have been in the parasite sector — government. On the evidence, this trend is going to continue. Now, the feds have a new post called “pay czar.” As near as we can tell this is a busybody who undertakes to control salaries in the industries that the feds have bailed out. There will be a lot more jobs running the regulatory/bailout apparatus. Then, too, there are all the make-work jobs of the shovel ready boondoggles the feds began in an effort to replace private spending.

Back in the private sector, 72 banks have failed so far this year. And a record 34 million Americans are getting food stamps.

Naturally, incomes are falling. Now, imagine the consumer…he’s already paying 15% of his disposable income to debt service…and then his income is cut in half! This means that 30% of his remaining income must be used just to service the debt. Impossible to do without big cuts in spending…

The poor consumer hit the wall in 2007. He was spending all he earned…and paying more of his income in debt service than at any time in the last 60 years. He couldn’t continue to live on future earnings — there just weren’t enough of them. That is why the finance industry has topped out. It loaded Americans up with enough debt already.

And it’s why the credit cycle has turned. All of a sudden savings rates are back up to 7%. Consumers are cutting back…raising chickens in their back yards…driving less…planting gardens and squeezing their nickels. The private sector is de-leveraging. And there won’t be any durable economic boom or lasting bull market on Wall Street until this process is finished.

Harvard professor Ken Rogoff says it will take 6—8 years for households to reduce their debts to a more sustainable level. Let’s see. We reported on Friday that the big upswing in credit over the last 60 years added about $35 trillion in excess debt to the system. But not all of that is private debt. 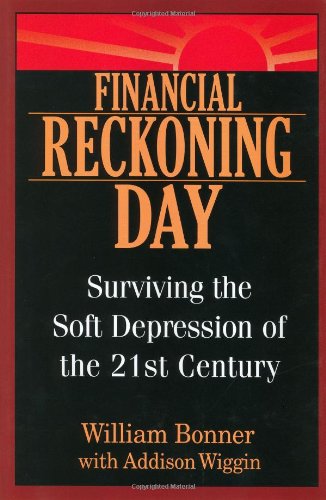 Taking the period of the bubble years, in 2000 total debt in the United States came to $26 trillion. Now, it’s twice that amount — $52 trillion, of which $38 trillion is private…or more than two and-a-half times GDP. At this level, the private debt absorbs roughly one out of every seven dollars in consumer earnings — in interest and principal payments.

If the private sector undertook to reduce debt back to 2000 levels, it would mean eliminating all the debt accumulated during the bubble years — or about $19 trillion. How long will it take to pay down, write off, inflate away and otherwise shuck $19 trillion? Well, inflation is running below zero — so that is not now a source of debt reduction. Between write-offs and pay-downs, about $2 trillion has already been cut — over, very roughly, the last 2 years. At least the math is easy. At that rate, it will take 19 years.

Are we looking at a 20-year period of on-again, off-again deflation…of bear market rallies followed by real bear markets…of weak employment and weak or no growth? That’s what we argued, along with Addison Wiggin, in our first book, Financial Reckoning Day. Then, the stock market took off…and the bubble years came. It looked like we were dead wrong. Maybe we were just early. Or maybe those bubble years were just a feint…a fake-out that convinced the entire world to invest in stocks and property, just before the biggest crash in history.

In that book, we guessed that the crash in the tech sector marked the beginning of the end. By 2005, it didn’t seem at all as though we were in a down-cycle. But adjusted for inflation, stocks never beat their January 2000 high. And outside of government, the economy has no more jobs than it did in 1999. We’ve had wars against terror, bubbles in practically every sector, trillion-dollar boondoggles, bailouts, bamboozles and Michael Jackson’s tragic cooling…but what is the only durable thing to come out of the last 10 years? Just Google and debt.