The two worst scourges of humanity in the twentieth century were socialism and fascism. Together, they wrecked much of the world economy because of their shared "fatal conceit" (F.A. Hayek’s term) that government central planners were superior to private property and free markets. Fascist and socialist governments (not that there’s much difference between them) murdered over 100 million of their own citizens, as the sociologist R.J. Rummel has documented (See his book, Death by Government), and instigated wars that caused the deaths of millions more.

Incredibly, the two-party duopoly that has long ruled America has adopted both fascism and socialism as the defining characteristics of our economic system. Call it Fascialism. It is a recipe for national economic suicide.

Economic fascism as practiced by Italy and Germany in the 1920s and ’30s allowed private property and private enterprise to exist, but only if it was strictly controlled and regimented by the state so that it would serve "the public interest" and not private interests. The philosophy of German fascism was expressed in the slogan Gemeinnutz geht vor Eigennutz, which means "the common good comes before the private good." "The Aryan," Hitler wrote in Mein Kampf, "willingly subordinates his own ego to the community and, if the hour demands, even sacrifices it." This sounds a lot like John McCain’s campaign theme of "Country First" (before self-interest), doesn’t it?

The philosophy behind Italian fascism was virtually identical. "The fascist conception of life," Mussolini wrote in Fascism: Doctrines and Institutions, "stresses the importance of the State and accepts the individual only in so far as his interests coincide with the State."

It is remarkable how contemporary economic policy pronouncements are so often identical to those made by early twentieth-century European fascists. Mussolini complained in 1935, for example, that government intervention in the Italian economy was "too diverse, varied contrasting. There has been . . . intervention, case by case, as the need arises." His advisor, Fausto Pitigliani, explained that under fascism government regulation would achieve a certain "unity of aim" instead.

This is exactly how the powers that be in Washington, D.C. have diagnosed the current financial crisis: There’s been too little financial market regulation, they tell us, and it has been too, well, diverse and contrasting. Thus, they have recommended a Super Regulatory Authority that will supposedly regulate, regiment, and control all "systemic risk taking" in the entire economy. The only debate is whether an entirely new agency should be created to achieve this "unity of aim," or if the Fed — which caused the current economic crisis in the first place — should be given the responsibility. 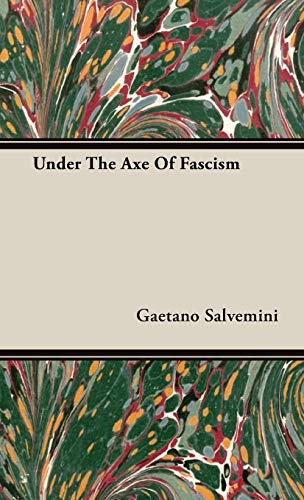 Government-business "partnerships" were a hallmark of both Italian and German fascism. As Ayn Rand once noted, however, in such "partnerships" government is always the "senior partner. " Government-business "collaboration" was supposedly needed in fascist Italy, explained Fausto Pitigliani in his 1934 book, The Italian Corporatist State, because "the principle of private initiative could only be useful in the service of the national interest." It is this "service of the national interest" that is the intended work of the newly appointed "Car Czar" in the Obama administration (along with twenty or so other "czars" so far). It is inevitable that the end product will be the world’s worst cars, endless subsidies and bailouts, and mind-boggling debt piled onto the backs of the taxpayers. All to pay off a campaign debt to the United Autoworkers Union, which bears most of the responsibility for the destruction of General Motors and Chrysler in the first place.

The hallmark of the Obama administration’s economic policy thus far is a forced "partnerships" with dozens of large banks along with General Motors and Chrysler. It is threatening hundreds of other "partnerships" in the name of environmental regulation. And that’s just in the first five months. Mussolini would be envious.

Italian fascism created one gigantic bailout economy. Italian social critic Gaetano Salvemini wrote in his 1936 book, Under the Axe of Fascism, that "It is the state, i.e., the taxpayer, who has become responsible to private enterprise. In Fascist Italy the state pays for the blunders of private enterprise." "Profit remained to private initiative," Salvemini wrote, but "the government added the losses to the taxpayers’ burden. Profit is private and individual. Loss is public and social." Sound familiar?

Mussolini himself boasted in 1934 that "three quarters of the Italian economic system had been subsidized by government," Salvemini wrote. The Obama administration (with a jump start by the Bush administration) is on a path to exceed this level of plunder. In the preface to the 1976 edition of his famous book, The Road to Serfdom, F.A. Hayek wrote (p. xxiii) that when the book was first published in 1944, socialism meant "unambiguously the nationalization of the means of production and the central economic planning which made this necessary." But by the 1970s "socialism has come to mean chiefly the extensive redistribution of incomes through taxation and the institutions of the welfare state." Thus, ever since the 1930s the Democratic Party in America has been the party of socialism, with the Republican Party either providing little or no effective opposition or, as with the administration of President George W. Bush, serving as accomplices. The Bush administration vastly expanded the welfare state, while Obama intends to expand it much faster, especially if he succeeds in implementing health care socialism and imposing even more punitive levels of income taxation on the most productive citizens.

Obama promises the worst of all economic worlds: A vast expansion of the welfare state form of socialism, as defined by Hayek, along with a heavy dose of old-fashioned, early twentieth-century, Stalinist socialism with the nationalization of banks, automobile companies, the health care industries, and whatever else he can get away with. The Mussolini-like cult of personality that has developed around him will facilitate this disastrous path to national economic suicide.

Want More Energy, Better Sleep, a Clearer Mind? It May be Time to Clean Your Organs Confronting the CIA's Maze of Evil