The Little Flower and the Black Rose 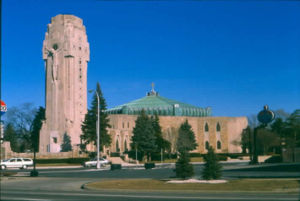 Over the intersection of Woodward Avenue and Twelve Mile Road, in retro-hip but foreclosure-riddled Royal Oak, Michigan, looms the Charity Crucifixion Tower of the National Shrine of the Little Flower. Father Charles E. Coughlin commissioned the 90-foot landmark in 1928, three years after founding the parish, in response to a cross burning by the Ku Klux Klan, then active in nearby Berkley. The church is one of the first in the world dedicated to St. Therese of Lisieux, the Little Flower, whose "Little Way" of spirituality has been a source of inspiration to millions.

Shrine's patroness was born Marie-Françoise-Therese Martin in 1873 in Alençon, France, the youngest of Louis and Zelie (Guerin) Martin's five children, all daughters, who survived to adulthood. The family moved to Lisieux in 1877, after her mother's death. Loss, illness and wild emotions beset Therese throughout her short life, but her simple philosophy of love of neighbor and abandonment to God never faltered.

She entered a Carmelite convent at the age of 15. Craving sainthood, she knew her impending life of poverty and obedience would preclude heroic works:

Love proves itself by deeds, so how am I to show my love? Great deeds are forbidden me. The only way I can prove my love is by scattering flowers and these flowers are every little sacrifice, every glance and word, and the doing of the least actions for love.

Therese took every opportunity to sacrifice while living among the Carmelites. She was gracious with those in the community who treated her shabbily. She ate the worst leftovers without complaining. She once took responsibility for a broken vase that was not her doing. Therese's autobiography, Story of a Soul, illustrates the virtue of these and other small and unrecognized acts of charity.

Without justice, what are kingdoms but great robber bands? What are robber bands but small kingdoms? The band is itself made up of men, is ruled by the command of a leader, and is held together by a social pact. Plunder is divided in accordance with an agreed upon law. If this evil increases by the inclusion of dissolute men to the extent that it takes over territory, establishes headquarters, occupies cities, and subdues peoples, it publicly assumes the title of kingdom!

A fitting and true response was once given to Alexander the Great by an apprehended pirate. When asked by the king what he thought he was doing by infesting the sea, he replied with noble insolence, “What do you think you are doing by infesting the whole world? Because I do it with one puny boat, I am called a pirate; because you do it with a great fleet, you are called an emperor.”

One wonders what sneering contempt the apprehended pirate might direct at our modern day Emperor; for when it comes to "infesting the whole world," not even an enthusiastic cosmopolitan like Alexander the Great can hold a candle to the President of the United States. POTUS, with his 575,000 troops and 700 military bases in 130 countries encircling the globe, truly bestrides the whole world like a colossus. Neither considerations of Judeo-Christian morality, Constitutional constraint nor simple human decency impinge on POTUS' maniacal quest for Full Spectrum Dominance. POTUS alone has used nuclear weapons on civilian populations. POTUS kidnaps and tortures. POTUS detains without charges. POTUS' interminable military adventures have killed, maimed or left homeless millions. Irony is lost on POTUS. POTUS now presumes to wage war on terrorism.

Universality is the hallmark of morality. But POTUS holds universality in contempt, even while paying lip service to morality. If POTUS' empire "creates its own reality," it necessarily creates its own morality. The double standards ensue. As Joseph Sobran once noted: "Americans who think America should behave like other countries are u2018isolationists,' whereas other countries that behave like the U.S. are u2018rogue nations.'" To be sure, when any other nation's leader acts like POTUS, POTUS acts horrified.

Unlike Augustine, Therese never wrote anything political in her life. Dying of tuberculosis at 24, she promised she'd spend her "heaven doing good on earth." With POTUS inflicting so much death and destruction on earth, might not the "shower of roses" she promised to let fall after her death entail something beyond small favors granted her petitioners? Might it not include a sign imparting the wisdom of the bold passage authored by her fellow Doctor of the Church above – a wake-up call to a people hopelessly adrift in a culture bereft of its moorings? Finally, might this sign not manifest itself somewhere in or on that beautiful Royal Oak church dedicated to her memory?

The National Shrine of the Little Flower is constructed of limestone and granite from Indiana and Massachusetts, with randomly placed stones from various U.S. states and territories. State and territory names and flowers are carved into these stones to honor the men and women from around the country who helped build the church through their donations. The picture below shows the south wall of the church, facing 12 Mile Road, with the limestone and granite and several state stones in view:

One of the stones interspersed among the others in this wall, not surprisingly, is Michigan's. You can see the state flower, the apple blossom, in the close-up below.

Likewise for New Jersey, the meadow violet is engraved in the stone.

Finally, one stone in this wall appears singularly vulnerable to the ravages of dust and soot. Maybe something in its composition binds to automobile exhaust. This sullied stone is located to the left of the double doors, about seven feet off the ground. You have to walk up to it and examine it closely to make out its name.

The word running from the upper left corner down to the lower is "District." You'll have to take my word for it. Maybe you can make out "of Columbia" across the top. The district flower, the American Beauty Rose, blackened as with the sins of a "great fleet," appears on the surface.

What do you think? A question that has troubled humans from time immemorial is whether various phenomena of apparent moral or metaphysical significance have arisen by randomness (i.e., they aren't signs) or design (i.e., they are signs). I don't want to read too much into this.

Special thanks to sixth grade Shrine Elementary School student Lena Kaylyn Pivetta for her photographic contributions (all pictures except the first, which comes from Wikipedia) to this essay.

The Best of Tony Pivetta