The Communists Meant Well, You Dope

All you primitive folks who think communism was evil, tsk tsk! The communists meant well!

The former political director of a state-level chapter of the Libertarian Party, which has since been recaptured by normal people, wrote this: 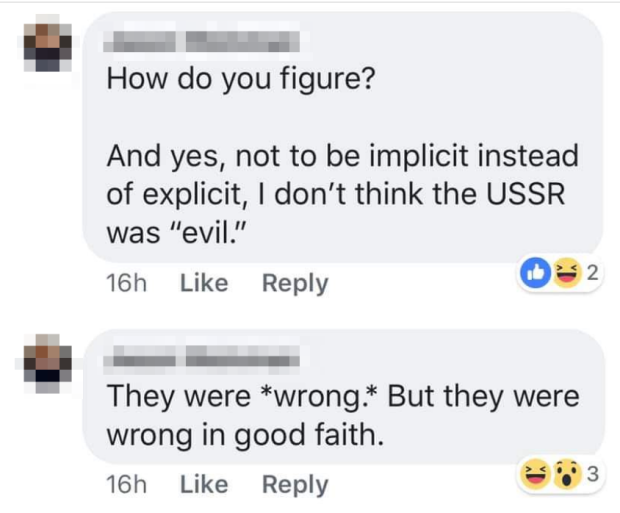 Someone in my Supporting Listeners group came back with this retort:

That comment alone kills him, but I can’t resist a few swings of my own rhetorical baseball bat.

Our friend’s thesis: the USSR was not evil, but simply wrong in good faith.

Now note: this same person considers your host here to be flat-out evil.

You’ve got to believe me, folks: I’m genuinely trying not to be evil. After all, here are my totals:

Woods, says our friend, is evil, “racist,” “white supremacist” (yes, he has even said this, so we may well be dealing with outright mental illness here), and “neo-Confederate.”

But the USSR? Why, they were “wrong in good faith”!

(Aleksandr Solzhenitsyn had a bit to say about the nature of the Soviet regime, I might add, but something tells me this person would consider Solzhenitsyn, rather than his captors, to be the evil one.)

They just wanted to improve conditions for the working class, you see. Sure, they went about it the wrong way, but their motives were pure.

Do you detect a slight — slight, I say — naivete there?

The Bolshevik Revolution gave rise almost instantly to a one-party state with suppression of dissent, summary executions, concentration camps (with some 70,000 inmates by the time of Lenin’s death in early 1924), a concerted state campaign against religion, terror against the countryside — and on and on.

Not to mention a secret police sixteen times as large as anything the tsar had ever built.

And that’s not to mention the far worse atrocities that came later.

Hey, Ukrainians, we’re carrying out collectivization in a way that’s bound to starve millions of you to death, but honey, don’t you dare forget that our hearts are in the right place. Smooch!

Read Harvest of Sorrow by Robert Conquest, and see what was done to those people. Then consider that an outspoken so-called libertarian, who accuses the whole world of fascism and “white supremacy” (a term that to my mind instantly discredits its user), thinks this was not an evil regime.

This is the great moral exemplar who presumes to lecture the libertarian movement.

This is the same person who said it would be a “huge stretch” to call Murray Rothbard an Austrian School economist. (I’ll bet Murray Rothbard, too, is to be considered more evil than the USSR.)

Whose price theory, production theory, interest theory, business-cycle theory, and monetary theory did Rothbard hold and promote, if not the Austrian?

Not to mention: Henry Hazlitt himself matter-of-factly described Rothbard as a member of the Austrian School, and one who in fact failed to appreciate his own significance.

Hayek, too, said Rothbard was clearly working in the Austrian tradition, as did Mises.

So we are dealing with a special kind of dumb here — or someone more brilliant than Hazlitt, Hayek, and Mises. (I don’t know about you, but I’m going with Option 1.)

In the meantime, inside the Tom Woods Show Elite we have a special slicer we use on arguments and claims like these — namely, the collective intelligence of the amazing folks inside.

The wickedness of communist regimes shouldn’t be a controversial issue among libertarians, now should it?

Be a part of my Elite — to contribute, yes, but also to learn from and enjoy.

Let’s rebuild a sane libertarianism, one member at a time.

I look forward to greeting you: