“It’s possible to have more than one reserve currency.”

These are the recent words of Jerome Powell, the Chairman of the Federal Reserve.

It was a stunning admission from the one person with the most control over the US dollar—the world’s reserve currency.

Reading between the lines, Powell’s remarks are a strong hint that the current international monetary system based on the US dollar is on its way out… and soon.

Even the elites running this 50+ year old system can’t go along with the farce of maintaining it anymore.

That conclusion is not surprising; it’s the logical outcome once you put the pieces together to see the Big Picture. However, what is notable is the change in tone. For the first time, the financial establishment is now talking like this out in the open. That tells me a big change could be imminent.

Although the elites would prefer to continue milking the current system, they realize it’s failing and the need to bridge the gap to a new system they hope to control.

Nobody knows what the next international monetary system will look like—not even the elites. However, they know what they want it to look like and are working hard to shape that outcome.

The current monetary paradigm is ending, and we will enter a new one as the elites attempt to “reset” the system.

This is the elites’ desired outcome.

Unfortunately, the pieces of such a system are already being put into place. The idea is to get it ready, so they can try to implement it when the current monetary system collapses—which could happen much sooner than most realize.

It marked one of the most significant events in US history—on par with the 1929 stock market crash, JFK’s assassination, and the 9/11 attacks.

Yet, most people know nothing about it…

It’s been over 50 years since that fateful day forever transformed America and the world. Here’s what happened.

It’s been rightly said that “he who holds the gold makes the rules.”

After World War 2, the US had the largest gold reserves in the world, by far. Along with winning the war, this let the US reconstruct the global monetary system around the dollar.

The new system, created at the Bretton Woods Conference in 1944, tied the currencies of virtually every country in the world to the US dollar through a fixed exchange rate. It also tied the US dollar to gold at a fixed rate of $35 per ounce.

The dollar was said to be “as good as gold.”

The Bretton Woods system made the US dollar the world’s premier reserve currency. It forced other countries to store dollars for international trade or to exchange with the US government for gold.

However, it was doomed to fail.

Runaway spending on warfare and welfare caused the US government to print more dollars than it could back with gold at the promised price.

By the late 1960s, the number of dollars circulating had drastically increased relative to the amount of gold backing them. This encouraged foreign countries to exchange their dollars for gold, draining the US gold supply at an alarming rate.

The situation pressured the US government to make a drastic decision. It could either do nothing and watch its gold holdings evaporate, which would mean losing enormous financial and geopolitical power. Or it could default on its promise to redeem the dollar for gold.

On Sunday night, August 15, 1971, President Nixon interrupted the scheduled TV programs and made a surprise announcement to the nation—and the world.

Nixon said he was temporarily suspending the dollar’s convertibility into gold.

The most apparent lie was Nixon’s claim that the suspension would only be “temporary.” It’s still in place today.

Another egregious lie was that his move was necessary to protect Americans from international speculators. Instead, money printing to finance out-of-control government spending was the real problem.

Lastly, Nixon said removing the link to gold would stabilize the dollar. However, even by the government’s own rigged inflation statistics, which understate reality, the US dollar has lost over 86% of its purchasing power since 1971.

The truth is that Nixon defaulted on the obligation to redeem the dollar for gold at $35 an ounce. Since then, the dollar has been a pure fiat currency with no backing.

August 15, 1971, was the official start of the age of fiat. The world went on a fiat currency standard for the first time in human history.

It gave the US government an unfathomable amount of power.

Having the US dollar as the world’s premier reserve currency—without gold backing—allowed Washington to print fake money out of thin air and export it to the rest of the world for real goods and services—a privileged racket no other country has.

Without gold to hold it in check, the Fed could print as many dollars as it wanted. And that’s exactly what happened.

The following chart shows the explosion in the US money supply since the dawn of the fiat age in 1971. 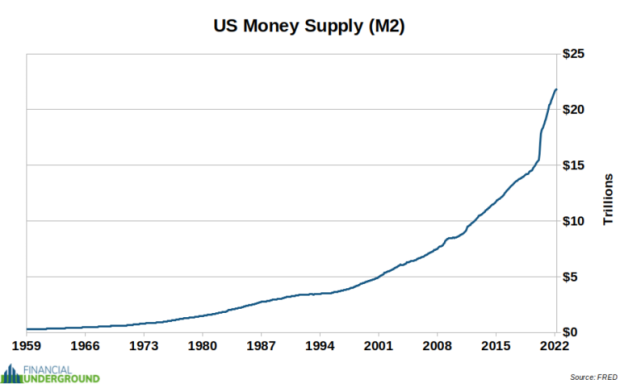 1971 was an enormous change in money and finance.

That’s because, before the adoption of a fiat currency standard, gold had been mankind’s most enduring form of money—for over 2,500 years—because of unique characteristics that make it suitable to store and exchange value.

Gold is durable, divisible, consistent, convenient, scarce, and most importantly, the “hardest” of all physical commodities.

In other words, gold is the one physical commodity that is the “hardest to produce” (relative to existing stockpiles) and, therefore, the most resistant to inflation.

Gold is indestructible, and its stockpiles have built up over thousands of years. That’s a big reason why the annual growth of new gold supply—typically 1-2% per year—is insignificant.

In other words, nobody can arbitrarily inflate the supply. That makes gold an excellent store of value and gives the yellow metal its superior monetary properties.

People in every country of the world value gold. Its worth doesn’t depend on any government or any counterparty at all. Gold has always been an inherently international and politically neutral asset. This is why different civilizations around the world have used gold as money for millennia.

Yet, most people don’t understand this.

They might say the paper dollars in their wallets and the digital dollars in their bank accounts are money, not gold. But that’s only been the case since 1971, a drop in the bucket by historical terms.

However, that’s all about to change—and soon. That’s because the fiat system is self-destructing at an alarming rate. After more than 50 years, it’s long past the end of its shelf-life, like a carton of spoiled milk.

The current monetary system is on its way out. Even the central bankers running the system can see that. So they are preparing for what comes next as they attempt to “reset” the system.

I suspect it could all go down soon… and it’s not going to be pretty for most people.