Editor’s Note: Below is part 1 of David Stockman’s article on the “climate crisis” and why governments are the real cause of the current economic issues.

“The Chief of the European Central Bank (ECB) has said that climate change is behind soaring inflation, stating that droughts and famines are driving up prices.

“If more and more climate disasters, droughts, and famines occur throughout the world, there will be repercussions on prices, on insurance premiums, and on the financial sector,” Lagarde said.

No, what we actually need to take into account is that the so-called Climate Crisis is complete hogwash, starting with the basics of so-called man-made global warming. The fact is, the present era is one of the coolest and least carbon-intensive periods of the last 600 million years.

Stated differently, the true science makes mincemeat of the elitist narrative espoused by Lagarde, officialdom through Europe and North America and the mainstream media. Yet it is now being used as an excuse for the unfolding economic disasters caused by the central banks and the Warfare State and a pretext for new rounds of authoritarian suppression of economic liberty exemplified by California’s recent move to outlaw combustion engine autos after 2035.

Indeed, the geological and paleontological evidence overwhelmingly says that today’s average global temperature of about 15 degrees C and CO2 concentrations of 420 ppm are nothing to fret about, and even if they rise to about 17-18 degrees C and 500-600 ppms by the end of the century, it may well on balance improve the lot of mankind.

After all, bursts of civilization during the last 10,000 years uniformly occurred during the red portion of the graph below–the river civilizations, the Minoan, the Greco-Roman era, the Medieval flowering and the industrial and technological revolutions of the present era. At the same time, the several lapses into dark ages happened when the climate turned colder (blue area).

And that’s only logical. When its warmer and wetter, growing seasons are longer and crop yields are better—regardless of the agricultural technology and practices of the moment. And it’s better for human and community health, too—most of the deadly plagues of history have occurred under colder climes, such as the Black Death of 1344-1350.

Yet the Climate Crisis Narrative shitcans this massive body of “the science” by means of two deceptive devices that invalidate the entire Anthropogenic Global Warming (AGW) story.

First, it ignores the entirety of the planet’s pre-Holocene (last 10,000 years) history, even though the science shows that more than 50% of the time in the last 600 million years global temperatures were in the range of 25 degrees C or 67% higher than current levels and far beyond anything projected by the most unhinged climate models today. But, crucially, at those temperature peaks planetary climate systems did not go into a doomsday loop of scorching meltdown—warming was always checked and reversed by powerful counter-veiling forces.

Even the history the alarmist do acknowledge has been grotesquely falsified. We are referring to the so-called “hockey stick” of the past 1000 years, which Al Gore made famous in his propaganda flick about global warming, which purports to show that temperatures were flat until 1850 and are now rising to allegedly dangerous levels.

But that’s a complete crock. It was fraudulently manufactured by the IPCC (International Panel on Climate Change) to “cancel” the fact that temperatures in the pre-industrial world of the Medieval Warm Period (1000-1200 AD) were actually higher than at present!

Secondly, it is falsely claimed that global warming is a one-way street in which rising concentrations of greenhouse cases (GHGs) and especially CO2 is causing the earth’s heat balance to continuously increase. The truth, however, is that higher CO2 concentrations are a consequence and by-product, not a driver and cause, of the current naturally rising temperatures.

Again, the now “canceled” history of the planet knocks the CO2-driver proposition into a cocked hat. During the Cretaceous Period between 145 and 66 million year ago a natural experiment provided complete absolution for the vilified CO2 molecule. During that period, global temperatures rose dramatically from 17 degrees C to 25 degrees C—a level far above anything today’s Climate Howlers have ever projected.

Alas, CO2 wasn’t the culprit. According to the science, ambient CO2 concentrations actually tumbled during that 80 million years expanse, dropping from 2,000 ppm to 900 ppm on the eve of the Extinction Event 66 million years ago.

You would think that this powerful countervailing fact would give the CO2 witch-hunters pause, but that would be to ignore what the whole climate change brouhaha is actually about. That is, it’s not about science, human health and well being or the survival of planet earth; it’s about politics and the ceaseless search of the political class and the apparatchiks and racketeers who inhabit the Washington beltway for still another excuse to aggrandize state power.

Indeed, the Climate Change Narrative is the kind of ritualized policy mantra that is concocted over and again by the political class and the permanent nomenklatura of the modern state—professors, think tankers, lobbyists, career apparatchiks, officialdom—in order to gather and exercise state power.

To paraphrase the great Randolph Bourne, inventing purported failings of capitalism—such as a propensity to burn too much hydrocarbon—is the health of the state. Indeed, fabrication of false problems and threats that purportedly can only be solved by heavy-handed state intervention has become the modus operandi of a political class that has usurped near complete control of modern democracy.

So doing, however, the ruling elites have gotten used to such unimpeded success that they have become sloppy, superficial, careless and dishonest. For instance, the minute we get an ordinary summer heat wave of the kind Christine Lagarde was yapping about, these natural weather events are jammed into the global warming narrative with nary a second thought by the lip-syncing journalists of the MSM.

Yet there is absolutely no scientific basis for all this tom-tom beating. In fact, NOAA publishes a heat wave index based on extended temperature spikes which last more than 4 days and which would be expected to occur once every ten years based on the historical data.

As is evident from the chart below, the only true heat wave spikes we have had in the last 125 years were during the dust bowl heat waves of the 1930s. The frequency of mini-heat wave spikes since 1960 is actually no greater than it was during the 1895-1935 period. 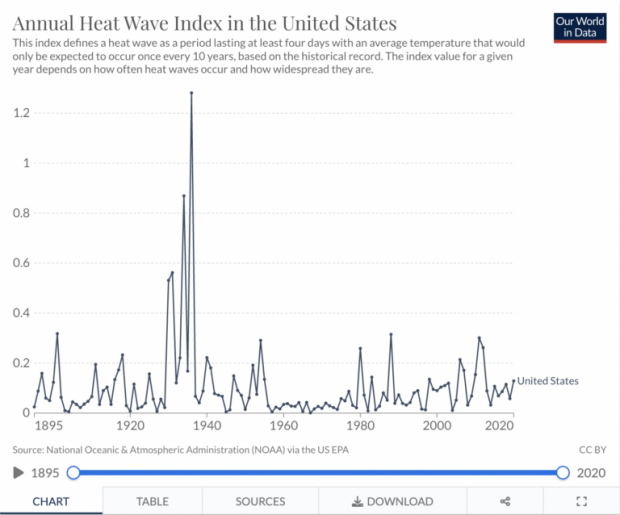 Likewise, all it takes is a good Cat 2 hurricane and they are off to the races, gumming loudly about AGW (Anthropogenic Global Warming). Of course, this ignores entirely NOAA’s own data as summarized in what is known as the ACE (accumulated cyclone energy) index.

This index was first developed by the renowned hurricane expert and Colorado State University professor, William Gray. It uses a calculation of a tropical cyclone’s maximum sustained winds every six hours. The latter is then multiplied by itself to get the index value and accumulated for all storms for all regions to get an index value for each year as shown above.

This chart covers the past 170 years, where the red line is the annual figure and the blue line represents the seven-year rolling average.

Your editor has an especial regard for the expertise of William Gray. Back in our private equity days we invested in a Property-Cat company, which was in the super-hazardous business of insuring against the extreme layers of damage caused by very bad hurricanes and earthquakes. So setting the premiums correctly was no trifling business and it was the analytics, long-term data bases and current year forecasts of Professor Gray upon which our underwriters crucially depended.

That is to say, hundreds of billions of insurance cover was then and still is being written with ACE as a crucial input. 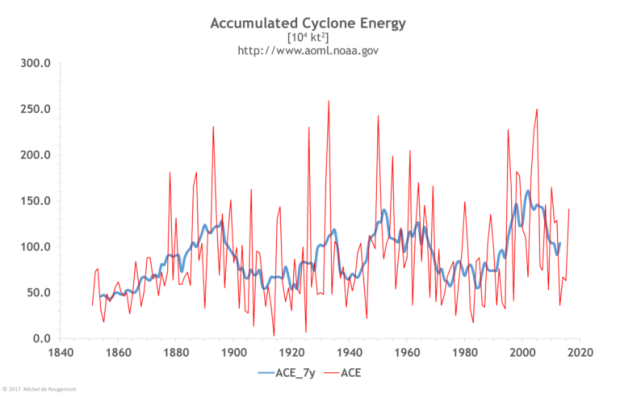 The above is an aggregate index of all storms and is therefore as comprehensive a measure as exists.

But for want of doubt, the next three panels look at hurricane data at the individual storm count level. The pink portion of the bars represent the number of big Cat 3-5 storms, while the red portion reflects the number of Cat 1-2 storms and the blue the number of tropical storms that did not reach Cat 1 intensity. 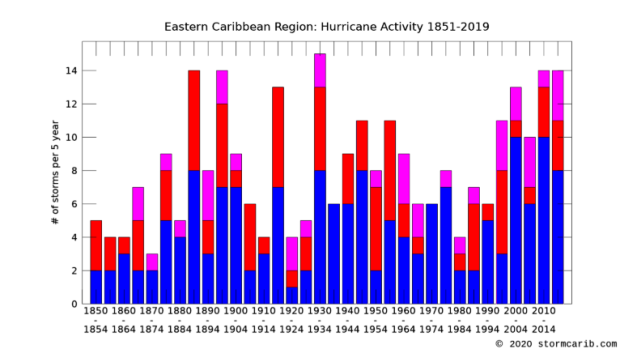 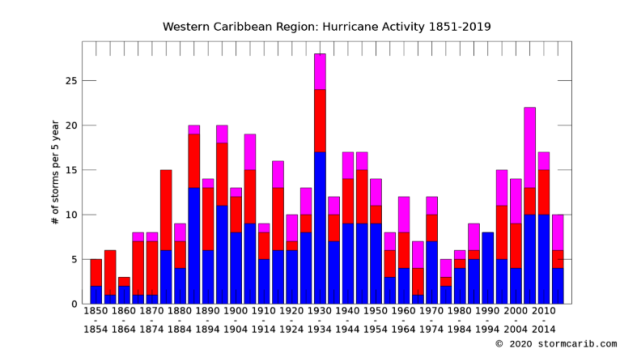 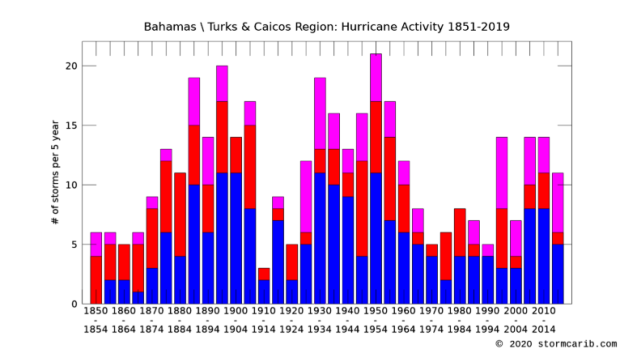 The bars accumulate the number of storms in 5-year intervals and reflect recorded activity back to 1851. The reason we present three panels—for the Eastern Caribbean, Western Caribbean and Bahamas/Turks & Caicos, respectively, is that the trends in these three sub-regions clearly diverge. And that’s the smoking gun.

If global warming were generating more hurricanes as the MSM constantly maintains, the increase would be uniform across all of these sub-regions, but it’s clearly not.

The actual truth of the matter is that Atlantic hurricane activity is generated by atmospheric and ocean temperature conditions in the eastern Atlantic and North Africa. Those forces, in turn, are heavily influenced by the presence of an El Nino or La Nina in the Pacific Ocean.

El Niño events increase the wind shear over the Atlantic, producing a less-favorable environment for hurricane formation and decreasing tropical storm activity in the Atlantic basin. Conversely, La Niña causes an increase in hurricane activity due to a decrease in wind shear.

These Pacific Ocean events, of course, have never been correlated with the low level of natural global warming now underway.

The number and strength of Atlantic hurricanes may also undergo a 50–70 year cycle known as the Atlantic Multidecadal Oscillation. Again, these cycles are unrelated to global warming trends since 1850.

Moreover, like in all else the very long term records of storm activity also rule out AGW because there was none for most of the time during the last 3,000 years, for instance. Yet according to a proxy record for that period from a coastal lake on Cape Cod, hurricane activity has increased significantly during the last 500-1,000 years—long before industrialization and fossil fuel burning— compared to earlier periods.

In short, there is no reason to believe that these well understood precursor conditions and longer-term trends have been impacted by the modest increase in average global temperatures since the LIA (Little Ice Age) ended in 1850.