The video above features a lecture I gave during the 2022 Mid-Cape Summer Fest to celebrate our 25th anniversary. In it, I review strategies to help maintain your health during what I believe may become very distressing and difficult times.

The Great Reset is bringing with it supply chain disruptions, food and energy shortages, economic collapse and global totalitarianism. Additional bioweapon releases are also possible, as are cyberwarfare attacks.

A sensible person will look at current signs and take precautions, and one of the best things you can do right now is to focus on your health, to give yourself a fighting chance to make it through these dark and potentially dangerous times.

Your Mitochondrial Health Is Paramount

During this energy production, the mitochondria produce a small amount of reactive oxygen species (ROS), which cause oxidative damage. If the oxidative stress is severe, mitochondrial dysfunction and energy failure can occur, which in turn can lead to fatigue and chronic diseases. Three of the most damaging factors, in terms of mitochondrial function are:

By addressing these three factors, you can significantly reduce oxidative stress and improve your mitochondrial function.

Most Adults Have High Iron Levels

Contrary to popular belief, most men and postmenopausal women have high iron levels. One reason for this is that many processed foods are fortified with iron (most actually contain dangerous forms of iron, like iron fillings). Another reason is the fact that your body has no pathway to eliminate iron other than blood loss.

Stored iron in your tissues is incredibly damaging to your health as it promotes oxidative stress that can damage your mitochondrial DNA, cell membranes and electron transport proteins. If left untreated, it can damage your organs and contribute to cancer, heart disease, diabetes, neurodegenerative diseases and many other disorders.

It’s also one of the most common causes of fatigue because of how it impairs your mitochondrial production of energy. Iron has a terminal destination in the mitochondria from where it must be recycled. However, for that to occur, you must have enough copper and retinol, and most people simply don’t. As a result, the iron gets “stuck” and cannot be recycled.

So, a low ferritin level is not necessarily a sign that you need iron. You more than likely already have too much stored in your tissues that are simply unavailable due to low availability of copper, which in turn is typically the result of retinol deficiency.

The average person accumulates about 1 milligram of iron a day, and if it’s not being recycled due to a copper deficiency, you end up in a vicious cycle. You may be told you low iron and need iron supplementation, but the problem is really a copper deficiency. So, you keep loading in iron, and your health suffers as a result.

As I explain in the lecture, your mitochondria do require iron to function, but the problem most people have is that their stored iron is far too high, which basically short-circuits the mitochondria. Additionally, iron combines with hydrogen peroxide in a process called Fenton’s Reaction, which creates very potent oxidizing agents that damage to your stem cells, cell membranes, DNA, proteins and mitochondria.

Studies have linked excess iron to inflammatory conditions such as atherosclerosis, and people who donate blood on a regular basis tend to live longer, as they have lower oxidative stress.

Bill Sardi has confused some people into believing that phytic acid, or IP6, can be useful for lowering iron levels. Let me caution you that this is actually a worse than worthless intervention. I tried his recommendation over 30 years ago for my father who had hemochromatosis and it did absolutely nothing. The ONLY intervention that lowers iron is removal of blood. Additionally, IP6 is a nonspecific mineral chelator and will remove beneficial minerals and cause you harm.

How to Address High Iron Levels

There are several tests that can help you determine your stored iron level:

•The serum ferritin test — This test measures stored iron that has seeped out into your blood (but it doesn’t indicate tissue iron stores). I recommend all adults to get this test done on an annual basis.

Ideally, your serum ferritin should be between 20 and 35 ng/mL. If your ferritin level is above 80 ng/mL, the solution is to donate your blood. If it’s over 200 ng/mL, a more aggressive phlebotomy schedule is recommended.

Beware, however, that serum ferritin can register as falsely elevated if you have an active infection or high amounts of inflammation. You can use a C-reactive protein (CRP) test to determine if this is the case. If your CRP is normal, inflammation is not the cause of your elevated serum ferritin

The answer, if you have high iron, is to donate blood on a regular basis. If donating a full pint (half a liter, 500 ml or about 8 ounces) of blood three to four times a year is problematic, you can remove blood in smaller amounts once a month on the schedule listed below. If you have congestive heart failure or severe COPD, you should discuss this with your doctor, but otherwise this is a fairly appropriate recommendation for most.

I personally remove 60 cc or two ounces of blood once a week, which is about 7 pints per year. This is a large amount but because it is done slowly it is far better tolerated.

Why Opt for Sun Exposure Rather Than Supplements?

Sun exposure triggers vitamin D production in your skin, but that’s not all it does. The fact that sun exposure has many other health benefits is perhaps one of the top reasons for not relying on supplements, because in addition to vitamin D, you’d also have to take several others just to obtain what you can get for free from the sun.

One of the most important benefits of sun exposure besides vitamin D is melatonin production. The near-infrared wavelengths in sunlight actually catalyze the production of melatonin — a powerful endogenous antioxidant — in your mitochondria. This is important, as that’s where the melatonin is needed the most.

Sun exposure also produces nitric oxide, which helps lower your blood pressure, and structures the water in your body. It also activates vitamin A (retinol), forming active metabolites called retinoids, and optimizes serotonin production for improved mental health. It basically acts as an antidepressant, which is why it is so important to treat SAD in the winter months.

Ideally, get one hour of sun exposure every day around solar noon (between 11.30 a.m. and 2.30 p.m. if you are in daylight saving time), while wearing as little clothing as possible and no sunscreen. It is important to build up to one hour slowly if you haven’t had much sun exposure.

You should never get burned. However, excess LA in your diet is actually the largest contributor to sunburn and skin cancer — not sun exposure itself. So, you can radically reduce your risk of sunburn by drastically reducing your LA intake.

Since I moved to Florida more than a decade ago, I’ve not needed to take oral vitamin D, as I take an hour-long daily walk, around solar noon, wearing nothing but shorts and a baseball cap.

Three Key Remedies to Keep in Your Emergency Kit

I recently published an interview with Dr. Russel Reiter, who has published an astonishing 1,600 scientific papers on melatonin. That discussion made me realize just how valuable melatonin can be during an acute heart attack or stroke.

As explained by Reiter in that interview, during cardiac arrest or stroke, the blood supply is temporarily interrupted to your heart or brain. This deprives the tissues of oxygen, and without oxygen, they rapidly deteriorate. When the blood vessel reopens, which is called reperfusion, and oxygen flows back into those oxygen-deprived cells, severe damage can occur, as loads of free radicals are generated once the blood starts flowing again.

High-dose melatonin, if taken soon enough after a heart attack or stroke, can help preserve these tissues and reduce their tissue damage. While the ideal dosage is uncertain, Reiter says he would not hesitate to take anywhere from 50 milligrams to 100 mg of melatonin, ideally intravenously if paramedics are on the scene, or sublingually if no professional medical help is around.

Melatonin has no toxicity, so it’s safe to take even at high doses. It may interfere with your sleep cycle, but that’s a small price to pay to salvage your heart or brain in an acute health emergency.

Another emergency kit essential is methylene blue. It’s a primary antidote for metabolic poisons (any poison that interferes with oxygen transport or displaces oxygen, either from the blood or from the mitochondria), such as carbon monoxide or cyanide poisoning. By improving mitochondrial respiration and brain energy metabolism, it can also help protect your heart and brain during an acute heart attack or stroke.

To learn more about this useful remedy, see my interview with Francisco Gonzalez-Lima, Ph.D., who is one of the foremost experts on methylene blue, featured in “The Surprising Health Benefits of Methylene Blue.”

The third remedy to keep on hand at all times is a jet nebulizer and food grade 3% hydrogen peroxide. Nebulized peroxide is a simple, inexpensive and incredibly effective way to kill viruses, improve oxygenation and optimize your redox pathways. For more details, see “Nebulized Peroxide — Immune Support for Respiratory Viruses.”

How to Improve Your Metabolic Health

The vast majority of Americans are metabolically unhealthy; they are insulin resistant, which sets them up for obesity and just about all chronic diseases. Two key strategies that will improve your metabolic health include:

•Time-restricted eating (TRE) — This is a form of intermittent fasting where you eat all your meals within a six- to eight-hour window, and fasting for the remaining 16 to 18 hours each day.

Be sure to eat your last meal at least three hours before bed. An estimated 90% of Americans spread their meals and snacks across 12 hours or more, which is a recipe for metabolic disaster. Your body simply wasn’t designed to eat continuously.

•Eliminating linoleic acid (LA) from your diet — I’m convinced most insulin resistance is caused by excess omega-6 fat in the diet, not sugar, and the majority of the omega-6 is in the form of linoleic acid (LA).

LA creates loads of oxidative stress — it basically acts as a metabolic poison — so eliminating it from your diet can go a long way toward improving your mitochondrial function. It’s called an essential fat, but it’s in so many foods, it’s basically impossible to become deficient if you eat regular food. Most get FAR too much — dangerous amounts — as processed foods are chockful of seed oils.

The best way to ensure your LA intake is within the safe range is to use a nutritional calculator such as Cronometer. Once you’ve entered the food for the day, go to the “Lipid” section on the lower left side of the Cronometer app. To find out how much LA is in your diet for that day, just note how many grams of omega-6 is present. About 90% of the omega-6 you eat is LA.

Industrial seed oils or vegetable oils (those listed in red below) are a primary source of LA, but even food sources hailed for their health benefits contain it, such as olive oil and conventionally raised chicken and pork, both of which are fed LA-rich grains. To avoid these harmful oils: 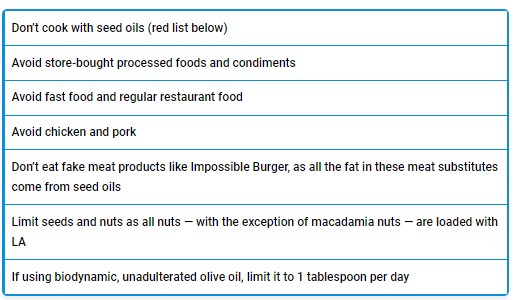 For cooking, use the oils in green in the chart below. 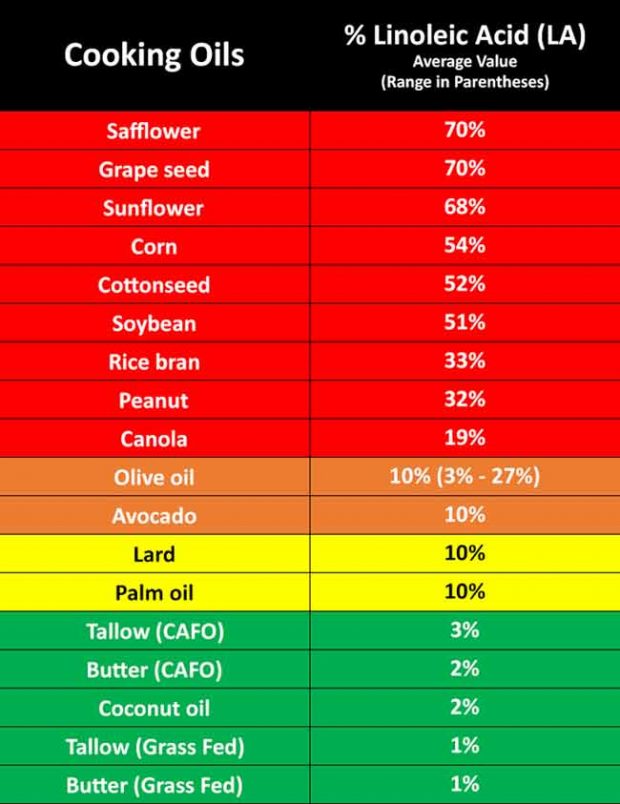