A Key Food to Grow With Limited Space

As a cabal of technocratic elite battle for control of the world’s resources, global systems of food and energy production are being increasingly targeted and dismantled. This is all part of The Great Reset, a decades-old plan from the World Economic Forum (WEF) to seize control of wealth and resources.

It’s becoming increasingly clear that severe food shortages are coming and appear to be inevitable, more or less worldwide. Further, whatever food is available will continue to go up in price. That’s why now is a crucial time to learn new methods of self-sufficiency and resiliency. I describe them as “new” methods, but many of them are actually not new at all and could more aptly be described as “old-fashioned.”

One such method — growing your own food — is something I encourage virtually everyone to take part in. Even if you have limited space, it’s possible to grow quite a bit of food to feed yourself and your family. One food that requires very minimal space, yet packs a powerful nutritional punch, is sprouts.

Recently, I’ve embraced some of the components of a nose-to-tail carnivore diet as highlighted by Dr. Paul Saladino.1 One premise is that the notion that all plant foods are beneficial may need to be revisited and revised. For instance, plant lectins can have harmful effects by binding to specific receptor sites on your intestinal mucosal cells and interfering with the absorption of nutrients across your intestinal wall.2

However, sprouts and microgreens offer unique benefits due to the fact that they’re in their initial and early phase of growth. During this time, the plants contain more concentrated amounts of nutrients, making them far more nutrient-dense than their full-grown vegetable counterparts, providing higher amounts of vitamins, minerals, antioxidants and health-promoting phytochemicals.

As a result, you need to eat far less, in terms of amount, compared to a mature plant. Another benefit is that sprouts can also contain up to 100 times more enzymes than their full-grown counterparts, which allows your body to extract higher levels of vitamins, minerals and other nutrients from other foods, and help protect against chemical carcinogens.3

In fact, writing in Proceedings of the National Academy of Sciences, researchers explained, “Small quantities of crucifer sprouts may protect against the risk of cancer as effectively as much larger quantities of mature vegetables of the same variety.”4 When sprouting seeds, nuts, beans and grains you get:

Another important benefit — sprouting makes nuts, grains and seeds more digestible by breaking down antinutrients, enzyme inhibitors and lectins that can make the full-grown food hard to digest.7 Writing in the journal Plants, researchers from the World Vegetable Center in Taiwan explained:8

“With society’s growing interest in healthy eating and lifestyles, e.g., the Slow Food movement and the promotion of novel and superfoods, the interest in fresh, ready-to-eat functional and nutraceutical food has been on the rise in recent decades. In this context, microscale vegetables, i.e., sprouted seeds and microgreens, are becoming increasingly popular worldwide as fresh, ready-to-eat functional and nutraceutical food.

They have great potential to diversify and enhance the human diet and address nutrient deficiencies due to their high content of phytochemicals … Ancient Egyptians have already practiced sprouting seeds around 3000 B.C.

During the germination process, the amount of antinutritive compounds (trypsin inhibitor, phytic acid, pentosan, tannin, and cyanides) decreases, while palatability and nutrient bioavailability, as well as the content of health-related phytochemicals (glucosinolates and natural antioxidants), are enhanced.”

The many beneficial compounds found in edible plant sprouts, such as alfalfa, sunflower and broccoli, include:9

Red cabbage and broccoli sprouts, in particular, are a rich source of glucosinolates, which have anticancer, effects.10 When compared to either broccoli or cauliflower, 3-day-old broccoli sprouts contain anywhere from 10 to 100 times higher levels of glucoraphanin.11

Together, the powerful compounds in sprouts exert a number of favorable effects on human health, such as the following activities:12

My two favorite sprout varieties are pea and sunflower sprouts. They provide some of the highest quality plant protein you can eat and make a perfect complement to fermented vegetables. In short, sprouts provide the essentials of nutrition very inexpensively and are an ideal food to grow at home, even if you have space constraints.

Planting and Harvesting Sprouts at Home

I used to grow sprouts in Ball jars more than 30 years ago, but growing them in soil is far easier and produces more nutritious and abundant food. It is also less time-consuming and takes up less space. I then started the process up again nearly 10 years ago.

However, as you may discern from the photos below, it has been more than five years since I gave up growing sunflower sprouts. This is primarily because I learned of the massive importance of excess omega-6 fat in the form of linoleic acid (LA) in the food supply.

Excess is the key here and that is what I was doing. I was growing the sprouts and consuming a large bowl of them nearly every day. Little did I know that this was radically increasing my LA intake to unhealthy levels.

The key is the dose. High-quality, unadultered olive oil can be healthy in the context of limiting it to about 1 tablespoon a day, while having a few ounces a day would rapidly put you into excess LA territory.

So, the bottom line is sunflower sprouts can be a healthy food and are certainly a far better choice than seed oils. However, sunflower seeds already have a high amount of LA at 17.7%, but the sunflower sprouts are 10% higher at 19.5%.13 Remember, you should limit your total daily calories to less than 2% LA. 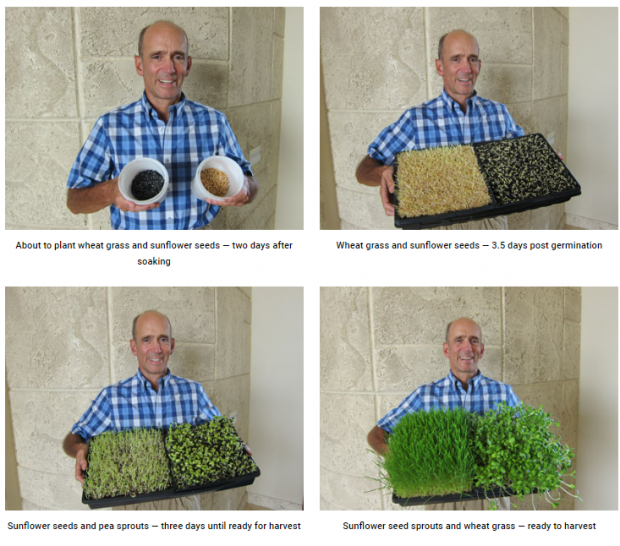 The video above shows you how simple it is to grow nutritious sprouts right at home, in just a few simple steps: 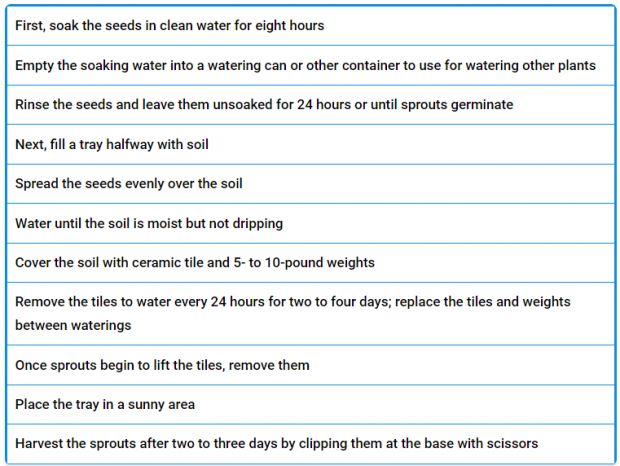 In about a week, you can have fresh, nutritious food. During times of food crisis, this makes sprouts an ideal food source, as, due to their short growth cycle, they can be harvested daily as needed.

Commercially grown sprouts are also one of the most commonly contaminated foods — another reason why growing your own makes sense. One pound of seeds can produce over 10 pounds of sprouts. Sunflower sprouts give you the most volume for your effort and, in my opinion, have the best taste.

In one 10-by-10 tray, you can harvest between 1 and 2 pounds of sunflower sprouts. You can store them in your refrigerator for about a week, but it’s even better to use them fresh, just after cutting.

Depending on where you live, you’re now starting to see food shortages to a greater or lesser degree. But regardless of how things appear right now, expect changes, potentially drastic ones, over the coming months and into 2023, because that’s when the diminished yields from the current growing season will become apparent.

By getting prepared now, you’ll be able to weather the storm and feel more at ease, knowing your most basic needs will be met. Growing as much fresh food as you can is one important strategy, but you’ll need to ensure you have plenty of seeds on hand. At bare minimum, stock up on sprouting seeds, but if you have the space, consider starting a garden or planting a small orchard.

If local regulations allow, you can add chickens for a steady supply of eggs. (Just remember that they, too, may need additional feed.) You can also join a local food co-op, and buy shelf-stable and nonperishable foods in bulk. Freeze-dried foods can have a shelf life of 25 years or more.

Canned foods and dry staples such as rice and beans can also stay viable long past their expiration date under the right conditions. Other good options include canned salmon, canned cod livers, sardines in water (avoid ones preserved in vegetable oil), nuts, powdered milk and whey and other nutritional powders you can mix with water.

Ideally, you’ll want to store food in a cool, dark place with low humidity. Bulk packs of rice and beans are best stored in a sealed food-grade bucket with some oxygen absorbers. Vacuum sealing food can also extend shelf life, as can basic food storage skills such as canning and pickling.

As I mentioned earlier, what’s old is new again; embracing the methods that your grandparents or great grandparents used to store their food out of necessity will allow you to be self-sufficient in the event of an upcoming food crisis. If and when that occurs, you’ll be glad for the sprouts growing on your windowsill.

Previous article by Dr. Joseph Mercola: Is the Latest Polio Scare Actually Caused by the Vaccine?

China Threatens the US Empire, Not the US Itself The Destruction of Everything Considered Normal Has Created Division, Hate, Instability, and Chaos