We Don't Believe You 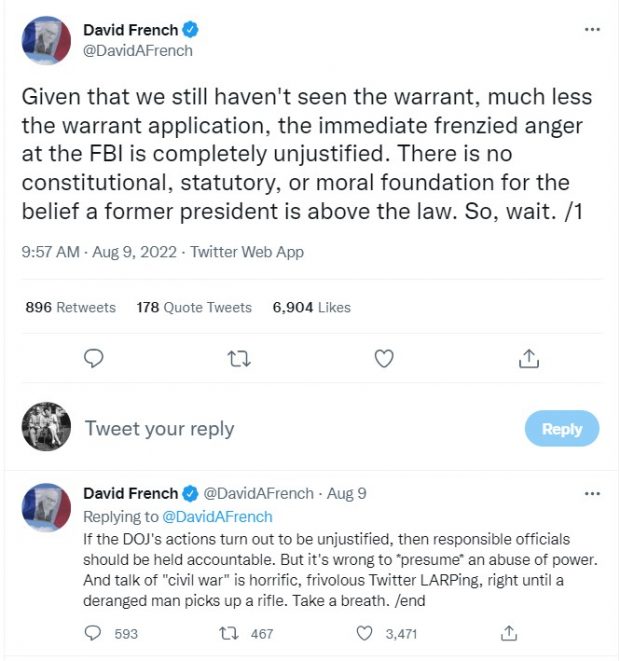 Imagine thinking federal police agents and lawyers will be “held accountable,” or that presidents are not above the law! Is this an afterschool special? “Let’s wait and see, folks, before we judge the situation. It might be perfectly on the up and up! Have faith in the rule of law and trust the process!”

French, in keeping with the listless residue of Conservative Inc., either can’t or won’t face the reality of postgoodwill America. This starts and ends with politics. If politics is war by other means, subterfuge is part and parcel of every battle and skirmish in that war. We are not required to take a combatant’s claims at face value, blundering ahead like Lucan and Cardigan at Balaclava. The contrary, in fact. Any political statement made today, by any politician or candidate or public official, can be answered thus: “We don’t believe you.” And with this comes a corollary: “We don’t trust you.”

When the Left talks about banning assault rifles, for example, we all know the true ambition of the gun controllers—many of whom are open and honest about their desire to completely eliminate private ownership of firearms in America. Progressives apply the same lens to bans on late-term abortion. But the Trump era, enhanced by the perverse dopamine incentives of social media, took this disbelief and distrust to a new rhetorical level. Witness today’s poisonous political lexicon, one that makes clear that any presumption of good intentions is gone: insurrection, treason, racist, Nazi, fascist, domestic terrorist, MAGAt. These terms are not used to persuade, but to dehumanize and banish. Which of course is nothing new in politics. But it’s worth pointing out the Frenchist folly of claiming that democratic norms are poised to reassert themselves and bring us together once Orange Man is gone.

The FBI raid on Mar-a-Lago is an obvious example of America watching two politicized movies. We are not required to judge it apart from the broader political context, like children examining a single rock. The entire event is bound up with the larger war against Trump, one which began almost immediately after he was elected, with the Russiagate campaign. The goal of that ongoing war is to ruin both Trump and his family, salting the earth with their populist movement of Deplorables. Trump and his supporters must be destroyed politically (at the very least), ensuring Trump cannot run for president again but also that no candidate outside the uniparty’s acceptable parameters can ever run again. So one of the most important campaigns in America’s political war effectively seeks to criminalize a whole category of dissent—or at least place dissenters outside the bounds of acceptable society. If you doubt any or all of the 2020 presidential election results, you are an election denier. If you protested at the Capitol, you are an insurrectionist. If you question Russian collusion, you are a Putin supporter. And so forth.

We have not seen the FBI’s warrant or the supporting evidence presented to the magistrate. Was the raid an actual step toward a criminal prosecution? What were the actual crimes contemplated and the specific evidence sought? We don’t know, but at this point, it doesn’t matter. Merrick Garland surely knew Republican partisans would view the raid as pure political harassment, a warning to Trump, his family, and close associates. He also surely knew that many Democratic partisans hope to gin up legal arguments to disqualify the former president from running again (either under the Fourteenth Amendment or, more dubiously, under this federal statute). And of course he know a media brouhaha would ensue. So there are two broad but conflicting interpretations of Garland’s actions. First, he is a brave defender of the rule of law who doggedly follows the evidence wherever it goes, with no consideration for politics, appearances, or timing whatsoever. Second, he knew exactly how ardent Trump fans would react to the warrant and seizures, and actively intended this effect. In other words, he intended to send a threatening message and quell political enthusiasm for Trump 2024.

Decent people can and should resist a world organized around politics, and deplore the politicized state of America. Ordinary Americans don’t want to live political lives and have their personal and professional relationships defined by this terrible environment. But politics is interested in us, as the saying goes. So we arm ourselves with a clear-eyed worldview, put away childish things, and never accept political pronouncements at face value. “We don’t believe you” is always the default position.

Will the United States Exist After November? Ivermectin: Why Is the Administrative State Willing To Kill You?