Why the Mirage of Lowflation Era Is Coming to an End

To paraphrase Milton Friedman, everywhere and always deflationary commodity outages and shortfalls are turned into general price inflation by the foolish monetary “accommodation” policies of the central banks. And the present pot-boiler inflation is no exception. 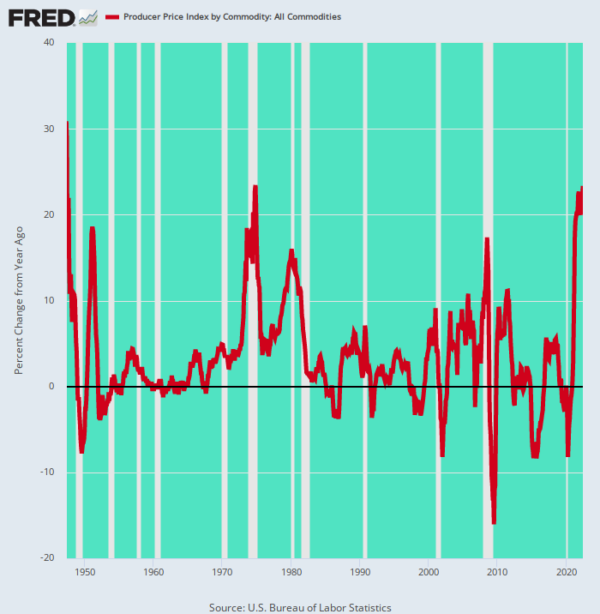 There is no mystery as to how central banks got so far off the deep-end. In fact, it was Milton Friedman and his chief disciple, Ben Bernanke, who paved the way. It was they who instilled the wrong-headed fear of deflation among central bankers, culminating in the “lowflation” group-think that, in turn, fostered the rabid money-printing of the past decade, especially.

The fact is, when the cold war ended in 1991 and the Soviet Union was consigned to the dustbin of history, an unprecedented opportunity for a virtuous deflation was triggered. That is, vast swaths of mankind economically impaled in the former Soviet bloc and Red China were freed from the albatross of Marxist economics, thereby opening the door to a massive inflow of cheap labor into the globally traded economy—a secular shift that had the potential to substantially reverse the west’s great inflation of the 1970s.

Goodness knows that a thorough-going deflation was more than overdue as the 1990s opened. And that’s when Mr. Deng of China in particular saw the opportunity to end communist autarky, join world trade and mobilize the vast labor resources that had been trapped in China’s rice paddies for centuries and its Maoist-afflicted industrial economy in more recent times.

The implications for inflation policy were momentous. Thus, during the heyday of American prosperity between 1953 and 1968, the general price level (CPI) rose by just 1.43% per annum and unit labor costs by 1.31%. Those figures don’t represent perfect price stability, but they provide a reasonable approximation in today’s world.

Stated differently, the embedded rate of inflation rose by 4.0X at the CPI level and 3.4X in terms of labor costs. That’s an acceleration of inflation with a vengeance. 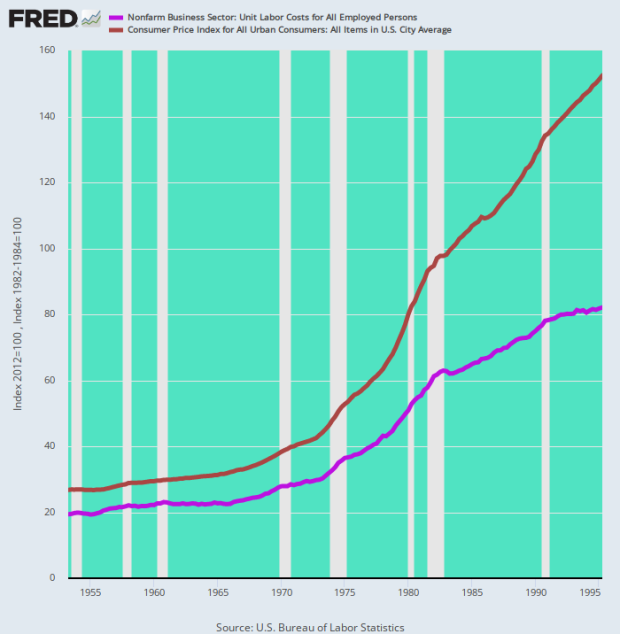 By the mid-1990s, therefore, the US economy was a sitting duck for low-wage competition because its cost and wage structure had been inflated by a central bank which mistakenly believed that inflation would be absorbed domestically and that industrial production would stay at home.

This was a drastic miscalculation which dramatizes the folly of the Fed’s inflation targeting regime—an insidious policy first pursued informally during the 1990s through January 2012 and then formalized with the adoption of the 2.00% target thereafter.

What was actually required by the overhang of high domestic wages and costs depicted above was an extended period of domestic deflation. That would have purged the inflationary excesses of 1971-1995 and narrowed the dollar cost gap between the newly mobilized economies of China and its emerging supply chain and those of Pittsburgh, Detroit, Chicago and the lesser nodes of US industrial production.

But Alan Greenspan, who desperately desired to be toast of the town in Washington and New York, was not about to shut down the Fed’s printing presses and permit domestic wages, prices and costs to deflate. And thereafter Bernanke actually became hysterically opposed to the needed deflationary curative owing to his slavish adherence to Milton Friedman’s fundamentally flawed argument that insufficient money-pumping by the Fed during 1930-1933 had caused the Great Depression.

The result was one of the worst Faustian bargains in history. The Fed (along with other central banks) inflated wildly, with its balance sheet (brown line) rising from $470 billion to $8.8 trillion during the 26 years after 1995. That’s an 18.7X gain or an out-of-this world 12% growth per annum, when the Fed balance sheet should have increased hardly at all during the period.

The counterpart result was a massive off-shoring of the US industrial economy. The monthly trade deficit in goods (purple line) rose from $13.6 billion in 1995 to $100.5 billion in 2021.

That is to say, the Fed’s stupid 2.00% inflation targeting policy caused a further 56% rise in domestic unit labor costs during that quarter-century period, thereby inflating, rather than deflating, the dollar cost of production gap between the US and the China-based supply chains. 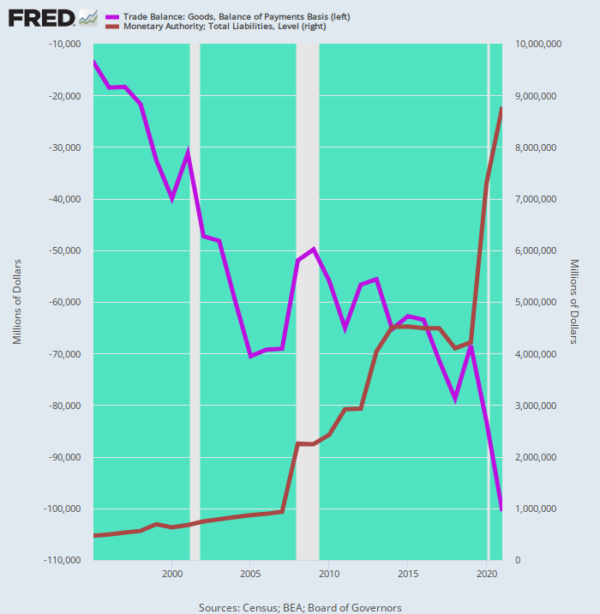 Not only did this vast off-shoring of the US industrial economy eliminate millions of high paying jobs, but, even more importantly, it fostered the delusion that there was no inflationary consequence to the Fed’s madcap money-printing, and that the US economy was actually suffering from a new form of monetary disability that was totally new under the sun: Namely, “lowflation” defined as a persistent shortfall from the now sacred 2.00% target.

But lowflation was never a steady-state reality—just the one-time consequence of off-shoring and an artifact of the phasing of the global commodity cycle.

The Courage To Face Covid-19 Taxes and Death