'One of The Worst Downturns in Recent History': Zuck Warns Facebook Employees To Brace For Layoffs

One month ago we showed that while the BLS still revels in its seasonally-adjusted statistical nonsense to divine the monthly level of payrolls, the real world is seeing a wave of mass layoff the likes of which have not been seen since the covid crash 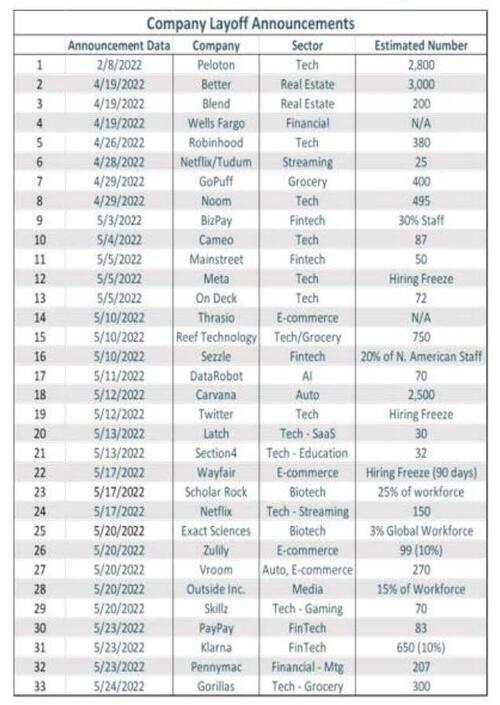 Fast forward to today when it appears that we are about to hit the motherlode of mass layoffs, after none other than Zuck sounded the alarm. According to Reuters, Facebook-owner Meta Platforms (which will likely be undoing its name change just as bitcoin bottoms) has cut plans to hire engineers by at least 30% this year, CEO Mark Zuckerberg told employees on Thursday, as he warned them to brace for a deep economic downturn.

“If I had to bet, I’d say that this might be one of the worst downturns that we’ve seen in recent history,” Zuckerberg told workers in a weekly employee Q&A session, audio of which was heard by Reuters.

And while Zuck emphasized the lack of hiring – noting that it has reduced its target for hiring engineers in 2022 to around 6,000-7,000, down from an initial plan to hire about 10,000 new engineers, which comes amid a hiring paused announced month – he confirmed that layoffs are also coming saying the company was “turning up the heat” on performance management to weed out staffers unable to meet more aggressive goals.

“Realistically, there are probably a bunch of people at the company who shouldn’t be here,” Zuckerberg said, adding that “part of my hope by raising expectations and having more aggressive goals, and just kind of turning up the heat a little bit, is that I think some of you might decide that this place isn’t for you, and that self-selection is OK with me.”

Others made the message even more forcefully, with Chief Product Officer Chris Cox saying that the company must “prioritize more ruthlessly” and “operate leaner, meaner, better executing teams.”

“I have to underscore that we are in serious times here and the headwinds are fierce. We need to execute flawlessly in an environment of slower growth, where teams should not expect vast influxes of new engineers and budgets,” Cox wrote.

Translation: when even the most profitable tech companies are braching for mass layoffs, the bottom is about to fall out…