A Visit to Venice: Masks and the Power of Covidism

It was good to visit Venice again last week. It’s been a long while since the last time… more than twenty years.

And oh, my, how the world has changed in the meantime, and in last two years especially.

Coming back was educational in more ways than one. For one thing, it taught one a lesson in the great insidious power of Covidism.

If you do not know, the Italian government still forces its citizens to wear masks on public transport (and some other places as well). As if this wasn’t enough, staff and personnel in businesses and hotels are required to cover their mouth and nose when dealing with customers.

The mask mandate is in force even though the masks have been amply shown to be ineffective and harmful. Furthermore, we are now well into the spring when coronaviruses – including the SARS-CoV-2 virus – tend to lose much of their virulence. 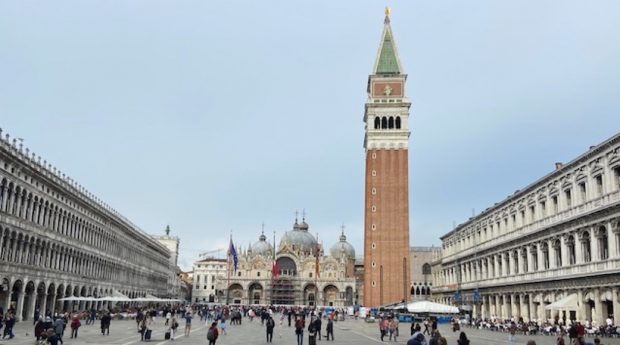 And yet astonishingly enough, the Italians are forced to don the useless face diapers even as more than 80 percent of them are fully vaccinated and most are boosted to boot.

(Do you remember when Anthony Fauci claimed that a 60 percent vaccination rate would give us herd immunity?)

But the mask mandate was not the most startling thing I witnessed in northern Italy last week. Far more astonishing was observing that there was virtually 100 percent compliance with the misguided policy.

This came as a sharp shock and a profound revelation.

If you know anything about Italians, you will know that they could never be described as a disciplined or obedient lot. Italians are a wild, unruly, argumentative, creative, independent-minded people. To implement a coherent public policy in that nation is an almost impossible task. 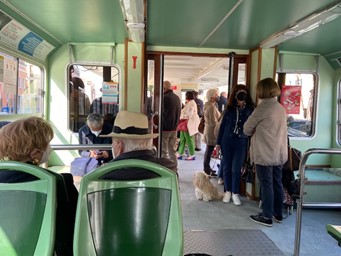 On a vaporetto, Venetian water bus. The Italian government still mandates masks on public transport and compliance is nearly 100 percent.

Civic cooperation and public unity are simply not in the Italians’ blood. My dear philosopher friend Gianni from Rome has told me repeatedly: “For Italians laws and rules are only suggestions.”

Italians’ general unwillingness to conform or subscribe to agendas is one of the reasons why Italy was so late to organize herself into a nation. Partially managed chaos where everybody is seemingly pulling in their own direction is the Italian modus operandi. Not surprisingly, governments in Italy rarely last more than three years. Since 1945, the country has had 39 administrations.

But even though Italians rarely agree on any program or rule, one ordinance they now nearly universally obey: Most of them wear the useless masks whenever their misguided government orders them to do so.

The Covidistas thus managed to turn the formerly proud, independently-minded Italian people into a nation of facially-diapered sheep.

This subjugation of the intractable Italians to the mask tyranny demonstrates to me more than anything the immense power and dangers of Covidism.

How sad that this rare instance of Italian public unity has occurred in connection with a policy that is completely misguided and wrong. It is a policy that has no real utility and only harms those who participate in the charade.

There have been more than one hundred and fifty studies showing the ineffectiveness of masks. A Stanford study, for example, came to the following conclusion:

“The existing scientific evidence challenges the safety and efficacy of wearing facemasks as preventive intervention for COVID-19. The data suggest that both medical and non-medical facemasks are ineffective to block human-to-human transmission of viral and infectious disease such as SARS-CoV-2 and COVID-19, supporting against the usage of facemasks. Wearing facemasks has been demonstrated to have substantial adverse physiological and psychological effects. These include hypoxia, hypercapnia, shortness of breath, increased acidity and toxicity, activation of fear and stress response, rise in stress hormones, immunosuppression, fatigue, headaches, decline in cognitive performance, predisposition for viral and infectious illnesses, chronic stress, anxiety, and depression. Long-term consequences of wearing facemasks can cause health deterioration, developing and progression of chronic diseases, and premature death.”

If the Covidistas could break the Italian spirit with rank propaganda and lies what hope is there for other nations?

What chance stand the rule-worshiping Swiss or Germans against the Covidic tyranny and its biosecurity terror state ran by ruthless technocrats?

The Italian experience made me wonder: If even the Italians could not withstand the depredations of the gaslighting Covidistas, what hope is there for the rest? 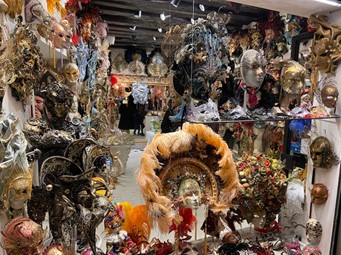 Different kind of masks on display in Venice

But then all is not lost. In one of the shops, I noticed a salesgirl – a young woman in her late twenties – wearing the obligatory mask which is required of customers facing personnel in public establishments. I am not sure what it was, but somehow I sensed that she was part of the resistance.

“You must hate that mask,” I told her.

“Yes, it’s hard,” she answered. “But it is not the worst of it,” she continued. “For three months I could not come to work, because I did not have the Covid pass, and they would not let me board public transport without it.”

“So, you are not vaccinated,” I said.

“No, I am not. My father would not allow it,” she returned.

“How prescient of him,” I observed. “He turned out to be right. These shots do not work. The vaccinated are now getting infected and falling seriously ill at higher rates than the unvaccinated.”

I looked at her and said: “You have a good strong father.”

She nodded with a smile, and I thought to myself: ‘If there are people like that around there is hope still.’

After I finished writing this piece a video came to my attention. The footage was shot in a supermarket in the northern Italian city of Piedmont a week after the government dropped the mask mandate. And yet, shockingly enough, nearly everybody there still wears a mask. This would tend to confirm the impression I had from Venice of the current Italian state of mind. One thing, however, needs to be kept in mind. There is a palpable difference in mentality between northern and southern Italy. People of northern Italy tend to be closer in their outlook to European cosmopolitanism than their fellow citizens who live further down the Italian peninsula. I suspect that mask and vaccine compliance is lesser in the regions south of Rome, but still what we are witnessing these days in Italy is nothing short of frightening.

Previous article by Vasko Kohlmayer: The Vaccine Passport: Gaslighting of an Egregious Kind