A severe pilot shortage in the US slashed flights just as the travel season ramps up, which will cause ticket prices to skyrocket this summer, according to CNBC.

The origins of the shortage began in the early days of the virus pandemic when pilot hiring, training, and licensing came to a stall. Then airlines forced thousands of pilots into early retirement to slash labor costs as travel demand cratered.

Now lawmakers on Capitol Hill are proposing legislation to increase the retirement age for airline pilots from 65 to 67 to extend pilots’ flight time as the industry scrambles for solutions.

United Airlines CEO Scott Kirby told investors during an earnings call in April that the shortage could last for years.

“The pilot shortage for the industry is real, and most airlines are simply not going to be able to realize their capacity plans because there simply aren’t enough pilots, at least not for the next five-plus years,” Kirby said.

The shortage has hit regional carriers the hardest. Phoenix-based Mesa Air Group, which flies for American and United, lost tens of millions of dollars last quarter because of flight reductions due to the lack of pilots.

“We never fathomed attrition levels like this,” said Mesa CEO Jonathan Ornstein. “If we don’t fly our airplanes, we lose money. You saw our quarterly numbers.”

Ornstein said, on average, it takes five months to replace a pilot. He expressed his airline “could use 200 pilots right now.”

Regional carrier Republic Airways, which flies for American, Delta, and United, requested US government aviation authorities to allow pilots with 750 hours, half of the 1,500 required, to fly for the airline.

The shortage has also caused Alaska Airlines and JetBlue Airways to reduce flights.

The latest CPI data showed the most significant MoM increase for airline fares, at 18.6% in April. 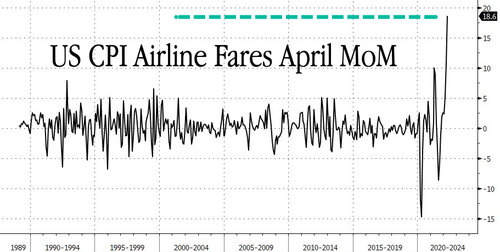 However, new sales data from Adobe Digital Insights suggests consumers spent $1 billion less on airline tickets in April than in March, a sign that rampant airfare inflation could crimp demand this summer.

Darby said the shortage could indicate flights to small metro areas might be reduced or cut entirely. He also said, “there is no quick fix.”

Monkeypox: 'Fool Me Twice, Shame On Me' It’s Time to Walk Away from a Hopelessly Corrupt Federal Government that Facilitates Biden’s Destruction of America