Can Europe Survive Without Russian Coal and Oil? Here’s What It Means for Skyrocketing Prices… 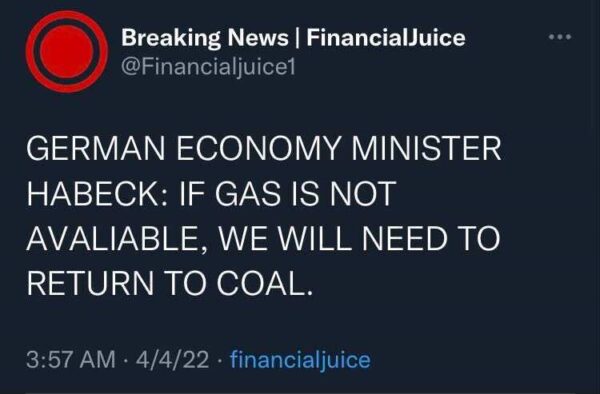 Which brings me to….

So the EU, already in the middle of the worst energy crisis since the Arab oil crisis and likely worse, is now pushing to eliminate imports of Russian coal. Just so you understand the importance of Russian coal to Europe…

Some 70% of Europe’s thermal coal comes from Russia. Coal accounts for about 20% of continental Europe’s electricity production (as of 2019; perhaps it is 25% now). 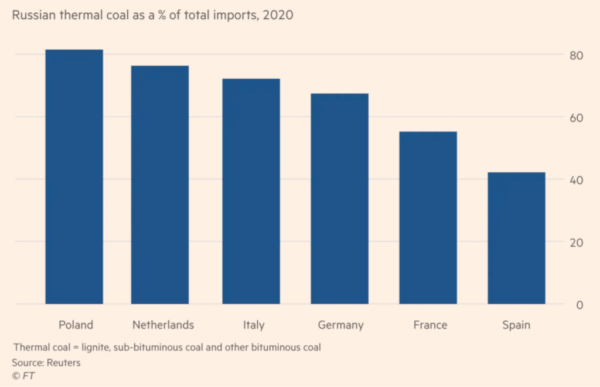 Watching the news is enough to drive a man to drink or to put his drink through the telly.

But fear not, there is a silver lining.

Sure, the Russians can take their coal and stick it where the sun doesn’t shine! This works well for a populace now being riled up to the hysterical level, but the question remains: who are they going to find to replace that coal? Are the EU not aware that there is no spare capacity in the big coal exporting nations? Did no one tell the Europeans that coal is base load? Are they not aware they can’t get anymore gas to offset any deficiency in coal? My goodness, when you look at this purely rationally, the only conclusion we can come to is that the energy crisis in Europe is very much in its infancy.

If you thought that there is an issue with respect to security of oil supplies, security over supplies of coal is a different dimension. Indonesia, Australia, and Russia accounted for some 75% of world coal trade in 2019. 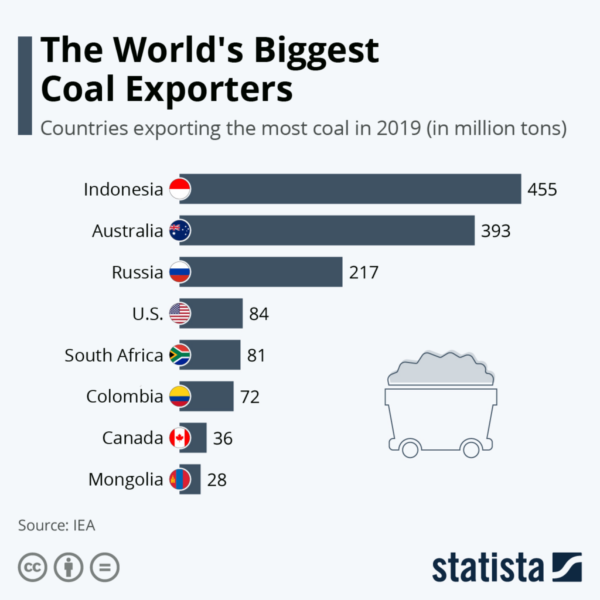 Whether or not Brussels can get an agreement by EU state members to ban the import of coal remains to be seen…. But given the EU’s neo-marxist Malthusian ideology and the recent “reported” war crimes committed by Russian troops, it does appear that there is a way “better than even” odds of a ban being agreed to.

But wait. There is more — a blockade of Russian oil? This is becoming more scary by the day!

Josep Borrell, the EU’s top diplomat, said yesterday that it is now more a question of when, rather than if, the EU imposes a blockade on Russian oil.

The topic will be on the table for debate at Monday’s foreign affairs council meeting, Borrell said, adding: “Sooner or later — I hope sooner — it will happen.”

Preparations for an oil ban, potentially as part of a sixth package of EU sanctions, reflect a marked hardening in the mood among member states, driven by the reports of atrocities committed by Russian troops in Bucha and other areas that were under occupation.

Political pressure for action is only mounting. In a symbolic vote, the European Parliament yesterday backed by a large majority an immediate full embargo on Russian oil, coal, gas and — in a potential sign of things to come — nuclear fuel.

It isn’t hard to figure out where this is all heading (you ain’t seen nothing yet when it comes to rising commodity prices). What keeps us awake at night is where this all heads politically and socially.

What we do expect from the “great resetters” is the following:

Middle class lifestyles will be curbed as we’re instructed to strive for “sustainability” and transition to shitty pod apartment living and mass transit, while eating synthetic foods grown in labs. But fear not, the Obamas, Clintons, Klaus’ will still keep their mansions, and Silicon Valley futurists will insist on exemptions for their yachts and private jets.

The truth is that left-wing governments have deliberately curtailed drilling and capex spending on domestic energy. They shut nuclear power plants and subsidized costly, inefficient solar and wind projects. Germany froze after their wind turbines stopped working, and they import most of their energy now.

But it’s not just the sausage eaters, as across the West we’re seeing the same thing. We have now ended up not with any form of “green sustainable utopia,” but instead with fuel shortages, rocketing prices, energy dependency often on the world’s most repressive regimes, and we’re about to have severe food shortages. All of this is directly because of these initiatives.

But watch, they will lay the blame on Putin.