The Libertarian Party needs people to chronicle its history and this book is an accessible source of information beginning with its founding days. As one institution in the perennial struggle of liberty vs. power, libertarians must learn from the Party’s successes and failures. Although it is one of the longest continuously active political parties in US history, the LP has precious little to show for the effort. Initial successes have been replaced by stagnation despite a steady increase in the number of individuals who identify as libertarian and several high-profile candidates.

I am very optimistic about the prospects for liberty, and I do not discount the potential of the Party as a vehicle to success.  I can see encouraging signs in all corners of the world, mostly non-political, and I certainly do not want to discourage anyone working in the trenches opposing statism. There has never been a better time for political campaigns that start with the delegitimization of government. 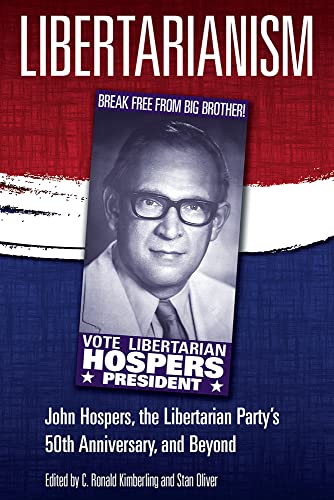 Many readers will be unfamiliar with the name of John Hospers and the bulk of this book is not about him. He was a teacher and philosopher, a university professor, and a writer.  He was interested in aesthetics, Objectivism, and political philosophy and he authored eight books on philosophy (mostly on aesthetics), including Libertarianism: A political philosophy for tomorrow. Most noteworthy, he was a friend and confidant of Ayn Rand and the first presidential candidate of the Libertarian Party in 1972!

I will review the contents of the book, present the general perspective of the book, and briefly describe its contents. My biggest problem with the book is that it portrays the Objectivist-Minarchist view of the state in a positive light and the Rothbard-anarcho-capitalist view in a negative light, and crucially it criticizes Rothbard’s position on the Cold War. While both sides agree on most issues, readers should not view this issue as isolated to foreign affairs, but rather as of utmost importance in terms of overall libertarian public policy strategy. I reserve my assessment and critical remarks about this the disagreement to the end of this review.

The book offers informed commentary and some detailed analysis, but it is clearly not an attempt to be comprehensive about any of the issues suggested by the title. The first section looks back to the first standard bearer, philosophy-teacher John Hospers.  Short essays by Jack Wheeler, Dave Dyer, Ron Manners and philosopher Chris Matthew Sciabarra harken back to their early days of the Libertarian Party movement. This section is also a primary source of commentary on the Rothbard vs. Objectivist divide on the Cold War within the party.

Section 2 is “Libertarianism in History,” a loosely connected set of six essays ranging from the role of history, a couple of mini-histories, two policy experiences, and an interview of Ronald Reagan. The breadth of the book naturally makes organization difficult, and readers will sense this challenge reading from chapter to chapter within each section, but there are nuggets of information important to the history of libertarianism.

The largest section, “Libertarian Perspectives,” has ten essays that are essentially policy advocacy papers.  They range from the well-trodden issues of abortion and immigration to more timely essays on health care, capitalism, and the Coronavirus Crisis of today.

The final section on “The Future of Libertarianism” contains ten short hopeful essays, several of which harken back to previous sections. The essays range from Professor Hospers’s own learned advice for promoting liberty to an apocryphal letter written to James Madison by media personality Glenn Beck on the problems of the US Constitution.

Overall, the selection of contributors and the weight of their contributions are not well balanced and are only loosely bound to the three prongs of the book’s subtitle.  One of the two editors, C. Ronald Kimberling, penned four of the essays as did Dr. Mary Ruwart. Caryn Ann Harlos and Judge James P. Gray also contributed two essays apiece, totaling almost one-third of the book. This large chunk of material is dispersed among the essays by libertarian luminaries and unsung heroes. 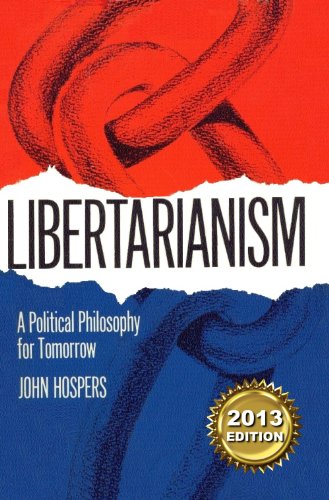 The book discusses the early divide between Marxist leaning libertarians and regular libertarians, but the biggest divide within the Party during these early years was between those that sided with the Rothbard radical position and those who followed the anti-communist, limited-government agenda. This is an important warning because the authors write about this divide as if it still exists today without any resolution, reconciliation, or new facts. Since that time the Soviet threat has been exposed as a paper tiger and was largely an illusion created and suckled to maintain Cold War.  This vindicates Rothbard and it implies that the Rothbardians were also correct to focus on the US government as the greatest threat to liberty, both foreign and domestic. History makes clear that America was the most warlike, interventionist, and imperialist government of the 20th century.  The early libertarian debate on these issues, including Rothbard’s and Hospers’s own views, can be read in the pages of the Libertarian Forum.

For example, the book accuses Rothbard of being the “ultimate Platonist,” ignoring reality and being naïve about property rights and national defense. “No matter what, you could depend on Rothbard to side with the Soviet Communists against America, no exceptions.” Furthermore, Rothbard is criticized for urging libertarians to delegitimize and undermine the State and its pretext during the height of the Cold War.

I admit that in the late 1960s and early 1970s (when the Party was founded and started running candidates) I too was a John Wayne inspired Cold Warrior and Soviet hater. I was less worried about China because of my mother’s constant reminder to “clean my plate” because Chinese children were starving. Then there was the puzzling policy of subsidized wheat sales to the Soviets. The Cold War way of thinking was later reinforced by my economics professors who showed Newsweek data that the Soviet-Warsaw Pact outgunned US-NATO forces in all key weapon systems and would soon outpace the West in terms of GNP. I don’t blame myself or others, because at that point in time even the minions at the CIA got the communist threat all wrong. Like most people, I was also unaware that most non-Russian Soviet troops were provided with second class weapons and little in the way of live ammunition. Apparently, Murray Rothbard was one of the few to see through all the Cold War propaganda and subterfuge.

The Soviet’s status as a paper tiger is recognized briefly on page 28 of the book, in the context of a Cold War strategy discussion. However, that discussion implies that a few hand held missiles sent to Afghanistan could bring down the entire mighty Communist Empire, rather than just exposing the futility of its system. Rothbard’s position on the ineptness of socialism and that the Soviet Union and Communist China were paper tigers, and that the entire Cold War came at a terrible cost and no benefit to the average American was fully vindicated in the 1980s and 90s when communism collapsed due to its own inherent weaknesses.[1] At the time of the collapse, Cold Warriors, now called Neocons, were aghast and grasping at straws to defend their “strategy.” It is worth noting that the LP and its cold warrior caucus gained no standing with the downfall of communism, while the Austrian school of economics did benefit.[2]

Never a Dull Moment: A Libertarian Look at the 1960s

The other side of the fake Soviet threat coin was that most everything bad about American government, including the government intervention in the economy, multilayered nuclear deterrence, and “duck and cover” school drills were the result of and done in the name of the global crusade against the evil international Communist conspiracy. In the wake of the communist collapse, this evil has morphed into an international terrorist conspiracy and most recently into a desperate thrust to reignite the “Soviet” threat in the Ukraine.

These latest excuses are also debunked by a full and balanced understanding of American history. The actual history of America has been for the US to take over North America, the Spanish Empire, to declare the Western Hemisphere its own sphere of influence, to establish hegemony over Western Europe and Japan, and to court influence in Russia and China. Such power, even if used Platonically, was never dreamed of by Hitler, Stalin, and Mao. Catch phrases like Manifest Destiny and American Exceptionalism should be taught for what they are: Excuses for empire and war. A globe with flag push pins representing American military bases, interventions and wars exposes this error and looks much more frightening than the mockup of the Covid-19 spike protein. And yet, we are told that, if the US government taxed and spent any less money and lives, then Hitler, Stalin, and Putin would rule the world and put humanity at risk.

Most people today see communism as a failure but fail to appreciate the that much of American government and empire was built on top of that house of cards. However, some Americans do indeed realize that Globalism, Militarism, Environmentalism, the War on Terror, and the fascist corporate state economy headed by the Fed are the real threats to liberty and prosperity in the world.

From this perspective, libertarians should find Rothbard’s position that political action should delegitimize the state and undermine its power attractive relative to the libertarian tact of making the railroads run on time or getting your garbage picked up at a reasonable cost. Economic libertarianism with its sole focus on government budgets and taxation is a highly limiting political strategy. So, I agree with contributor Kevin Shaw’s essay which indicates that libertarians should proceed forward as enemies of the State.

For example, the budget of the War on Drugs is small in monetary terms, but it also costs lives, increases crime, destroys families, and undermines society to the benefit of the police state.  The victories of the drug legalization movement in recent years highlights the importance of liberty over economy, although both, along with science, play a role.

Recognizing that Rothbard was prescient about the Soviet Cold War threat as well as the wide-ranging dangers of the American Empire are a necessary step to a successful political strategy. He was unique in that he had the brain to recognize the biggest dangers to liberty and he had the courage to stand in opposition to the entire apparatus of America’s Cold War, including his political friends. Surely, the Libertarian Party would be better off today and in higher standing with the electorate had they followed Rothbard’s advice.

Previous article by Mark Thornton: Nickel: How Government Alchemists Turned a Base Money Hard and Now Are Expected to Kill It.

How Will Human Life on Earth End, And What to Do About This? Letter to the US HHS Office of Global Affairs