With another batch of 11,000 Pfizer documents, released April 1, 2022, old suspicions have gained fresh support. As reported by “Rising” cohost Kim Iversen (video above), the first bombshell revelation is that natural immunity works, and Pfizer has known it all along.

The clinical trial data showed there was no difference in outcomes between those with previous COVID infection and those who got the shot. Neither group experienced severe infection. Natural immunity was also statistically identical to the shot in terms of the risk of infection.

The second revelation is that side effects from the shots were more severe in younger people, aged 18 to 55, than those aged 55 and older. (The risk of side effects also increased with additional doses, so the risk was higher after the second dose than the first.)

As many of us have said all along, the risk of severe COVID is dramatically lower in younger people than those over 60, which makes an elevated risk of side effects unacceptable.

As noted by The Naked Emperor on Substack,1 “with a vaccine that is producing more frequent and more severe reactions and adverse events in younger individuals, the vaccine should have been restricted to those who were actually at risk of severe COVID-19.”

Interestingly, Pfizer’s documentation also includes medical information that mainstream media and fact checkers have labeled as misinformation or disinformation. A pediatric consent form lists several possible side effects, including a myocarditis rate of 10 in 100,000 — far greater than the 1 in 50,000 (i.e., 2 in 100,000) rate previously reported.

We also know that myocarditis is far more frequent in young males, so for them, the risk is significantly higher than 10 in 100,000, as they make up the bulk of these injuries.

Effects on Reproductive Health Are Unknown

The consent form also specifies that the effect on sperm, fetuses and nursing children are unknown. Yet health authorities and media have espoused as “fact” that the shot does not affect reproductive health or fertility and is perfectly safe for pregnant and nursing mothers.

If an effect is unknown, by definition you cannot claim it to be harmless. If you do, you are lying, plain and simple, and Centers for Disease Control and Prevention director Dr. Rochelle Walensky is but one in a long list who is guilty of this. She has repeatedly assured the public that the jab poses no health risks to pregnant women or their babies. Here’s Walensky in May 2021:

And here she is, in October 2021, still claiming there are no risks.

Similarly, in August 2021, when Comirnaty was licensed, Dr. Anthony Fauci, director of the National Institute of Allergy and Infectious Diseases, claimed the COVID jab was safe during pregnancy:

The American College of Obstetricians and Gynecologists (ACOG) also make definitive statements about safety, claiming “Vaccination may occur in any trimester, and emphasis should be on vaccine receipt as soon as possible to maximize maternal and fetal health.”2 Yet even the Comirnaty label3,4 states that “available data on Comirnaty administered to pregnant women are insufficient to inform vaccine associated risks in pregnancy.”

Antibody-Dependent Enhancement Has Not Been Ruled Out

Many who have warned about the possibility of mRNA shots causing antibody-dependent enhancement (ADE) — a situation in which you end up being more susceptible to serious infection than you would have been otherwise — have been smeared and demonized by media and labeled as disinformation spreaders.

Yet Pfizer’s own consent form clearly states: “Although not seen to date, it cannot yet be ruled out that the studied vaccine can make a later COVID-19 illness more severe.” As noted by Iversen, if ADE truly was of no concern at all, the consent form would not include it. Yet there it is.

As of February 28, 2021, Pfizer had 138 cases of suspected VAED, 75 of which were severe, resulting in hospitalization, disability, life-threatening consequences or death; a total of 38 cases turned out to be lethal and 65 remained unresolved.6,7

Moreover, as noted by the Daily Expose,8 “Phase 3 clinical trials are designed to uncover frequent or severe side effects before a vaccine is approved for use, including ADE. But herein lies the problem, [because] none of the COVID-19 vaccines have completed Phase 3 trials.”

Pfizer’s Phase 3 trial is due to be completed February 8, 20249 — nearly two years from now! Despite that, Pfizer concluded in its FDA submission that “None of the 75 cases could be definitively considered as VAED.”

“[H]ow on earth could they not definitively conclude that VAED was to blame when 75% of the confirmed ‘break-through’ cases reported to them were severe disease resulting in hospitalization, disability, life-threatening consequences of death?” The Daily Expose asks.10

Another revealing statement found in the documents is this:

“Clinical laboratory evaluation showed a transient decrease in lymphocytes that was observed in all age and dose groups after Dose 1, which resolved within approximately one week …”

In other words, Pfizer knew that, in the first week after the shot, people of all ages experienced transient immunosuppression, or put another way, a temporary weakening of the immune system, after the first dose.

As noted by Iversen, this may have skewed infection rates, as people were not considered partially vaccinated until 14 days after their first shot,11 and officially fully vaccinated two weeks after the second dose.

If people are susceptible to infection during that first week, yet are counted as unvaccinated during that time, this makes it appear as though the unvaccinated are more prone to infection when that’s simply not true. Pfizer’s own trial showed infection was significantly more common in the vaccine group than the placebo group — 409 versus 287 — within the first seven days of the jab.12

Fully Vaxxed Are More Likely to Die From COVID

The fact that Pfizer and the U.S. Food and Drug Administration were aware the shot caused immunosuppression is incriminating, now that U.K. government data show that, compared to the unvaccinated, those who have received two doses are:13

The Pfizer documents admit there was a temporary drop in immune function after the first dose, but the real-world data showing an increased risk of severe infection and death due to COVID among the double jabbed suggest ADE may indeed be at play later on as well.

The chart below, created by the Daily Expose,14 using data from the UKHSA Vaccine Surveillance Report for week 13, 202215 (pages 40 and 45), reveals who’s more likely to get COVID. And the infection rate for triple-vaxxed is even higher than the double vaxxed. 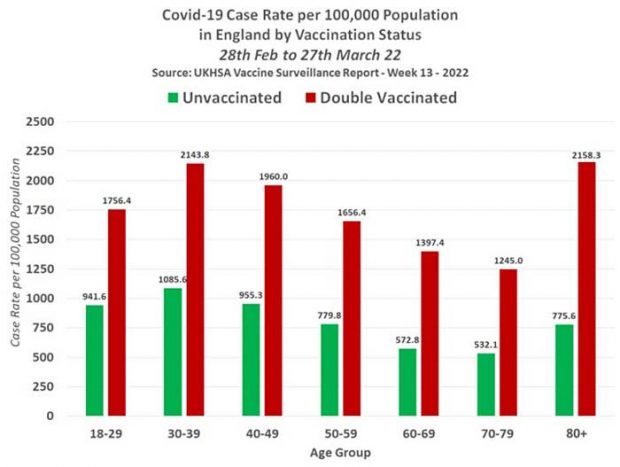 The next chart was created by the Daily Expose16 using data from pages 41 and 45, comparing COVID hospitalization rates. 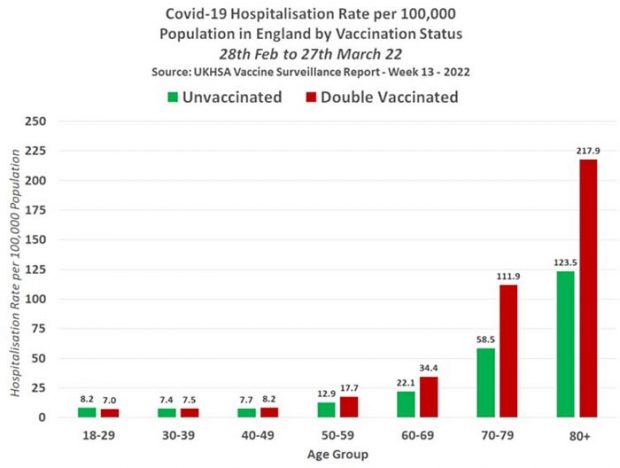 And, finally, there is a comparison of the death rates, based on pages 44 and 45 of the UKHSA Vaccine Surveillance Report for week 13, 2022.17 Anyone over the age of 40 who has been double jabbed is now more likely to die of COVID than an unvaccinated person of the same age. 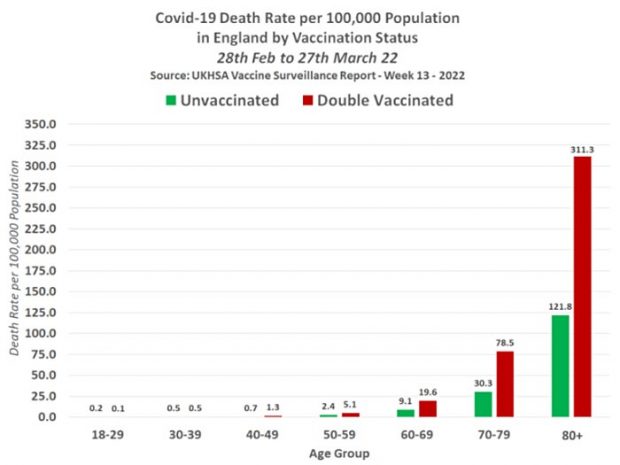 The Daily Expose goes on to calculate and graph the real-world effectiveness rate of the COVID jab, and it’s dire news:18

The following chart shows the real world COVID-19 vaccine effectiveness against death among the double vaccinated population in England, based on the death rates provided above … 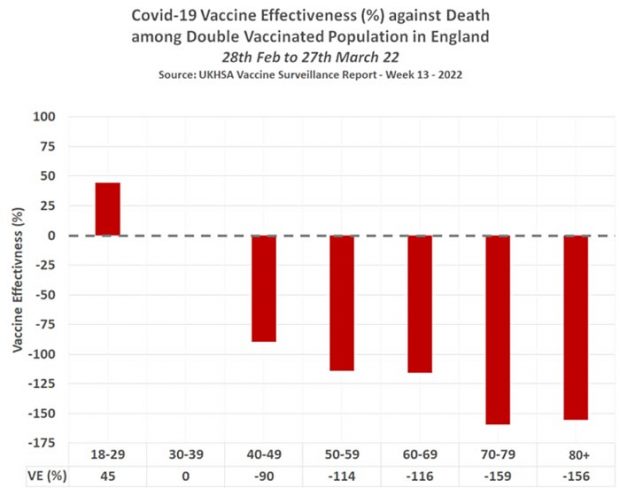 For the last two years, we’ve been keeping an eye on the U.S. Vaccine Adverse Events Reporting System (VAERS), shaking our heads in disbelief as the numbers shot up by the hundreds every single week, rapidly outpacing injuries for every other vaccine combined over the past 32 years.19

As of March 25, 2022, there were 1,205,753 COVID jab-related reports, including 145,781 hospitalizations and 26,396 deaths.20 There has never been a medical product in modern history that can compare. Nothing has been as injurious and lethal as these experimental injections.

In an earlier batch of documents, we learned Pfizer received 42,086 case reports containing a total of 158,893 events in the first three months of the rollout. In that release, the number of doses shipped was redacted, but in the April 1, 2022, release, it was left unredacted, which means we can now calculate the rate of adverse events reported to Pfizer in those first three months.

We now also have documentation showing Pfizer, by the end of February 2021, had hired 600 additional full-time employees to process the unprecedented influx of adverse event reports, and they predicted that by the end of June 2021, they’d end up hiring more than 1,800.22

In the end, the COVID jab will go down in history as the biggest medical malfeasance ever to occur with the willing participation of both drug companies and regulatory agencies. And there’s no end in sight.

I’m not sure what it’ll take for this public health nightmare to end and for the responsible parties to be held to account for their criminal negligence, but apparently, we’ve not hit critical mass outrage yet.

Behind Bilderberg, Trilateral, WEF: the Globalists Have a Major Problem Western Dissent from US/NATO Policy on Ukraine Is Small, Yet the Censorship Campaign Is Extreme