The media outlets which spread this lie from ex-CIA officials never retracted their pre-election falsehoods, ones used by Big Tech to censor reporting on the front-runner.

One of the most successful disinformation campaigns in modern American electoral history occurred in the weeks prior to the 2020 presidential election. On October 14, 2020 — less than three weeks before Americans were set to vote — the nation’s oldest newspaper, The New York Post, began publishing a series of reports about the business dealings of the Democratic frontrunner Joe Biden and his son, Hunter, in countries in which Biden, as Vice President, wielded considerable influence (including Ukraine and China) and would again if elected president.

The backlash against this reporting was immediate and intense, leading to suppression of the story by U.S. corporate media outlets and censorship of the story by leading Silicon Valley monopolies. The disinformation campaign against this reporting was led by the CIA’s all-but-official spokesperson Natasha Bertrand (then of Politico, now with CNN), whose article on October 19 appeared under this headline: “Hunter Biden story is Russian disinfo, dozens of former intel officials say.” 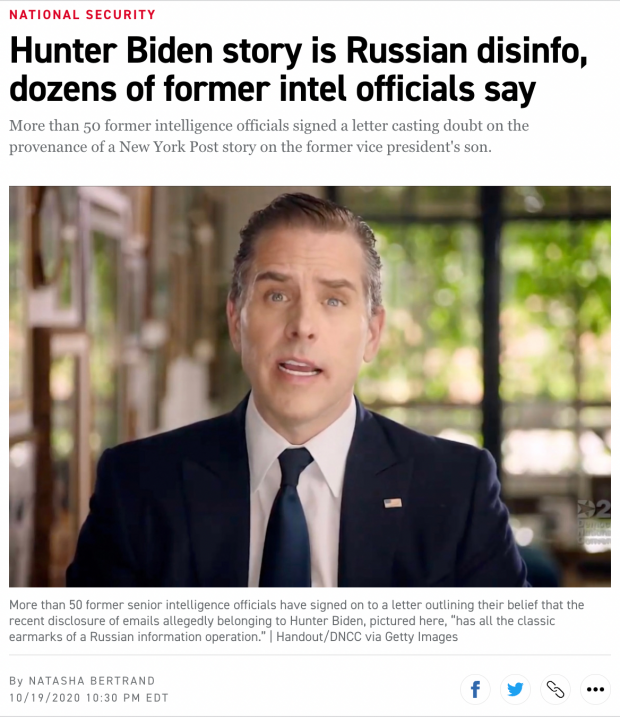 These “former intel officials” did not actually say that the “Hunter Biden story is Russian disinfo.” Indeed, they stressed in their letter the opposite: namely, that they had no evidence to suggest the emails were falsified or that Russia had anything to do them, but, instead, they had merely intuited this “suspicion” based on their experience:

We want to emphasize that we do not know if the emails, provided to the New York Post by President Trump’s personal attorney Rudy Giuliani, are genuine or not and that we do not have evidence of Russian involvement — just that our experience makes us deeply suspicious that the Russian government played a significant role in this case.

But a media that was overwhelmingly desperate to ensure Trump’s defeat had no time for facts or annoying details such as what these former officials actually said or whether it was in fact true. They had an election to manipulate. As a result, that these emails were “Russian disinformation” — meaning that they were fake and that Russia manufactured them — became an article of faith among the U.S.’s justifiably despised class of media employees.

Very few even included the crucial caveat that the intelligence officials themselves stressed: namely, that they had no evidence at all to corroborate this claim. Instead, as I noted last September, “virtually every media outlet — CNN, NBC News, PBS, Huffington Post, The Intercept, and too many others to count — began completely ignoring the substance of the reporting and instead spread the lie over and over that these documents were the by-product of Russian disinformation.” The Huffington Post even published a must-be-seen-to-be-believed campaign ad for Joe Biden, masquerading as “rep

Yes, I Too Stand With Abp. Viganò and His Analysis of the Russia-Ukraine Conflict Kill Grid: The Vaxx, 5G and Smart Phones Are Inextricably Linked