Fighting in Ukraine is not about defending freedom; we lost that a long time ago.

Nine days ago, an American Marine corps veteran and Reddit user left the United States to fight the Russians with the Ukrainian Foreign Legion:

I am an EMT USMC vet with combat and trauma experience. I’ll be arriving the 9th with a decent amount of medical gear to volunteer where needed. I also have friends who are trying to accumulate recently expired medical supplies from hospitals in the state I’m from. I’m hoping to establish a logistical channel to get those supplies from them to me on the ground and to areas where they are critically needed.

Last night, Russian missiles hit his training base in Lviv, which is in the far west of Ukraine, near the Polish border:

Yes, I was here today and blown off the top bunk of my bunk bed in the barracks by the first missile. I made a long post about it but my posts don’t show on this thread for some reason. This is where all the foreign legion troops are, the 35 killed were all Ukrainian mostly due to a direct hit on their barracks next to mine. The base is destroyed, the weapons depot destroyed, possibly the end of the legion. About 60 people with their heads on straight including myself left after the attack. They’re sending untrained guys to the front with little ammo and shit AKs and they’re getting killed. The guys who stayed got bombed again in the afternoon and casualties aren’t clear. If you still want to to join them I’m not sure what the process will be since literally all the infrastructure supporting the training/ assignments of volunteers is all destroyed. The guys who are there now will all be going to Kviv and many will die, the legion is totally outgunned and has a few crazy Ukrainian leaders. After the attack one officer wanted to march everyone to Kviv and fight. Absolute insanity. Stay home.

Shocked interlocutors ask whether he really had deserted the Legion. Yes, he said:

Left the legion. Some are staying to help refugees – some going home. But it is clear that going to Kviv with the legion is nearly a fucking death sentence. A medic died the day after he got to the front, another guy tried shooting an AK at an [Armoured Personnel Carrier] and was killed immediately, a 10 man team was nearly wiped out – 8 killed and 2 crawled away. Your body will not be retrieved from the frontlines either.

Those trainees who did not desert were sent to die near Kiev. 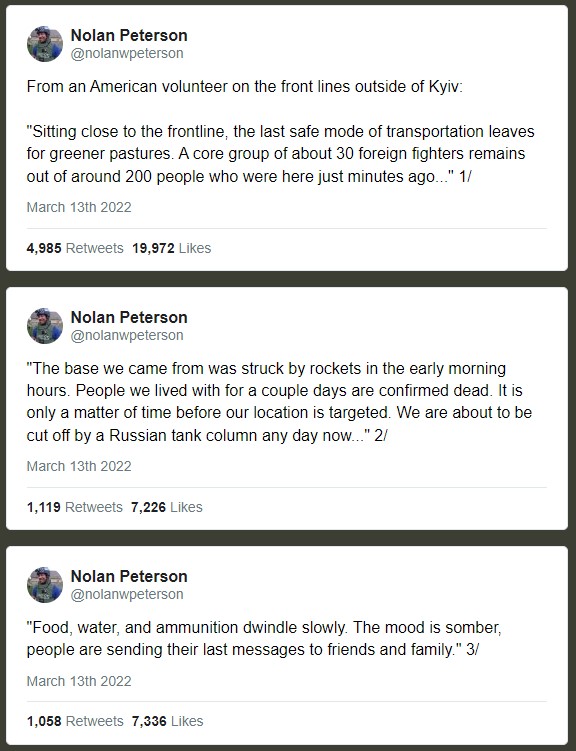 U.S. Biological Labs in Ukraine: What Could Possibly Go Wrong? Massive Conflicts of Interest at the NIH