Power Is in Tearing Human Minds to Pieces

One of the most important news stories that broke this week was about Hunter Biden’s laptop. Not because of the contents, as salacious and maybe damaging to the reputation of the President as it may be, but for a more profound and disturbing reason. The 2020 election may have been won on a misinformation campaign orchestrated by elements in the US government.

Glenn Greenwald lays this out nicely in his analysis entitled: The NYT Now Admits the Biden Laptop — Falsely Called “Russian Disinformation” — is Authentic.

One of the most successful disinformation campaigns in modern American electoral history occurred in the weeks prior to the 2020 presidential election. On October 14, 2020 — less than three weeks before Americans were set to vote — the nation’s oldest newspaper, The New York Post, began publishing a series of reports about the business dealings of the Democratic frontrunner Joe Biden and his son, Hunter, in countries in which Biden, as Vice President, wielded considerable influence (including Ukraine and China) and would again if elected president.

The backlash against this reporting was immediate and intense, leading to suppression of the story by U.S. corporate media outlets and censorship of the story by leading Silicon Valley monopolies. The disinformation campaign against this reporting was led by the CIA’s all-but-official spokesperson Natasha Bertrand (then of Politico, now with CNN), whose article on October 19 appeared under this headline: “Hunter Biden story is Russian disinfo, dozens of former intel officials say.”

Elements of our government have been engaged in pysops campaigns designed to manipulate the beliefs and thoughts of the American people, and these campaigns started long before COVID-19.

The New York Post, who was one of the victims of the censorship and smear campaign led by democratic officials, ex- CIA “reporters” (which usually means current CIA “contractors”) acting in collusion with big tech and the legacy media, also wrote about this in a piece called:
How Dem officials, the media and Big Tech worked in concert to bury the Hunter Biden story 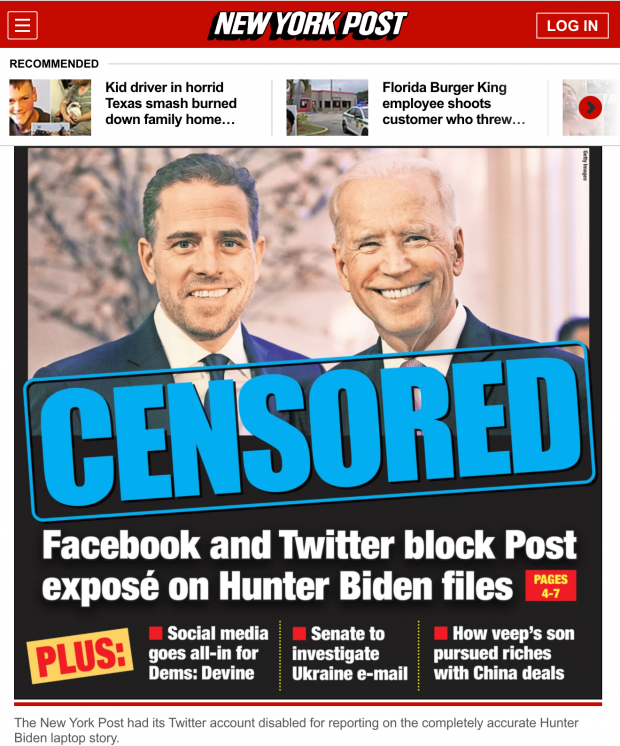 Everlasting, undying, soul-rending shame be upon you, Facebook and Twitter and Politico and all the others who covered up, denied and suppressed this newspaper’s true and accurate reporting about Hunter Biden’s laptop in 2020. You should be hurling yourselves at the feet of the American people, begging forgiveness. You should be renting billboards saying, “WE LIED.”

But most importantly, you should be hauled before Congress to answer humiliating questions.

These and other information purveyors owe us — not just this paper, but this country — restitution for what now looks like the most egregious and willful fake-news scam of our time. This paper’s scoops on Hunter Biden’s laptop in 2020 were labeled “Russian misinformation” (Politico), a “hoax” (Steven Brill of “fact-check” site NewsGuard), discredited by “many, many red flags” (NPR) and a “hack and leak” operation that had to be throttled (Facebook’s Mark Zuckerberg)…

The Post acted with transparency in explaining to readers how it got the Laptop from Hell. Moreover, nobody on Team Biden denied The Post’s report, because they knew or suspected it was true. Every news outlet in the country should have fronted the story at that point: “Biden team refuses to deny Hunter Biden laptop story.” A few months later, Hunter himself said the laptop “certainly” could be his, and the media shrugged instead of apologizing…

Even in the presidential debate where the matter came up, Joe Biden’s comments were not a denial but simply a deflection, and everybody who reported that he denied the laptop story was guilty of propagating fake news all over again. What he actually said was, “There are 50 former national intelligence folks who said that what he’s accusing me of is a Russian plant. Five former heads of the CIA, both parties, say what he’s saying is a bunch of garbage. Nobody believes it except his good friend Rudy Giuliani.”

That is what is called a lie in the real world that you and I inhabit. But not in the corridors of Washington DC or state-sponsored media.

This New York Post article documents that even in 2020, elements of the US government, which some might call the “deep state,” were engaging in misinformation (translation- lies) meant to alter the outcome of the upcoming election. And there is a good chance that their efforts succeeded, and that they swayed the election in favor of Biden.