For the first months of the pandemic, I was a Corona hysteric. I had the virus very early; for four days I was extremely sick, and as I recovered and Europe began to lock down, I read the panic pornography of Tomas Pueyo and thought we might well be facing a mass casualty event. Everything reinforced this message, from obscure Twitter accounts to colleagues to German state media. There were critics too, but in those early days it was hard to find them. Those who came to my notice turned out to be saying a lot of things that were just wrong, and in this way they played into the hands of the containment regime. It was easy for casual readers to think that sanity and good judgement lay entirely with Team Lockdown.

I found Berenson’s Twitter account in mid-March. I didn’t agree with him most of the time, but it was clear to me that he was more than just another crank. He had a way of pointing out simple facts that nobody in the press wanted to talk about, and – more importantly – that you didn’t realise nobody was talking about. Totalising media discourse has a way of appearing seamless and comprehensive even when it’s not, and it can be very hard to get outside of it. When Neil Ferguson published his panic model on 16 March, for example, I was pretty sure it was propagandist nonsense. (Even in my hystericist days I was never that far gone.) But not until reading Berenson’s tweets did I realise that the press was happy to report on dire Corona forecasts, and happy to report on dire mortality statistics, but very reluctant indeed ever to notice the ongoing failure of the models to predict anything. Little observations like that planted small doubts in my mind, which by late-summer bloomed into a total rejection of containment and all its crazy advocates. 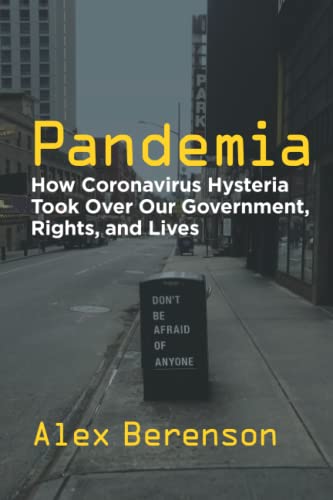 Berenson’s Pandemia comes with the first wave of major dissident monographs on Corona. Its companions include Michael P. Senger, Snake Oil: How Xi Jinping Shut Down the World; and Robert F. Kennedy, The Real Anthony Fauci: Bill Gates, Big Pharma, and the Global War on Democracy and Public Health. Importantly, all three authors are Americans. For reasons we may never fully understand, Europe has been ground-zero for Corona in the western world; hysteria hit the United States slightly later than it did here, and Americans trust their overtly partisan media far less than most of us on the Continent. All this means that critical views got an earlier start in the United States, and they were never as thoroughly deprived of oxygen as they were, for example, in Germany.

Berenson’s great strength is the same quality that earns him criticism now and again from people in our circles: He’s a centrist who notices things. Before Corona, he was best known for Tell Your Children, a book on links between marijuana use and mental illness, which the 1968 generation would prefer not to think about. His work on Corona has much the same flavour. It has brought him to vastly greater renown, and also sealed his systematic exclusion from establishment discourse. He’s been banned from Twitter, deboosted by the algorithms and attacked in the mass media. His latest book appears not with Simon & Schuster, who published Tell Your Children, but with the smaller, conservative press Regnery.

Pandemia is three things: A brief history of containment and the first part of the vaccine program in America; an inquiry into key empirical matters surrounding the lethality of SARS-2, and the efficacy of lockdowns, masks and vaccines (much of which appeared earlier in his four–part Unreported Truths series); and a kind of pandemic autobiography, where Berenson recounts his growing prominence on Twitter and how this affected his own life.

At his best, Berenson reads like a reporter from the late 1990s, before the overt politicisation of the American media, beamed to 2020 in a time machine. He considers all of the questions our own journalists have spent two years ignoring and advances only the most obviously defensible arguments. If you had to give one book on the pandemic to an English-reading normie, in the hopes of convincing him that masks, lockdowns and vaccines are not the way, Pandemia would be it. There’s a reason Berenson is not on Twitter anymore: Many people support the hygiene dictatorship because they believe flatly wrong things, and telling them the truth in simple language is a radical act.

Ukraine: A McKinsey & Co. Restyled Operetta of Corruption The West's Russia Sanctions Could Lead to Many Unpredictable and Unpleasant Outcomes