Our models have confirmed that Biden’s sanctions against all Russians have undeniably destroyed the global economy unfortunately precisely on time from its birth in 1950. Our capital flow models have confirmed that there has been an unprecedented cash outflow from China following Biden’s sanctions. Not only are we witnessing a withdrawal of Western capital from China realizing that the US has no interest in peace and China will be next, but we are also looking at collapsing confidence in globalization continuing from here on out. 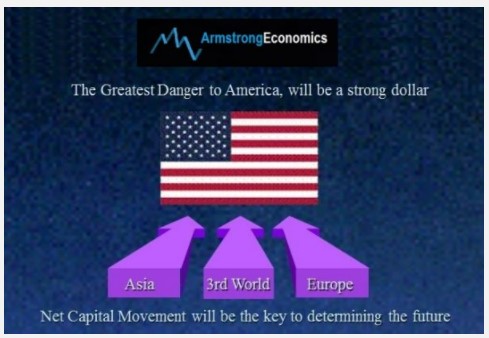 Our models have confirmed a highly unusual change in direction of the global capital flows which is even showing up in the emerging markets. China saw investors pull out from its share markets over concerns that we are clearly headed into World War III. Historically, the capital flows to the dollar during world war under the assumption that tanks will not be landing on the beaches of Virginia or California. This will tend to support the dollar, but not long-term. Biden’s sanctions attacking individual Russians have turned into a nightmare. Besides the Czech Republic seizing ALL assets of any Russian based upon their ethnicity as they were doing to the Japanese during World War II in the United States, now even Switzerland is doing the same thing.

These sanctions are not going to cause regime change and the overthrow of Putin with Russians running into the arms of the West. This is outright hatred of Russians as a people and they will have no choice but bond with China in an all-out war against this outrageous tyranny. I seriously doubt that Biden even understands what he is doing at the directions of these Neocons who have infiltrated the White House.

Our model has ALWAYS picked up the shifts in capital flows that precede war. This time we are witnessing outflows not just from China, but also from ALL emerging markets on a scale that is simply unprecedented. The timing of outflows is clearly linked to Biden’s unprecedented sanctions against the Russian people – not just Russia itself as a political state. This has NEVER taken place in history before with the single exception of the US sanctions imposed on Japan and the freezing of all their assets in the United States which preceded Pearl Harbor.

It pains me to have to even write this today. But clearly, those who understand where this is going is to World War III and make no mistake about it – this is INTENTIONAL! Even the official data has revealed that foreign investors have sold a net $5.5 billion of Chinese government bonds in the last few weeks. Biden stupidly threatened China that if they support Russia, they will suffer the same sanctions. This is just insane and it is DELIBERATELY trying to destroy the entire world economy.

Even from NATO, Secretary-General Jens Stoltenberg said at a press conference on March 24, “China must not provide economic or military support for the Russian invasion.” The previous day he accused Beijing of spreading “blatant lies and misinformation.” What they are calling “misinformation” is anything that challenges the West’s own propaganda. They want WAR for the demands of Putin are reasonable – Ukraine remains neutral, surrender Donbas and Crimea which are all ethnic Russians when Zelensky passed the language law that Russian is no longer to be an official language in Ukraine. That is the same as telling all Spanish if you do not speak English – get out.

All we can do is write to every political leader and DEMAND accountability for the Biden Administration is out to BUILD BACK BETTER, but that requires total destruction first.

Previous article by Martin Armstrong: Their Medicine Is Poison