Adam Andrzejewski, founder of OpenTheBooks.com and a frequent guest contributor to Zero Hedge (who most certainly does not get his talking points from the KGB), and who was also – until very recently – a contributor to Forbes, told Tucker Carlson on Monday that he was terminated from the magazine over his coverage of NIAID Director Dr. Anthony Fauci.

Andrzejewski, who recently made headlines with his investigative reporting that Fauci was the highest paid employee in the entire US Federal government, described how he was targeted for being critical of Dr. Anthony Fauci and exposing his yearly earnings.

“The National Institutes of Health’s six top executives wrote an e-mail to myself and Randall Lane, the top content officer at Forbes. It was couched as a corrections e-mail, but there were no substantial corrections and they quibbled about small things in my column. But that was the excuse Forbes used to cancel it,” Andrzejewski said.

He explained that within 24 hours of the email, he received a call that told him he was barred from publishing any additional material regarding Fauci.

Andrzejewski originally filed a Freedom of Information Act (FOIA) request on Jan. 28, 2021 regarding Fauci’s annual pay. After receiving only redacted documents, his group OpenTheBooks.com filed suit on Oct. 25. This led to the National Institute of Health agreeing to release its extensive documents but only incrementally over the next 14 months due to backed-up requests.

OpenTheBooks.com also originally reported in Jan. 2021 that Fauci’s salary had been listed at $417,608, the highest salary listed for any government figure including President Biden. In addition, Fauci has a retirement package that is expected to take in approximately $350,000 per year.

“If you take their salaries, tack on the taxpayer-paid cost of federal benefits at 30%, the two Faucis, their household income, paid for by taxpayers every year is $900,000,” Andrzejewski said.

Commenting on this sad development, Andrzejewski wrote that “Dr. Anthony Fauci controls the organs of state authority. If you are an independent voice, you are in jeopardy. Unfortunately, we are now an example. Forbes was a key platform for nearly eight years. I published 206 oversight pieces and a quarter million words of investigation on the platform. It’s too bad that Forbes folded under pressure from Fauci’s federal bureau.”

We can commiserate: after all it was right around the time that Anthony Fauci received an email on February 2, 2020 noting a zerohedge article speculating about the man-made origins of covid… 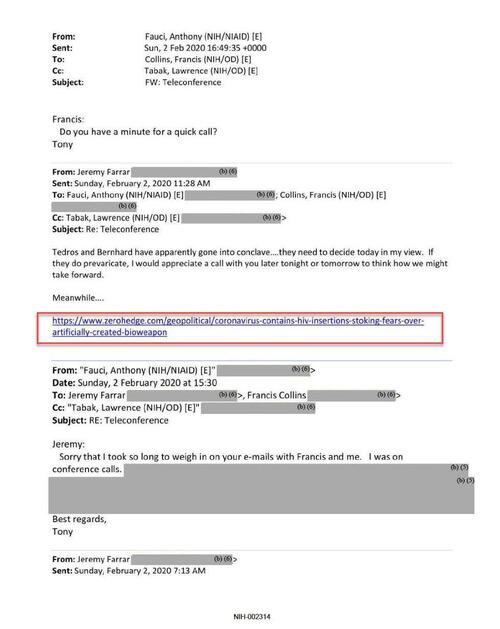 Previous article by Tyler Durden: Why the Kazakhstan Crisis Is a Much Bigger Deal Than Western Media Is Letting On