The War in Ukraine

Today at 12 noon EST, I'll be live on Rumble to discuss the ongoing conflict, its multiple dangers, and what role the U.S. should play, if any, in its outcome.

The outbreak of war between two or more nations is obviously one of the worst events that can happen for humanity, if not clearly the single worst. For that reason, when it happens, emotions are extremely high; nationalism and tribalism surge; the range of permissible debate radically shrinks; the political and media class unite in lockstep messaging across the political spectrum; and anyone even slightly off-key or questioning of that script is hunted down and held up as a heretic and traitor, as you can see happening here: 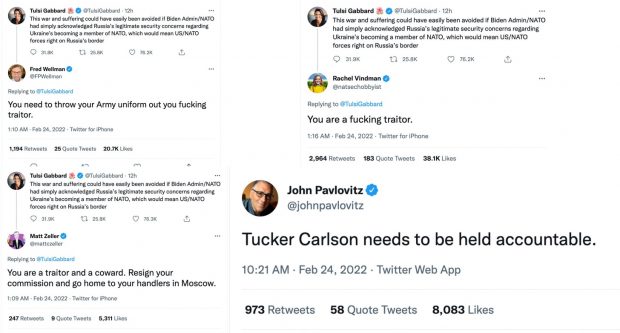 This toxic climate naturally fosters high incentives to either cling faithfully to the script or remain silent, at least until more space opens up for dissent. Attempting to do anything other than recite from the officially imposed book of conventional wisdom is particularly futile, at best, on social media. Thirty years ago, Noam Chomsky explained why the inherent constraints of network television — specifically, the demand that all points be made quickly, in three or four minutes between television breaks: i.e., what television news professionals refer to as “the need for concision” — ensures that conventional wisdom can only be affirmed but never meaningfully challenged:

Russia Demilitarizes Ukraine Mr. 'X' Is Rolling in His Grave