Inflation: A Stealth Tax with No Maximum Rate

All across the economic dashboard, inflation indicators are blinking red. Most recently, the Personal Consumption Expenditures (PCE) index, calculated by the Bureau of Economic Analysis, rose 5.7% from November 2020 to November 2021. That’s the biggest year-over-year surge since September 1983.

Many mistakenly attribute today’s rising prices solely to supply chain woes, and government officials are happy to fertilize that mythology—as Kamala Harris reflexively did last week in her rambling, didn’t-do-the-reading response to a question from Margaret Brennan:

Kamala Harris is asked about the inflation crisis and it did not go well. pic.twitter.com/rHre6FsbLu

The truth is, in the words of economist Milton Friedman, “inflation is always and everywhere a monetary phenomenon.” In other words, today’s rising prices are primarily the result of the Federal Reserve’s relentless creation of new money, which serves to facilitate the government’s multi-trillion dollar deficit-spending addiction.

Note, the Fed’s rampant money creation facilitates deficit spending, but, in the end, it doesn’t actually pay for it. Instead, it functions as a massive scam that hides the price of deficit spending by ultimately passing it on to all of us via inflation.

While the new-money effect on prices is compounded by supply chain failures, those failures are themselves driven in part by higher demand fueled by the extra cash in circulation.

When the government spends more than it takes in, the difference is funded by issuing Treasury bonds, bills, and notes.

In a rational, un-manipulated market, a profligate spender that’s already more than $29 trillion in debt would have to pay high interest rates to issue a new set of IOUs. Today’s 10-year Treasury rate, however, is just 1.5%. That utterly irrational rate is the direct result of the Federal Reserve’s manipulation of the Treasury debt market.

Specifically, the Fed routinely buys enormous amounts of Treasury debt, artificially pushing the interest rate down in the process. Because it’s prohibited from buying Treasury debt directly, the Fed contravenes the spirit of the law by buying it from large investment banks like Goldman Sachs and JP Morgan Chase—who profit from their role in what’s close to a money-laundering scheme.

What’s most critical to understand is that the Fed buys all those Treasury securities with new money created out of thin air. Unlike in earlier times, U.S. dollars aren’t backed by anything at all. Pouring trillions more of them into the economy can’t create enduring wealth, it can only sap the value of money that’s already in circulation. 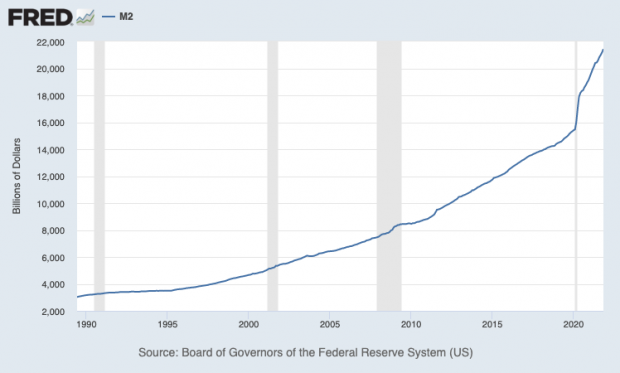 Fed-created inflation thus functions as a stealth tax: Rather than taking your money directly and openly, the government reduces the value of your money through the opaque tax we call inflation.

Once rightly charged with maintaining the value of the dollar—a mission it failed in spectacular fashion—the Fed now explicitly seeks to erode its value by 2% a year. However, with inflation accelerating well beyond that pace, it’s clear Fed officials appointed to play god with the economy have once again lost control, just as they’ve done through the cycle of booms and busts that have led us to this point.

My Bottom Line on the Existence of the Virus, Its Isolation and Sequencing Claim Jumpers