How NATO Empire-Building Set the Stage for Crisis Over Ukraine

Since the Cold War's end, "NATO exists to manage the risks created by its existence"

In his farewell address, George Washington said, “It is our true policy to steer clear of permanent alliances with any portion of the foreign world.”

What an offensive notion to Pentagon generals, weapon industry execs, DC think tankers and State Department bureaucrats, who, rather than avoiding permanent alliances, have been relentless in their quest to pile on new ones.

That impulse is vividly exemplified by the dangerously provocative post-Cold War expansion of NATO, and its consequences are apparent in today’s Ukraine-centered tensions with Russia.

NATO was created to oppose a Soviet empire that no longer exists. Had American presidents followed Washington’s sage counsel, they’d have spearheaded the dismantling of NATO upon the end of the Cold War. Instead, with America’s encouragement, NATO has nearly doubled its membership—from 16 countries when the Berlin Wall fell to 30 today.

With each new member, the U.S. government and American service members are tied to another far-off tripwire: Under Article 5 of the NATO treaty, an attack on any member country compels other treaty members to come to its aid. It’s the epitome of what Thomas Jefferson called an “entangling alliance.”

While the growth in the number of NATO countries and U.S. war commitments is unsettling, it’s the direction that’s been most troublesome: NATO expansion has marched the alliance relentlessly eastward, right up to Russia’s border.

To get a sense of how that’s perceived in Russia, imagine if, after the collapse of the Soviet Union, Russia set out to reinvigorate the Warsaw Pact by inviting Mexico to join a military alliance created in 1955 to oppose NATO during the Cold War. Americans would find such a move equally perplexing and unsettling.

The way NATO expansion proceeded, however, was even worse than that.

During the diplomatic maneuvers leading up to the reunification of Germany and the withdrawal of Soviet forces, Western leaders gave repeated assurances to Moscow that NATO wouldn’t grow eastward.

The most prominent and emphatic assurance came from U.S. Secretary of State James Baker, in a 1990 meeting with Soviet leader Mikhail Gorbachev. Baker said, “If the United States keeps its presence in Germany within the framework of NATO, not an inch of NATO’s present military jurisdiction will spread in an eastern direction.”

Several years later, however, NATO and President Clinton began considering just such an expansion—but not without controversy. American diplomat George Kennan, a towering figure in Cold War strategy who authored the policy of Soviet “containment,” was unequivocal in his opposition.

In a 1997 essay published by The New York Times, Kennan said, “Expanding NATO would be the most fateful error of American policy in the entire post-cold-war era…Such a decision may be expected…to restore the atmosphere of the cold war to East-West relations, and to impel Russian foreign policy in directions decidedly not to our liking.”

“Russia does not now pose a threat to its western neighbors and the nations of Central and Eastern Europe are not in danger…we believe that NATO expansion is neither necessary nor desirable and that this ill-conceived policy can and should be put on hold,” the group declared.

In 1999, Clinton and NATO plunged forward anyway—reneging on the assurances given to Moscow by their predecessors—and the first round of NATO’s post-Cold War expansion brought Poland, Hungary and the Czech Republic into the military treaty.

Subsequent expansion waves added another 11 countries, and the mutually beneficial buffer of states between NATO and Russia grew ever slimmer, vanishing in part with the addition of Estonia and Latvia. 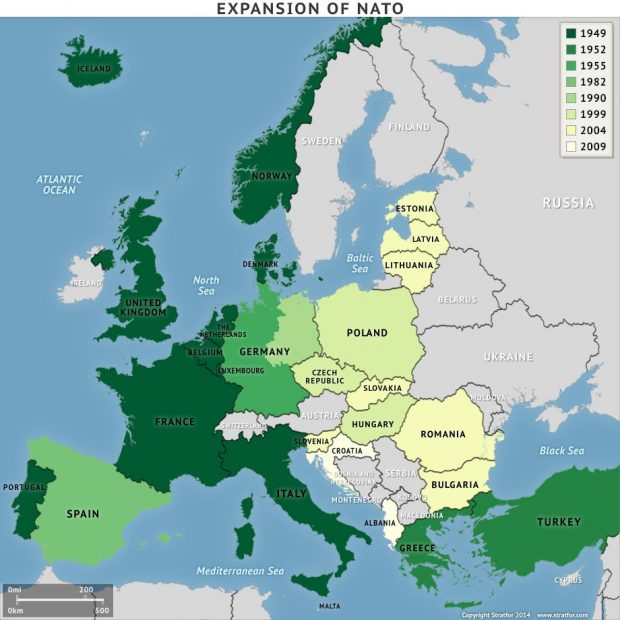 Though Russia may have grudgingly accepted NATO’s membership nearly doubling since the end of the Cold War, it views the prospect of Ukraine membership far more gravely.

That central factor in today’s tensions first came to prominence in 2008, when, at a summit in Bucharest, NATO officials considered bringing Ukraine and Georgia into the pact.