Donbas or Ottawa? The Dizzying Spiral of Government Violence!

I was toggling back and forth today between terrifying indications of a coming violent clash in eastern Ukraine and the reality of a violent clash between the Canadian government and peaceful anti-mandate protesters in Ottawa. I became dizzy and disoriented, as looking at troop build-ups on both sides in Russia-Ukraine and troop build-ups (as in the above photo from today) in Canada blurred more and more together.

Violence is the glue that holds government power together.

As ever, the battlefield was not only on the ground. Competing media narratives also battled it out, though the dominant (Washington/MSM) view in both situations was firmly in control of the microphone.

Biden told us today that he now (finally – after weeks of wrong predictions) knows that – for sure this time – Putin was going to sack and plunder Kiev with an army of hundreds of thousands (the number keeps increasing from one telling to the next). Asked how he is not finally convinced, he answered “we have a very good intelligence capability.” Well, considering its recent performance, that is a matter for debate.

A “false flag” from Russia was coming, said the warhawks who infest the Beltway. They would do something spectacular to establish a pretext for their planned invasion, we were told. Secretary of State Blinken said as much yet again in his cut-rate Colin Powell performance before the UN Security Council yesterday. And if for some reason they don’t attack Kiev, it’s because Biden’s steadfast defense of decency led Putin to “reverse course.”

As I said in an interview yesterday, the whole Washington performance is cartoonish.

Will the Russians attack? Well, they’ve been clear for years: a Kiev attack on three-quarters of a million Russian citizens in eastern Ukraine – who because of a Washington coup found themselves ruled by a government that came to power illegitimately – will be met with a Russian military response.

In the breathless world of the braindead media hacks, the world began yesterday. But actually we are seeing a situation similar to 2008 in South Ossetia, where Russian passport holders (and Russian OSCE monitors) found themselves under attack by Georgia. The result was lightening fast, effective, and limited. Russia could have held and “regime-changed” Tbilisi. They did not. They made their point and left.

Even the US government-funded RFE had to admit that yes, in fact, it was Georgia that started the hostilities…and Russia that ended them.

Will Russia come to the aid of Donbas? Yes. They are not trying to hide it. They’ve been saying it for years.

The renowned historian and international relations theoretician Edward Luttwak – never accused of being a political partisan – put it best on Twitter:

The latest IC forecast: war is imminent and Russian forces will rely on exceptionally intense artillery bombardments, of Kiev too. That implies a reckless-gambler Putin, willing to make Ukrainians hate Russia & Russians forever. Neither is congruent with Putin’s record so far.

This is the difference between astute analysts and the cardboard cut-outs who populate the media. People of intellectual substance like Luttwak are not in the business to grind an axe. They analyze past behavior and seek the truth.

Sadly these days we are stuck with the former, with the latter being rarities.

Meanwhile in Canada, a liberal Western democracy has declared war – literally – on its own peaceful citizens who have gathered to oppose the absurd continuation of Covid-related mandates. Even insane San Francisco is in the process of eliminating its mandates, yet somehow Justin Trudeau’s Canada is willing to literally go to war with its own people to keep them in place.

What is funny about Canada (and this is also true of the US and many “Western” liberal democracies), is that they are very happy to preach to the rest of the world that peaceful protests must be allowed while literally at the same time brutally cracking down on same protests in their own countries. As in the late Soviet era, the hypocrisy is impossible to ignore. The regime disintegrates under the weight of its own contradictions. 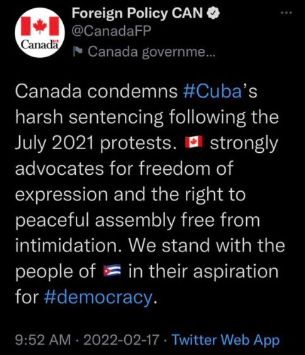 If like me you are toggling between Ukraine and Canada, watching violence and the threat of violence spilling out all over, you feel that old sickening feeling. You know things are about to get much worse. You know that the machine of evil is well-oiled with our blood and money. Our choice is to admit defeat or to keep fighting against government violence and those who promote it. We choose to fight.