It was in the font of pagandom, then, that Western Christendom was rebaptized.  A withered culture of paradise went into the font, and a vigorous but radically changed culture of utopia sprang forth.

The Age of Utopia: Christendom from the Renaissance to the Russian Revolution, by John Strickland

Strickland offers that the Renaissance (rebirth) was not a rebirth of the ancient pagandom of Rome, but of a Western Christendom that, in his view, had fallen into an anthropological pessimism and cosmological contempt since the time of the Great Schism.

While it was not ancient Rome, with its infanticide and sexual degradation, it also was not the paradisiacal Christendom that continued in the East.  It was a Christendom of humanism, the humanism born with Petrarch.

Christendom was, and in the East remained, a civilization directed toward the heavenly transformation of the world.  The West, with its immanent culture and without a transcendent source to sustain it, was unstable.  Theology went from the work of monks and bishops to a professional discipline.  Instead of the theologian being one who prays, he became one who thinks: 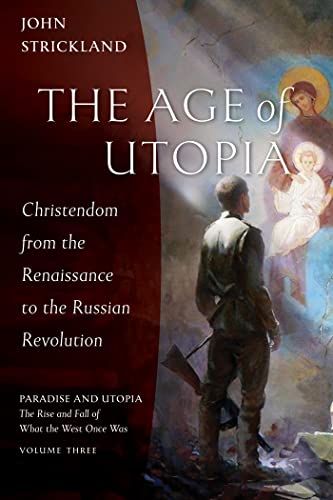 Scholasticism, with its Aristotelian underpinnings, did not so much open the heavens to man as set boundaries by which he must live in this world.

While this is presented as a criticism, I, obviously, see no problem with this.  We must know how to live in this world, while all the while becoming more Christ-like.  The Thomistic scholasticism of natural law offered this roadmap, fully conforming with Scripture, fully conforming with a Christian life, with man’s highest purpose being that of love – first of God, then, like it, of his neighbor.  Is there anything in that objective with which a Christian would disagree?  It need not be everything to still remain a valuable and meaningful contribution.

As has been offered earlier, it seems the scholasticism with which Strickland disagrees is that which comes after Thomas, in the fourteenth century, and the nominalism born from it.  Yet, he does not make this distinction at all clear – not directly, only hinted at.  It is unfortunate, as a proper understanding of natural law would go a long way toward Christendom fulfilling its mission on earth.

In any case, by this time, many Greeks would find their way to Italy, bringing Plato with them.  Such a cross-cultural exchange had not been seen for several centuries.  This time, however, the cause was not driven by a zeal for traditional Christianity:

Many of the Greeks who now came were predisposed to interpret the impending collapse of Byzantium as a judgment against the Orthodox Church.

It was at this time, 1439, that a council of reunion was attempted, in Florence.  Emperor John VIII would attend, and he selected scholars whose “doctrinal adaptability” could be trusted.  In other words, he wanted to secure the aid of Rome in his desperate battle against the Turks.

One of these was Ecumenical Patriarch Joseph II, who would author a statement confessing the Roman Catholic faith.  He died before this could be accepted.  Another was Metropolitan Isidore of Moscow.  He emerged from the council a Roman Catholic Cardinal!  The same for Metropolitan Bessarion of Nicaea – who would one day be considered as a candidate for the papacy.

Only Metropolitan Mark of Ephesus remained faithful.  He rejected papal supremacy and purgatory – both introduced after the schism and both which would also be rejected by the later Protestants.  All but Mark would sign the document.  Yet, when the delegation returned east, they found a population unwilling to accept this change.  This resistance carried the day.

Meanwhile, humanism was the West’s attempt to grope for the deification that, in the East, was to be found via the participation of body and soul in the divine energies of the incarnate God.  At the same time, the papal court would be described, even by Pius II as one of gluttony and promiscuity.  Pornographic images would line the ceilings of the apartment of one cardinal, and even accounts of debauchery (“feasting and fornication…bullfights and dances”) by the popes and at the Vatican were common.

Of course, not all contemporaries were pleased with such ongoings.  Erasmus of Rotterdam would write a satirical dialogue on the efforts of the late Pope Julius II to force and then to bribe his way into heaven.  The Dominican friar, Girolamo Savonarola would attack the Medici system and the clergy who acquiesced to it.

Humanism was to him an abomination that deserved harsh judgment.  Most abhorrent was the new, naturalistic art it inspired.

His public “bonfire of the vanities” would consume many of the most modern paintings.  His influence was brief, as he was overthrown and executed.  It would be the work of the later Protestants that would, ultimately, destroy religious art on a greater, and more successful, scale.

Enter on the stage Giovanni Pico della Mirandola.  If you thought Luther had a long list, it was nothing compared to Pico’s Nine Hundred Theses, touching on every aspect of religion.  He intended to hold a symposium in Rome in 1487 to debate these, but it never occurred.  Pope Innocent VIII ordered its suspension, and, not surprisingly, many of Pico’s theses were declared heretical.

His Oration on the Dignity of Man would offer some remarkable arguments.  Man is completely free of God and creation; he is autonomous (self-ruled):

For Pico, man is free to stand proudly alone, like Prometheus, to create his own destiny.

Pico had God tell the first man that he was free to choose any course of life that he wishes:

“We have given you, O Adam, no visage proper to yourself… The nature of all other creatures is defined and restricted within laws which We have laid down; you, by contrast, impeded by no such restrictions…”

You get the idea.  In the face of this, Thomistic natural law really is not something to be condemned or ignored by the Orthodox Church (yet it is, one or the other).  In any case, for Strickland, this was all a natural consequence of the Great Schism, and the culture of pessimism that followed.

In this humanist, Renaissance era, art would transform from iconography to the more natural forms of Raphael and Michelangelo.  Mary and the infant Jesus were painted as indistinguishable from your family portrait – beautiful, no doubt, but nothing to denote a transcendent nature.  Fat, chubby, innocent angels, depicted as little babies – nothing of the Archangel Michael slaying the serpent.  After all, humanist man was no longer in need of aid from the angels.

Hans Holbein would offer his Christ in the Tomb, depicting…

…the Son of God as a corpse whose fingers indicate the signs of rigor mortis, whose mouth gapes in a silent scream, and whose dead eyes stare at nothing.

If the words aren’t sufficient, here is a picture.

Then there is the well-known Creation of Adam, by Michelangelo, depicting man on the verge of animation by God’s touch, and not man as the image of God.  God, meanwhile, looks like Zeus.

And on this stage enters Thomas More, and his work Utopia – a neologism based on the Greek word for “nowhere.”  Finding nowhere in the West that offered a supporting culture directing its members toward the heavenly transformation of the world, he would first lay out a critique of the social customs of the English and follow this with a description of the perfect civilization.

It is not without ambiguity, for alongside economic equality and religious toleration, the Utopians practice authoritarian government and euthanasia.

This comprehensive vision would follow more than a century of despondency.  Humanism longed for the transformation of the world, but through the hope of a secular future, not a heavenly present.

This is what made the birth of humanism a turning point in the rise and fall of what the West once was.

Children of the Free States Karl Lauterbach on Why Omicron Is Actually in Fact Truly Dangerous, Part 32112431.